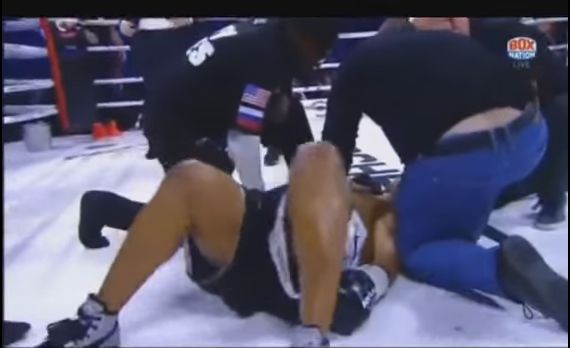 MOSCOW — Roy Jones Jr.’s 26-year boxing career is likely at an end after suffering a fourth round TKO at the hands of Enzo Maccarinelli.

Jones’ strategy was a modified version of Ali’s “Rope-a-Dope.” But with slowed reflexes, Jones’ attempts to catch Maccarinelli coming in resulted in errant shots and clinches. Through the the first three rounds, Maccarinelli did the most damage with straight rights and left hooks to the body when Jones leaned back on the ropes.

The end began with a right uppercut dropping Jones for a three count. Another inside uppercut, followed by a left hook and overhand right, put Jones on his face moments later for the TKO stoppage.

The defeat snaps Jones’ eight-fight win streak that dates back to December 2011. The win is Maccarinelli’s third straight since being stopped by Juergen Braehmer last year.

ENOUGH, ROY. This is a retirement that ideally should have happened 10 years ago. Since his last brutal KO to Denis Lebedev in 2011, Jones did lower the competition enough that he could get by without serious damage. But he got ambitious and this step-up against another faded champ in Maccarinelli shows just how much Jones’ skills have deteriorated.

Roy Jones Jr. turned pro in 1989 at the age of 20. 2015 marks 26 years of receiving punches. Who knows how badly his quality of life will be affected in his senior years. We do know that in 2011, he was getting treatment for brain damage. Boxing commissions worldwide need to save this man from himself.