Skip to content
"I respect you and I love you. I've said it in every interview time and time again," Minaj detailed. "If that's not good enough with you mama, then it's something deep-rooted in you. Something is bothering you inside...that's your insecurity." 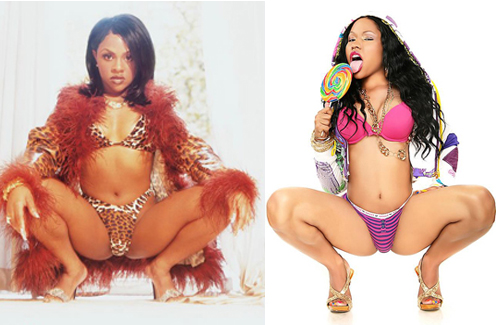 It wasn’t a diss record, but Nicki Minaj had some potent words for Lil Kim at a recent VIP listening session with Hot 97’s Angie Martinez.

Outside of a few subliminals on “Roman’s Revenge,” Minaj has been very strategic in not addressing Lil Kim’s derogatory comments about her. But after being asked directly about their issues, Minaj spoke on her disappointment with Kim’s behavior.

“I respect you and I love you. I’ve said it in every interview time and time again,” Minaj detailed. “If that’s not good enough with you mama, then it’s something deep-rooted in you. Something is bothering you inside…that’s your insecurity.”

Below, Nicki explains how things went when she met Kim, and how this whole “beef” personally hurt her feelings. The entire interview can be heard at Angie Martinez’s blog.

Well played, Nicki. It’s ironic to read other websites referring to this interview as ether, because Nicki sounds almost exactly like Nas did when he conducted his triumphant Funkmaster Flex interview after defeating Jay-Z on Hot 97’s battle poll (I’ll see if I can dig it up).

Basically, both interviews are a mixture of taking the high road, while also implicitly stating that “if it comes to the music, you aren’t fucking with me either.” When you compare this with Kim’s demeanor when she went at Nicki at the Queens nightclub, Minaj is the one that comes off calm and collected. In contrast, the Queen Bee seems erratic and volatile.

But we all know perception can change with one rhyme. Nicki Minaj’s example of having to “spank” someone you love, and being willing to revert back to her Queens roots, is a direct statement to let Kim know she’s now ready to handle it in the booth if necessary.

So now the ball is back in Kim’s court. I’m expecting a similar interview rebuttal. Them beefing is funny since it’s really like Kim arguing with her little sister. The influence is undoubtedly there. They’ve been giving different versions on why there’s friction, but the bottom line is that Kim just doesn’t respect her little sister’s ability. Time will tell if it’ll be a decision that the Queen Bee regrets.

Quiet as it’s kept, interviews can be used very strategically in battles.