Prison is the abode of regrets and failure.

Prison is the abode of regrets and failure. Nothing drove that home more than the opening scene of the season four premiere of Power, where we find our embattled protagonist, Jamie “Ghost” St. Patrick, in custody for the murder of federal agent Greg Knox.

Snatched from his club by Angela, Ghost replays all the events leading up to his worst nightmare. Tommy calling him a fool for dating a fed. His estranged wife Tasha echoing those sentiments. Whereas before Ghost had a measure of control over Angela’s emotions, he now finds his pleas of innocence returned with the icy glare of a woman scorned.

The problems are coming from all angles. Inside the jail, Ghost has to contend with a brutal C.O. (Charlie Murphy) that takes physical liberties on the basis that Ghost is a cop-killer. There’s little clean money Ghost and Tasha can put their hands on since Ghost cleared out their joint account during the brief war with Milan and Lobos. Adding to the humiliation in the St. Patrick household in a fed raid at the home, led by none other than Angela Valdez. 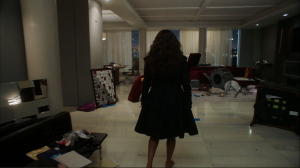 As expected, they trash the place and even confiscate Tasha’s (legal) gun. Neither Tasha nor Angela hold their tongue with each other, but Tasha clearly gets the upper hand by listing Angela’s discretions within earshot of her colleagues.

Long-time watchers of the show should find immense irony in Tasha’s current predicament. In season one, she took immense pride in her husband being the “biggest drug dealer in the city” and discouraging his desire to go legit with Club Truth. Well, here’s the other side the game — your man facing life in prison and the feds potentially seizing all your assets. With that said, no one told Ghost to go have an affair with a federal agent. You feel the pain, anger and disappointment on her face when she goes to see Ghost in prison. In the coming weeks, it’ll be interesting to see who she relies on. Tommy is there, but there’s someone else who might be a better confidant… 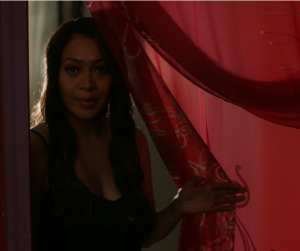 Well, back from hiding. Turns out that Tommy only had it in him to kill one woman last season. Instead of taking Keisha out like Milan suggested, he had her lay low until Milan was out of the picture. Now Keisha’s back to handle her portion of the shop and armed with the knowledge that Tasha and Tommy are using it to launder money. She was by Tasha’s side during the raid and ready to throw down on Angela, so don’t be surprised if those two lock horns in future episodes.

We got a bit of a swerve on this storyline. Last time we saw Tariq, he was drugged on Kanan’s couch being held for ransom. At the pleading of Dre, Kanan decides to back off the plan and have Tariq tell his Mom it was just a bad joke. Note how naturally lying comes to Tariq when Tasha and Tommy press him about who he’s been with all night. It mirrors the duplicity that Ghost has used with everyone in his life. And like his father, expect it all to come crashing down by season’s end.

Speaking of Kanan, the only one that senses his work behind these recent events is Tasha. It’ll be interesting to see how much more havoc Kanan can do with Jukebox and Ray Ray. If I had to place a bet, look for them to drop some bodies within Tommy’s distribution ring. A SECOND OPTION CAN NEVER BE #1

With Ghost locked up, Tommy’s now running things. That’s never worked too well in the past. His partners in the drug distribution conspiracy are already worried about how Ghost’s arrest, on an FBI murder rap no less, will affect their business. Plus Tommy will have to figure out how to placate the Serbian connects, who have also been informed of the brewing mess by Petar.

We also see that Julio, who we thought was the level-headed one of the crew, is a sucker for love when he brings a former prostitute to Club Truth for Dre to employ. With all the heat coming down on Ghost, you’d think the one place they’d want to keep clean is his supposed legit business. For all of Angela’s bravado this episode, there were several moments to remind her of her own culpability in this mess.

First was being confronted by Raina. All that abrasive energy Angela had for Tasha went out the window under that young girl’s questioning. What happened to wanting us to live with you? Angela had no answers, and the moment served as a strong reminder that the biggest victims of affairs tend to be children.

The second moment came with the introduction of a new character in smug, hotshot district attorney John Mak (Sung Kang). He taking over the Ghost investigation and makes it plain to Angela that her reckless bedroom romps with Knox and Ghost disqualify her from publically working on the case. However, Mak still expects her to work full-time sans any credit.

Still, I have faith in Angie to have Ghost’s back once the truth comes out. Angela’s not as smart as she thinks she is, but she goes hard for love. Once she realizes the worst about Ghost isn’t true, she’ll find a way to sabotage the case.

OTHER STORYLINES TO WATCH FOR

Was the premiere worth the wait? Sound off in the comments and be back next week for episode 2!