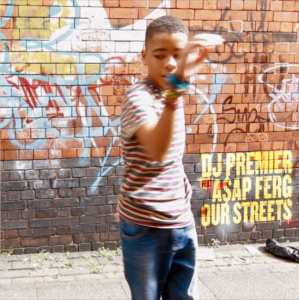 With the relaunch of the seminal Payday Records, DJ Premier and A$AP Ferg have linked to drop the first song for the label.

The song is exactly what you’d expect — Primo’s signature cutting and Ferg’s raw flow combining for that vintage NYC feel.

“It’s a dream to be able to work with the legendary DJ Premier on this record” said Ferg. “Primo has worked with all the NYC Hip-Hop icons and greats – Nas, Biggie, Guru, Hov, KRS-one, and The Lox. Just knowing I was working with him pushed me as an MC.”

“With Ferg, or anybody I work with, they already know my history so they know that I come from the 90s era” DJ Premier said. “Ferg just automatically said ‘Don’t do what I’ve been doing on my albums – I want you to do a Preemo style and let me show I can rap to that,’ so I was like ‘let’s do it.’ Everybody was happy off jump – no suggestions, no ‘I think we should go this direction’ – it was an automatic in, out, done, in one day.”

Originally formed in 1992, Payday was the first label to sign Jay Z and release his “In My Lifetime” single in 1995. Other artists that came through Payday’s pipeline include Group Home, Showbiz and AG, WC and the MAAD Circle, Mos Def (via UTD), and Jeru the Damaja.