Skip to content
Deontay Wilders talks with NYC media about his matchup against Gerald Washington. 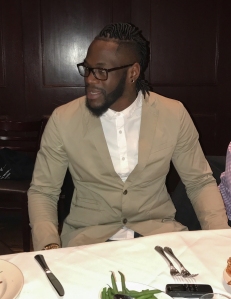 WBC heavyweight titlist Deontay Wilder met with the media today in NYC to promote his February 25 title defense against undefeated prospect Gerald Washington. Wilder spoke on a myriad of topics that included Washington’s chances, last year’s dominant KO wins over Artur Szpilka and Chris Arreola, and the desire for a big unification matchup before year’s end.

Wilder vs. Washington airs live February 25 at 8 p.m. on Fox.

There are a lot of heavyweights who say they want me, but at the end of the day, do they really want this? Everybody knows that Deontay Wilder comes with power.
I fight for the people, that’s what I’m all about. I like to give the fans a great fight at a reasonable price. Each fight I’m in I’m always exciting and well-prepared. I come to give people what they want to see when they see a heavyweight, and that’s a knockout.
Gerald Washington is a big guy I’ve seen fight a few times. I don’t think he’s ready to fight me, but he thinks he is. We’ll find out on February 25. I chose him because he’s always been respectful while always wanting the opportunity. He’s going to come ready to fight.
My preparation stays the same, even with the opponent change. I’ve been in situations where I’ve had to change a lot after an opponent dropped out, but Gerald being as good as he is and similar to Wawrzyk makes it easier. They have different styles but we’ll work on how to break him down.
When I knocked out Artur Szpilka, I thought he was dead for a few seconds. That’s just from natural, Alabama country power.

I’m still training while I’m here in New York. I have Mark Breland here with me helping me get a lot of good work in. I’m staying focused. When February 25 comes, I’ll be ready.
I definitely feel 100 percent, but we’ll see what it’s going to feel like in the ring when I apply this force to a human skull. When I’m in the gym doing work, I feel great.
I never really let my hand properly heal until this injury, because the bicep takes longer to heal than the hand. The time gave me an opportunity to really improve my left hand. I feel more polished now than I’ve ever been.
You have to have patience in this sport. The big fights that people want to see will be coming. I’m not scared of anyone and I won’t run for anyone. My team is on the same page and we’re going to keep working together and moving forward.
It’s all about adjusting. Each and every time I go through something inside or outside of the ring, it just makes me better and better.
Chris Arreola’s style was perfect for mine. Even with the injuries that I was suffering, I could still get the job done. I also had to fight through the injuries with Stiverne, because I hurt my hand in the third round of that fight. Being able to have these experiences has made my confidence even higher.