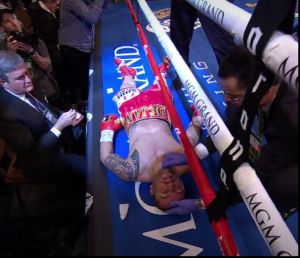 LAS VEGAS — Two fights into his comeback and Mikey Garcia can call himself a champion again. Earlier tonight, Garcia dominated WBC lightweight titlist Dejan Zlaticanin in route to a third round knockout on the undercard of Frampton-Santa Cruz II.

The normally aggressive Zlaticanin was defanged by Garcia’s sharp jab and footwork, which left the champion a sitting duck at long and mid-range. When Zlaticanin tried to lunge inside with his powerful left, Garcia met his shorter foe with counter rights.

It would be a wild left by Zlaticanin that began his undoing. Garcia countered with a right uppercut that sent Zlaticanin careening into the ropes. Dazed, Zlaticanin could not defend himself from a flush right hook.

The knockout gives Garcia a title in his third weight class and puts him in the conversation for a possible unification with the winner of the rematch between Jorge Linares and Anthony Crolla.