Skip to content
KRAKOW, Poland -- 39 year old Tomasz Adamek is hanging up the gloves after suffering a 10th round knockout loss last night to Eric Molina... 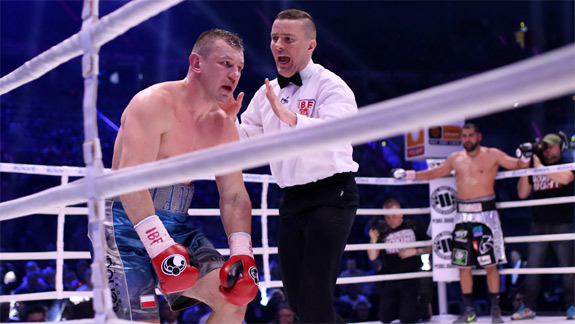 KRAKOW, Poland — 39 year old Tomasz Adamek is hanging up the gloves after suffering a 10th round knockout loss last night to Eric Molina.

Adamek, who could be elusive and outbox much larger foes in years past, could not avoid the Molina’s counter right hand. The former light heavyweight champion was rattled by these punches in the second and fourth rounds. He was forced to exchange big shots in the sixth and showed visible fatigue by the eighth stanza.

Despite the trouble, Adamek’s superior jab and footwork enabled him to carry a 88-83 lead on all cards headed into the 10th. Adamek was outworking his foe when a Molina right cross sent him careening under the bottom rope. Adamek beat the count, but was in no condition to defend himself and could not be saved by the bell, giving Molina the dramatic victory with one second remaining.

The comeback victory is Molina’s second win since losing by ninth round KO to WBC titlist Deontay Wilder last June.

Adamek, a veteran of 17 years, leaves the ring with a record of 50-5 (30 KOs) and titles won at light-heavyweight and cruiserweight.