Skip to content
If you're worried about 'Triple G', there's a new name that's coming in...Lemieux. 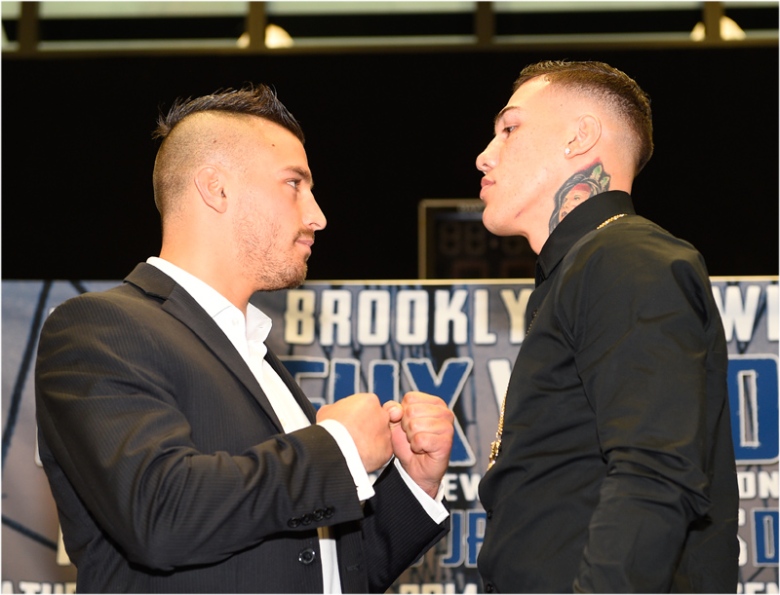 Below are photos from the presser and select quotes from the fighters. 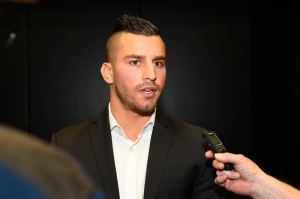 Thank you to everybody for being here, it is a great honor and great opportunity for me to be able to fight in Brooklyn at Barclays Center.

I’m very excited. I didn’t sleep much last night just getting excited to talk in front of you all.

I can’t wait for the fight. Gabriel Rosado is a great fighter. He comes to fight and he’s a very tough opponent. However, I’ve never felt so strong in a camp and trained so well. If you saw my fight against Fernando Guerrero, it is going to be a new David again.

I’m going to be a beast on December 6 and it’s going to be dangerous. I can’t wait. I’ve always trained hard, for people who don’t know my background; I’ve never cheated myself. I always put in all the work in the gym.

We’ve had some miscalculations and setbacks, but we’re back on track and we’re here to stay on top of the pyramid.

Brooklyn is a great city, when we landed here we could feel the energy. Then when we came here in front of Barclays Center we said, ‘wow’. This feels like home.

Not everybody knows me here, but after December 6, you will. If you’re worried about ‘Triple G’, there’s a new name that’s coming in…Lemieux. Wait until you see my fight and then we will speak.

I’m here to put on the best show and with Rosado, he’s a great fighter so it’s going to be fireworks and dynamite in the arena. I can’t wait. 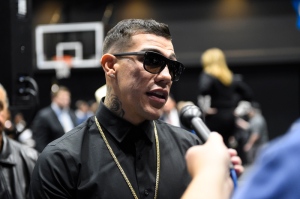 It’s interesting how this fight came about. I was supposed to be the co-main event on Hopkins’ card against Kirkland and that fight fell through.  Golden Boy told me not to worry and they stuck to their word.  The next thing you know, I’m the main event. One door closes another one opens.

I’ve been in a lot of fights that were controversial, but that is boxing. Fans love the drama. Now I have the opportunity to showcase my talent.

Jesse Reid [Rosado’s trainer] has brought new life to boxing for me. A lot of the fights that I study are old fights so I knew about Jesse. One day I needed Jesse to wrap my hands and I realized this was the guy for me.

I respect Lemieux. He is a tough fighter. Just because I respect him doesn’t mean I am going to give him too much respect [in the ring].

When it comes to the caliber of fighters I have faced, I’ve faced better names. I need to use my experience and intelligence in this fight.

I’m excited to fight in New York City – the Mecca of boxing. It’s close to Philadelphia so I know the fans are going to come out. I’m Puerto Rican and there’s a big Puerto Rican population in New York and all of the Latinos will want to watch this fight.

I’m excited and I can’t wait to put on a show.

As we all know, my last fight did not go in my favor. I lost my first fight as a professional, so now I’m just looking to bounce back and do what I have to do.

I’m happy to be fighting again at Barclays Center, so a lot of my friends and family will come out and show support. You never know, my luck might just be right here at home.

I’m looking to put on an impressive show in my first comeback fight. I’m happy to be fighting before Christmas and New Years and I’m hoping to close out the year with a good victory.

Since I’ve started boxing I’ve dreamed of an introduction like that from Oscar De La Hoya. I’ve studied him for a long time, especially that jab. I want to thank him and Golden Boy Promotions.

I want to thank Brett Yormark, Barclays Center and everyone who gave me the opportunity to fight on this great stage.

It’s going to be a great fight, this has been my best year since signing with Golden Boy and I’m ready to go.

It is satisfying to know that we are coming back once again to the ‘Mecca of Boxing’ in New York – Barclays Center and to be able to give the fight fans real fights that they deserve to see.

What better venue than Barclays Center? We are always happy to be back in a town where boxing is appreciated this much. The fight fans know boxing. The fight fans live for boxing here in Brooklyn.

The three televised fights are competitive, compelling fights that the fans will enjoy. There is a lot at stake in the 150-pound and 160-pound weight ranges – you think tough competition. There will be no losers because every fighter is going to give it their all. Every fighter knows what is at stake.

“We are really excited about all of the fights on this card. The winners will move on to bigger and better things.

CAMILLE ESTEPHAN, President of Eye of the Tiger Management

We spoke for a while about this and now it is a dream come true. What better place than Barclays Center, what a beautiful place. Being here in New York City, all I can think is ‘wow.’

We’ve been working towards this for a long time, way before any news about Rosado’s other fights. We have a lot of respect for Rosado and he is a guy that is respected in boxing. What we want to do is stamp the boxing world with David Lemieux.

A couple of years ago when David and I started working together, we were sitting in a restaurant planning out what we wanted to do. We were sitting near a nice wall of bricks. There are a lot of difficulties in a boxer’s career, and what I said to him is that we we’re going to build a wall, every single day in the gym and every day is another brick in that wall. One day will end up with a great wall.

We have a grand vision and we’re going to prove it on Dec. 6. We think the best possible place to do it is here so we want to thank everyone who made it possible.

We’re going to have lots of people from Montreal coming, they’re ready. They’re coming to support David. There are some other great fights on that night in Montreal, but a poll started online saying which fight people wanted to see most. So far 58 percent want to see David’s fight, so hopefully we will bring them hear with us.

It’s my pleasure to be here. I first saw Gabe on television and he reminded me of the old time fighters like Rocky Graziano. You look at some of these young souls and you see tremendous power, tremendous speed and a big heart.

I told my son, ‘If I could ever get a chance to work with this young man, I would love it.’ I’ve had some great champions in Johnny Tapia, Roger Mayweather, Hector Camacho and others. This young man has really brought my heart back into boxing. I’m 72-years-old and he makes me feel like I’m 21.

He’s ready to fight anyone at any time, but he also has tremendous boxing ability and I don’t think that has ever been tapped into and I have the opportunity to work on these things.

The aggressiveness of Gabriel Rosado is what makes boxing worthwhile.