Skip to content
CARSON, CA -- A 10 year championship wait has ended. Kell Brook's journey to a world title paid off last fight with a hard-fought majority decision win over Shawn Porter, putting Brook in the discussion for showdowns with all top fighters in the welterweight division. It wasn't an easy fight (or a particularly aesthetically pleasing one most of the time), but Brook showed to be unflappable under Porter's constant reckless rushes and haymaker shots. How did Brook do it? Let's review... 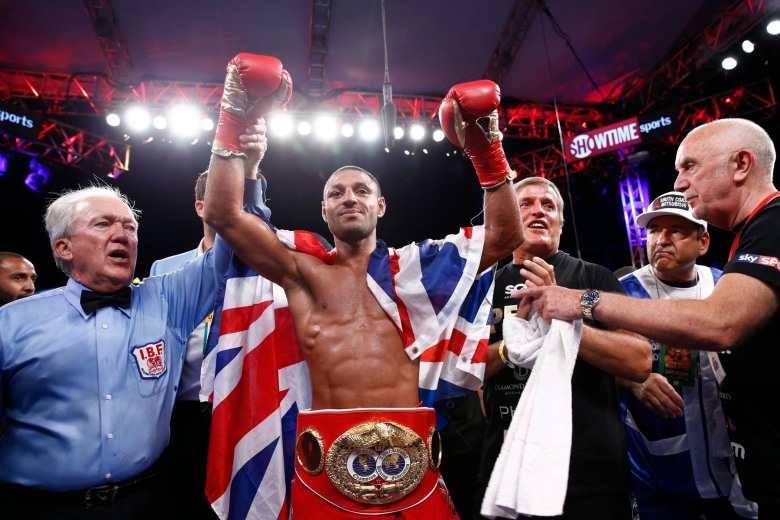 CARSON, CA — A 10 year championship wait has ended. Kell Brook’s journey to a world title paid off last fight with a hard-fought majority decision win (117-111, 116-112, 114-114) over Shawn Porter, putting Brook in the discussion for showdowns with all top fighters in the welterweight division. It wasn’t an easy fight (or a particularly aesthetically pleasing one most of the time), but Brook showed to be unflappable under Porter’s constant reckless rushes and haymaker shots. How did Brook do it? Let’s review…

A FAST PACE, BUT NOT ON PORTER’S TERMS: As expected, Porter came out with a frenetic pace, leading to lots of awkward tie-ups and indiscriminate clubbing inside shots from both guys. But, there was a distinct difference between this pace and what Porter did with Devon Alexander and Paulie Malignaggi — Porter wasn’t able to have his way inside. Those aforementioned fighters found themselves being walked backward and bullied. Brook was able at times to walk and push Porter backward, leaving just enough room for Brook to land flush lead jabs and rights hands (one of the latter shots punctuated the end of the first and knocked Porter right into his corner).

A few people on Twitter expressed their displeasure at Brook’s holding whenever Porter got inside, but from my view the holding wasn’t enough to negate Brook’s punch accuracy. And even when they did get off shots in close, Brook’s work was normally better, most notably seen in the seventh when he briefly stunned and stumbled Porter with a deceptive right uppercut.

UK DURABLE: Due to the Carson Jones fights and even Senchenko briefly hurting Brook in his last fight, many thought Special K wouldn’t be able to physically hold up under Porter’s mauling. In the second round, Brook was already cut above the left eye due to an accidental butt. The cut wouldn’t be a factor, and ironically it was Brook who dealt with his cut better — Porter would get one above his right eye in the later rounds that left half his face wearing the crimson mask.

NO PLAN B: I interviewed both fighters last week. The most telling comment came from Porter, who said Brook was just a basic fighter, an opponent that would be less trouble than Alexander or Malignaggi. The one who ended up looking basic was Porter, who was completely lost once Brook’s clinching nullified his mauling. Anytime there was space between them, Brook made him pay with left jabs and right crosses. And although Porter was never close to going down, Brook’s heavy shots did put him in complete retreat several times during the night.

KHAN UPSTAGED: Remember a few years ago when Amir Khan told Brook that he needs to fight some elite competition before mentioning his name? Well, Brook’s win over Porter surpasses anything Khan as done at welterweight. He made sure to take a little dig at Khan in his post-fight interview, proclaiming himself the best UK fighter at welterweight.

“I’m ready for a mega, mega fight next,”declared Brook.”I’ll take on Keith Thurman or Floyd Mayweather. Amir Khan should get in queue now. I’m the world champion now so they’re all going to want to fight me.”

To his credit, Brook told me personally he likes Thurman’s style and feels they can make a great fight. I agree, and a fight like that would be perfect for turning Brook into a boogeyman for young US fighters. And if Khan does take and get past Robert Guerrero in November, Brook vs. Khan in the UK does great numbers.

DIRRELL NOTCHES WORLD TITLE WIN:  Anthony Dirrell became the first Dirrell brother to win a world title with a clear unanimous decision win over Sakio Bika (114-113, 116-111 and 117-110). No one really has it easy with Bika, but Dirrell at times made it look so with how often he was able to drill the Aussie veteran. It was still an absolutely ugly fight with referee Jack Reiss flat-out telling the guys they were looking like “shit” early with all the grabbing and fouls.

At 35, Bika finally appears to be slowing down. He didn’t have the stamina we usually see in the later rounds. This allowed Dirrell to stay off the ropes and outbox Bika at ring-center.