Skip to content
BROOKLYN, NY — Danny Jacobs achieved the biggest win since his return from cancer in knocking out Jarrod Fletcher in five rounds to win the “regular” WBA middleweight title... 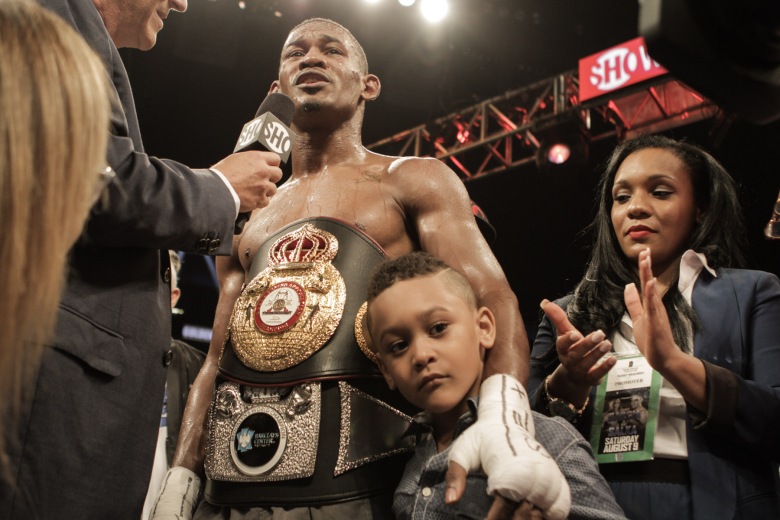 BROOKLYN, NY — Danny Jacobs achieved the biggest win since his return from cancer in knocking out Jarrod Fletcher in five rounds to win the “regular” WBA middleweight title.

Fletcher never got any significant traction in this fight. The first round saw him tasting the canvas after being stunned by a compact left hook. Jacobs’ faster hands and superior power had him constantly knocking Fletcher backwards and off-balance whenever he connected.

Jacobs had a brief period in the fifth where he looked to be preserving energy. Fletcher was able to land several solid right hands, but quickly found himself back on the canvas for good after being hurt by a right hook counter inside.

WHAT’S NEXT: Make no mistake — Gennady Golovkin is the WBA middleweight champ. The WBA has him officially as the “super” champion, which allowed them to make last night’s fight with Jacobs for the “regular” WBA title. It’s a bunch of nonsense, but that doesn’t mean Jacobs doesn’t have some intriguing options on the table.

His best option is WBO middleweight titlist Peter Quillin, who is in dire need of a credible opponent. Quillin went on record last night as stating he wants it and both guys being from Brooklyn makes it an easy sell for the Barclays.

Congrats to my brother @DanielJacobsTKO on becoming a champion! You know where to find me

If that can’t happen, another Brooklyn showdown I’d love would be against Curtis Stevens (a long shot considering Jacobs’ Al Haymon affiliation and Stevens being under Main Events) or Canadian slugger David Lemieux.