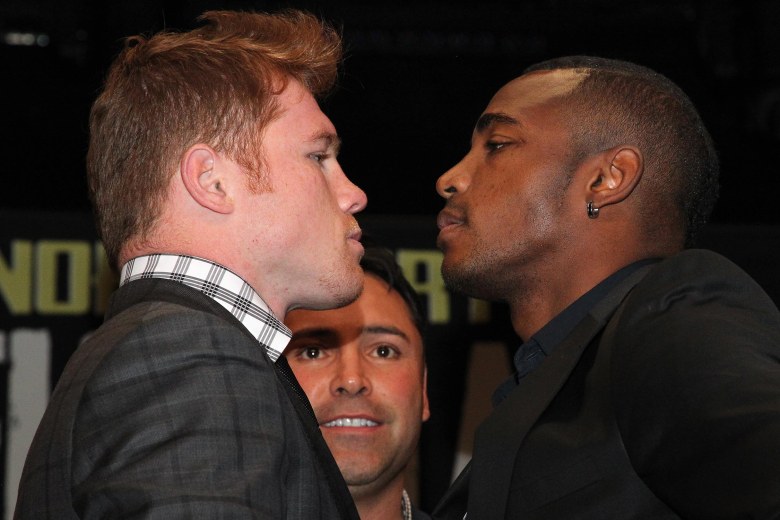 From the first stop in Los Angeles on Monday, Canelo has been adamant that he took this fight due to demands from fans and the desire to silence the accusations he’s “ducking” the Cuban technician.

“Lara has talked a lot, [to the fans] you guys asked for the fight, and here it is,” said Canelo. “What you guys ask from me, I will give you. A lot have asked me, ‘Why did you take this fight?’ I say ‘Why not? I will fight anyone. Style doesn’t matter.'”

“The reality is that a year ago the fans didn’t really know Lara. Nobody really knew him. But he’s been talking so much that now it’s built up and the fans asked for it so I wanted to give them what they wanted.”

Canelo is coming off a one-sided beating and stoppage win over Alfredo Angulo, a fighter who dropped Lara twice before the Cuban scored his own TKO win off an eye injury. Regarding the danger of facing another hard puncher, Lara feels he has enough experience to counter Canelo’s strength.

“I’ve always done my job against the best fighters in the division. I’ve faced a lot of hard punchers so I’m not worried about his power,” Lara stated. “Canelo knows, just like everyone in the division knows. No one wants to fight me because I’m dangerous and I beat everybody. He took this fight because of the pressure I put on him.”

From Canelo’s perspective, Lara’s “pressure” amounted to a personal affront to his Mexican heritage.

Canelo and Lara will finish up their press tour this weekend in Puerto Rico. The bout airs on Showtime pay-per-view July 12.