Skip to content
Fan demand for a 9th Wonder-Nas collaboration goes back eight years, when the North Carolina producer remixed Nas' 2002 platinum album God's Son into God's Stepson. At the time, many cited 9th's soul-sample based production as a better fit for Nas' vocals than the producers he originally used (Salaam Remi, Ron Brownz, Eminem, Alchemist). 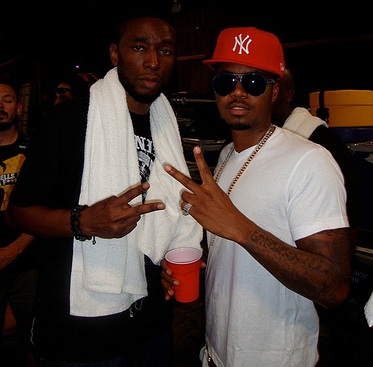 Everyone from Kanye West and RZA to Q-Tip and Bangladesh have been associated with Nas’ upcoming tenth studio album. One name producer who fans have clamored Nas to work with is 9th Wonder, who’s quietly contributed beats to the legendary Queensbridge lyricist.

Fan demand for a 9th Wonder-Nas collaboration goes back eight years, when the North Carolina producer remixed Nas’ 2002 platinum album God’s Son into God’s Stepson. At the time, many cited 9th’s soul-sample based production as a better fit for Nas’ vocals than the producers he originally used (Salaam Remi, Ron Brownz, Eminem, Alchemist).

When pondering Nas’ beat selections, 9th sees Nas as been making a concerted effort to completely separate himself from his 1994 masterpiece, Illmatic. While cited by many as arguably the greatest Hip-Hop of album of all time, the lyrical classic has also been used as the measuring stick by which all of Nas’ music is judged. Nas derisively references that critical slant on the intro of Stillmatic, another celebrated album which was named dualy to acknowledge and creatively move past his debut.

“I crawled up out of that grave, wiping the dirt, cleaning my shirt
They thought I’d make another Illmatic
But it’s always forward I’m moving
Never backwards stupid here’s another classic”

It’s a high standard of excellence that fans don’t demand from many emcees. According to 9th Wonder, who turned 35 in January, Nas is one of a handful of artists that still represent that late 20s to mid 30s demographic, a generation whose view of Hip-Hop was shaped by emcees like Tupac, Outkast, Redman, Snoop Dogg, Jay-Z, and the Notorious B.I.G. in the mid 90s.

“I just had that conversation in the car. I’ve been trying to figure that out. Nas is an anomaly, man,” 9th Wonder told Beats, Boxing and Mayhem. “He wants to get so far away from Illmatic, and everybody wants him to go back. I think he thinks we’re talking about his subject matter. We’re mostly talking about the sound. Nas is one of the few artists from our generation that’s keeping our generation alive from a mainstream perspective. For a mainstream standpoint it’s Nas and Jay-Z, there’s not too many others like them left.”

During a meeting earlier this year, Nas chose several of 9th’s beats. Now, the ball is in Nas’ court as to whether the selected tracks will end up on his new album.

“I spoke with him. I was actually in Atlanta when I played beats for him earlier this year,” 9th explained. “He picked some, [but] it’s a waiting game, brah. Unless they come down to my studio and specifically request me, it’s always a waiting game. People ask me ‘when are you going to work with so and so?’ It’s not when I want to work with this person, it’s when they want to work with me. So Nas is a tough cookie to get to.”

Nas has tentatively targeted December as the release date for Lost Tapes 2. His currently untitled 10th studio album is scheduled for 2011.