Main Events and Sergey Kovalev are headed to ESPN in 2019. 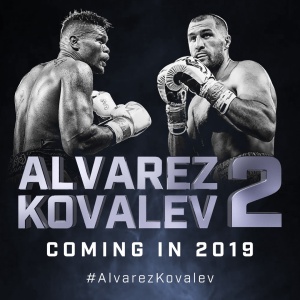 Main Events and Sergey Kovalev are headed to ESPN – and they’re bringing Eleider Alvarez with them. In a shocking announcement, Top Rank has confirmed the WBO light-heavyweight championship rematch between Alvarez and Kovalev will be aired on ESPN in 2019.

Alvarez won the title last month by knocking Kovalev down three times for a seventh round stoppage. Since then, the fighters have been negotiating terms for a rematch in Alvaerez’s home turf at Montreal’s Bell Centre.

It was assumed HBO would once again air the fight, having broadcast Kovalev’s last 14 contests going back six years.

But with the new seven-year deal between Top Rank and ESPN allotting for 54 live boxing events annually, Main Events couldn’t pass up the opportunity to keep their marquee fighter active and visible on the U.S.’s premium sports network.

“We are very happy to be joining forces with Top Rank and ESPN for what we expect will be another exciting and historic fight,” said Kathy Duva, CEO of Main Events. “Sergey was clearly winning his first bout with Alvarez when he just got caught. It happens. Congratulations to Alvarez for his spectacular performance, but Sergey is a warrior. He let me know that he is anxious to avenge this loss as soon as possible. We are looking forward to the new year!”

“Bringing this marquee rematch to boxing fans on ESPN is a great way to start 2019,” added Top Rank President Todd DuBoef. “The light heavyweight division is loaded, and both Kovalev and Alvarez have fan-friendly styles that will make for another gripping fight.”

With the departure of Kovalev, HBO has two remaining stars in Canelo Alvarez and Gennady Golovkin. Their anticipated rematch tomorrow night is also the last contractual HBO fight for both men.

Should Alvarez and Golovkin follow Kovalev’s footsteps, HBO Boxing might be a thing of the past come 2019.