Skip to content
Picks for the December 13 Khan vs. Alexander card. 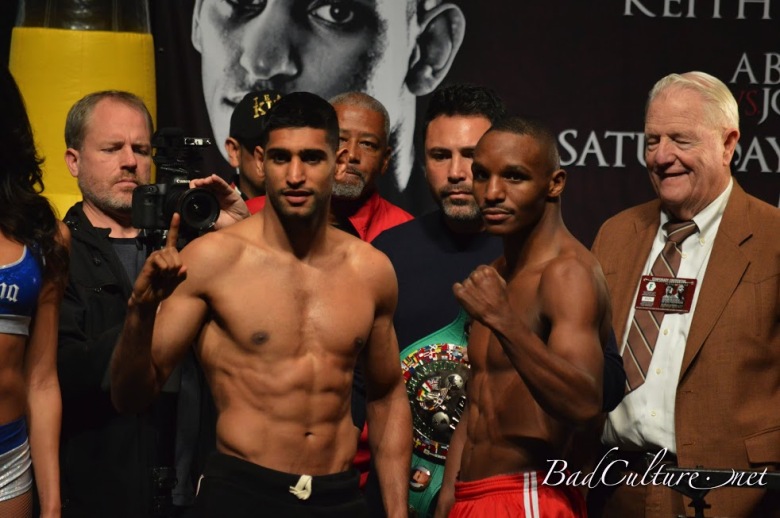 LAS VEGAS, NV — Amir Khan and Devon Alexander both made the welterweight limit of 147 for Saturday night’s big welterweight contest. Although the weigh-in was sparsely attended, the bout holds big implications for the career of Floyd Mayweather, who is in dire need of an opponent with star power for his usual Cinco de Mayo date (endangered by talks between Canelo Alvarez and Miguel Cotto). So does Khan become Mayweather’s savior, or does Alexander become the ultimate spoiler of 2014?

PREDICTION: Ever since this bout was announced, I’ve made one prediction and I’m sticking with it — if Amir Khan remains upright, he’s getting the decision. There is way too much money riding on this between Showtime and Mayweather. They have literally kept Khan protected for about a year to “save” him as a Mayweather opponent.

The problem, if you’re a Khan fan, is having faith Khan doesn’t fall apart against a tricky and talented opponent. It was only two fights ago where Khan was nearly run out of the ring by an old Julio Diaz.

What works in Khan’s favor is his punches are flashy and eye-catching to judges in close rounds (and they’ll be a few of them). Physically, you can also see Khan is very filled out in the upper body and shoulders, which should give him an advantage in the clinches.

As much as we joke about Khan’s chin, we’ve only seen him routinely hurt by big punchers. Alexander isn’t that type of fighter at welterweight. He’ll get buzzed with some left hand counters occasionally, but the workrate and speed of Khan should be enough to get the job done. KHAN BY MAJORITY DECISION.

PREDICTION: Keith Thurman TKO8 in a very exciting fight. Bundu is 40, having turned pro at 30. I think Thurman’s recent competition of durable guys like Jan Zaveck, Diego Chaves and Jesus Soto Karass will have him well-prepared for a guy in Bundu who can take a punch and brings rattling pressure.

Bundu will get some good work done inside, but overall Thurman’s speed and power will be the great equalizers. My pick for fight of the night on the Showtime side.

PREDICTION: Ramirez first came in at 131, missing the catchweight of 128. He came back an hour later at 130.5 and likely lost a portion of his purse. He looked very soft at the weigh-in and the skill gap favoring Mares ensures Ramirez’s shot at an upset is minimal. MARES UD.

PREDICTION: Not much is known about Bottai since he’s fought his entire career in his native Italy. History shows these type of guys are brought in for stat-padding, and I expect no less considering this is the fight opening the card. CHARLO TKO5