Skip to content
SAN ANTONIO, TX -- WBA juior middlweight titlist Erislandy Lara (20-2-2,12 KOs) is back in the win column with a dominant unanimous decision (119-109 twice, 117-111) over an outclassed Ishe Smith (26-7, 12 KOs) last night at the Alamodome. For most observers, picking Lara was an easy call. Smith was in for a style nightmare and that was confirmed early on.

For most observers, picking Lara was an easy call. Smith was in for a style nightmare and that was confirmed early on.

ONE ROUND AND DONE: The opening round was very competitive due to Lara standing his ground, allowing Smith to bang away to the body. But towards the end of the stanza, Lara’s accuracy with the right jab resulted in a noticeable bruise under Smith’s left eye. At the bell, Smith followed Lara to his corner to talk trash, advising Lara he was going to be there “all night.”

The incident would be Smith’s last shining moment of the bout.

Starting in the second, Lara established more distance with his footwork and used his six-inch reach advantage (“75 to “69), to keep Smith on the end of straight lefts. For some reason, Smith was sure that Lara would tire from running (Smith was heard before the third saying Lara would “break down”). That never happened, and for the rest of the evening Smith was frustrated by being unable to corner and getting outboxed by the Cuban at ring center.

The punch output wasn’t high on either end, but it was never a question as to who was doing the better work. Lara landed 40% of his power punches and never let it appear that he was being outworked, which was the major problem in his last bout against Canelo.

“I’m an experienced fighter and I know how to read my opponent. I read Ishe in the first round and I set up my game plan,” said Lara. “His body work didn’t affect me. I trained hard with Jack [Edward Jackson] and Ronnie [Shields]. He tried to break my concentration with his cheap tactics and dances, but I know how to control myself. I can control my impulses and I don’t let anything get in the way.”

THE AMERICAN DREAM NEEDS A PLAN B: Like any fighter that competes between 140 to 160 pounds, Lara reminded everyone that he wants a crack at Floyd Mayweather.

“I want Floyd for my next fight. He’s the best pound-for-pound, and I want to fight the best,” declared Lara. “I already beat Canelo and everybody else in the division.”

The Mayweather fight is not happening and neither is a Canelo rematch, so Lara will likely have to settle for someone like a Joshua Clottey, or possibly unifications with Cornelius Brundrage (IBF) or Demetrius Andrade (WBO).

UNDERCARD RESULTS: Badou Jack (18-1-1, 12 KOs) delivered a beating to Francisco Sierra (26-8-1, 23 KOs) and stopped him via a sixth-round TKO. Sierra was cut over the right eye in the first by an accidental head butt. However, he suffered the most damage from Jack’s body attack and uppercuts. Jack landed 52% of his shots overall, and 59% of his body shots.

“He was what I thought he’d be,” said Jack afterward. “It wasn’t a perfect fight for me. It’s good to be back but I was looking a bit too much for the knockout, I should have relaxed a bit and used my jab. I felt good, I felt strong out there.” 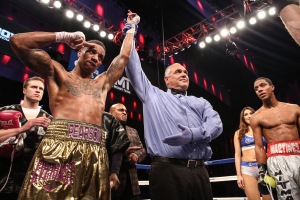 The opening was an entertaining scrap that saw Chris Pearson (12-0, 9 KOs) remain undefeated with a unanimous decision over Steve Martinez (15-2, 12 KOs). Pearson struggled early on with Martinez’s looping hooks to the body and head, losing three of the first four rounds on two judges’ scorecards. But by the fourth, Martinez begun slowing down and Pearson began using his jab more to control the action. Pearson finished strong in what was a good learning experience for both prospects.

“I knew he was coming forward, but I had to be smart because I know he’s a good fighter. I wanted to be patient and be smart and use my skills,” said Pearson. “It’s not always going to be a knockout or exciting but it can be dominant and I thought I was dominant.”

“I needed to pressure more,” admitted Martinez. “It was a much closer fight than the judges had it. It was a good fight, but I could have done better.”