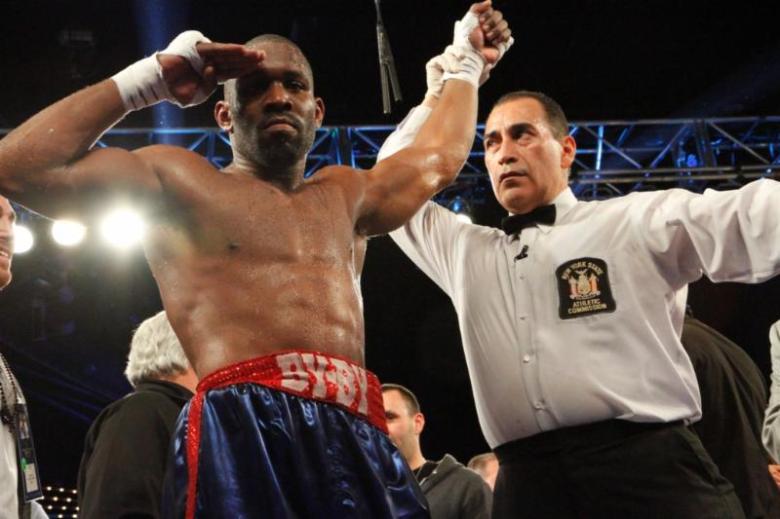 NEW YORK CITY, NY — Bryant “By-By” Jennings made a successful HBO debut in dropping an overmatched Artur Szpilka twice for a 10th round TKO last night at Madison Square Garden. While this win might not win over those who still think his Top 3 ranking in the WBC undeserved, it does put him in the mix to earn a title-shot this year after having his career in limbo following a split with Main Events in 2013. Mikey Garcia was the headliner and outside of a perilous moment early, had little problems with a surprisingly gunshy Juan Carlos Burgos. Onto the highlights…

JENNINGS WALKS DOWN AND BREAKS SZPILKA: The first couple rounds were intense. This was not due to big exchanges, but the fact both guys were looking to counter with big shots. Szpilka was the first to make mistakes in this regard, as Jennings used a high guard and kept him under constant pressure. Initially, Jennings’ offense consisted mostly on chopping straight rights and mauling body shots in clinches.

The pace began to wear out Szpilka in short order. The Polish heavyweight started to move back in straight lines with his hands down, allowing Jennings to tee off upstairs and to the body.

The lax defense and Szpilka’s tendency to lay on the ropes had him on his knees late in the fight from a left hand to the solar plexus. A left hook had him seeing stars and on the floor again in the tenth when he tried to fight his way off the ropes. Jennings closed the show in quick fashion with a barrage off power shots on a Szpilka that was cowering away in the final seconds.

Szplika is a very tough fighter and I give him credit for lasting as long as he did.” said Jennings. After the first knockdown I didn’t think he would last much longer but he showed great heart and almost went the distance.”

“I’m ready to step up and challenge for a world title. I’m going to take it one day at a time and see what my team presents me.  I want to thank Gary Shaw, Antonio Leonard, James Prince and HBO for giving me this opportunity.”

With heavyweight Mike Perez having fought last week (and looked very vulnerable), that’s probably the next fight before Jennings gets a title opportunity.

GARCIA WINS EASILY: Mikey Garcia’s bout was the main event, but the lack of sustained action against Juan Carlos Burgos had fans leaving and others booing. In round two, Burgos looked like he was going to make it a good fight when he buzzed Garcia with a right hand. The champion quickly regrouped and dominated the rest of the way, making Burgos tentative to engage after clipping him with several straight rights and keeping him on the backfoot. Without the luxury of going forward, Burgos’ solid body-punching was rendered a non-factor. The scores of 119-109 and 118-110 (2X) reflected Garcia’s dominance.

With both Garcia and Yuriorkis Gamboa in dire need of good fight, they should be looking no further than each other. All the other champions at super featherweight division are either Japanese fighters who are very good but unknown in the States (Takashi Uchiyama, Takashi Miura) or not as lucrative (Rances Barthelemy). The Gamboa of a few years ago was explosive enough that I’d have favored him to KO Garcia. This one, who’s appeared disinterested and sloppy in recent bouts, looks diminished enough to where this is a pick’em fight.