Skip to content
If you've been keeping up with the press for this Saturday's Showtime double-header featuring Abner Mares vs. Jhonny Gonzalez and Leo Santa Cruz vs. Victor Terrazas, you've heard a recurring theme from all four men that they intend to put on a great fight in the "Mexican tradition." What that essentially means is a lot of brutal exchanges, machismo, and ultimately a thrilling KO. Half the time, promises of breath-taking battles are hyperbole, but it's hard to doubt this group. At yesterday's final press conference, all four gave their last pitches as to why tomorrow night will be Mexican warfare at its finest... 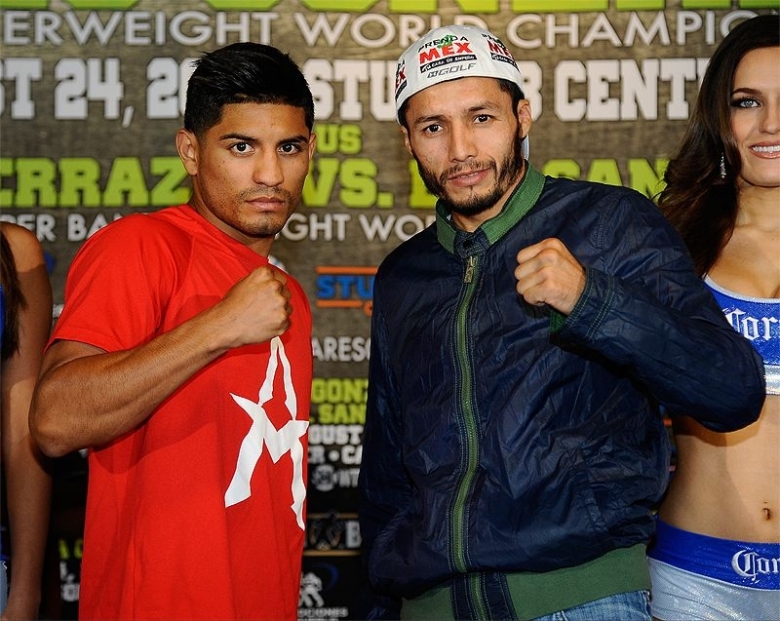 If you’ve been keeping up with the press for this Saturday’s Showtime double-header featuring Abner Mares vs. Jhonny Gonzalez and Leo Santa Cruz vs. Victor Terrazas, you’ve heard a recurring theme from all four men that they intend to put on a great fight in the “Mexican tradition.” What that essentially means is a lot of brutal exchanges, machismo, and ultimately a thrilling KO. Half the time, promises of breath-taking battles are hyperbole, but it’s hard to doubt this group. At yesterday’s final press conference, all four gave their last pitches as to why tomorrow night will be Mexican warfare at its finest. Mares’ WBC featherweight title will be on the line while Terrazas defends his WBC super bantamweight strap.

Be sure to check back later today at 3 p.m. for a link to the today’s weigh-in. Saturday’s card will start immediately following the premiere of All Access: Mayweather vs. Canelo at 10 p.m. ET. In addition, make sure to check out Showtime Extreme at 8 p.m. ET for the undercard bouts featuring Antonio Orozo vs. Ivan Hernandez, Joseph Diaz Jr. vs. Noel Mendoza, and Dominic Breazeale vs. Lenroy Thomas. 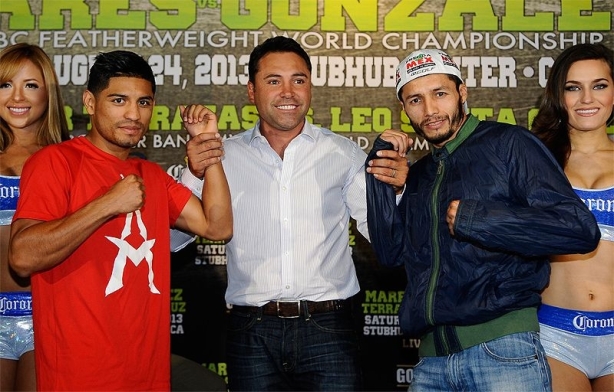 For the boxing fans in L.A., this is what boxing is all about and this is what they deserve. Abner Mares is a special talent that we are witnessing in our era. He’s a talent that doesn’t come around very often. He’s fought nothing but the best. We all know Gonzalez. He’s a machine who is a tough puncher and a very calculated puncher. Jhonny knows this is his opportunity. Everybody knows that.

When I first saw Abner fighting in the Olympics for Mexico in 2004 I just knew instinctively that he had that something that all champions have. There is no quit in his game and he has a long career ahead of him. And I wasn’t wrong about him. He’s already great and he keeps on proving it by wanting to only fight the best. And that’s what it takes to become great.

I want to thank the entire Golden Boy staff for making this possible. I know them all, from the guy who cleans the office to the head honchos like Oscar and Richard (Schaefer). And I want to thank SHOWTIME. I’ve been a headliner like eight times and it’s just a huge blessing. I won’t disappoint. I promise you a great fight like I always do.

This is another tough fight, but I want to fight nothing but the best. Champion, ex-world champion, whoever you bring, whoever the fans want me to fight, you know I’ll fight. I like and admire Jhonny Gonzalez. I like his style of fighting and know his camp because (Ignacio) ‘Nacho’ Beristain was my trainer for three years. I know the style and it’s nothing but finesse and nothing but pureness.

I’ve seen my share of fights from StubHub in the stands, but now I’m ready to experience coming out and putting on a real show for the fans. 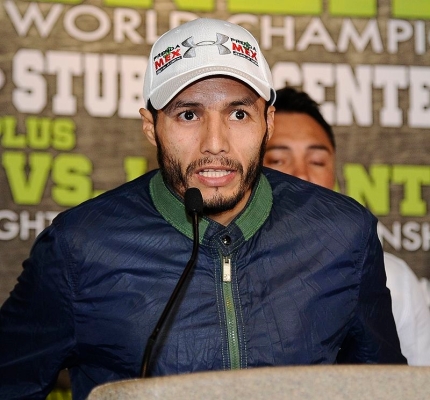 I want to thank Golden Boy and everyone involved for making this fight happen. I am very prepared. A fighter always wants to fight the best and I am fighting the best in Abner Mares.

The question I’ve been asked the most is if I am looking at this as my last chance at the bigtime. Well, I am not. One way to stop getting this question from the media is to win on Saturday.

Every fighter wants to get a shot at the world title, and then to win it, but my body feels good and I still feel I have a lot of fight left in me. I’m not looking ahead, but I can see a possible move to super featherweight in the future.

I may have more knockouts than he has fights (actually, almost twice as many), but he had such a great amateur career than I think we are tied when it comes to experience.

I am sure the biggest winners will be the fans and the sport of boxing because this fight is going to be a total war. 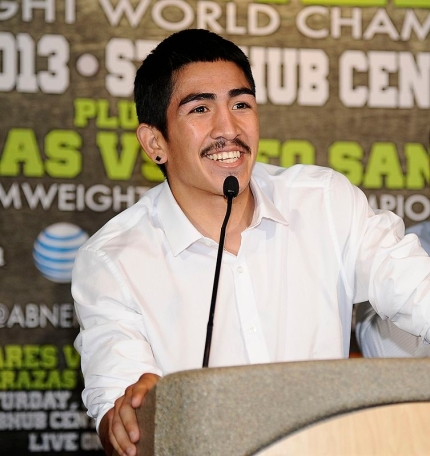 I’d like to thank Golden Boy, SHOWTIME, my manager, Al Haymon and everyone else. I’m 100 percent ready. I’m ready for war. I know that Terrazas is very tough and this will be the hardest fight of my career. I know that he’s been through as much as I have to get to this point. The good thing is that the belt will stay with a Mexican no matter who wins. May the best man win.

We’ve trained really hard for this and we’re ready. My career depends on this so I have to just leave it all in the ring. 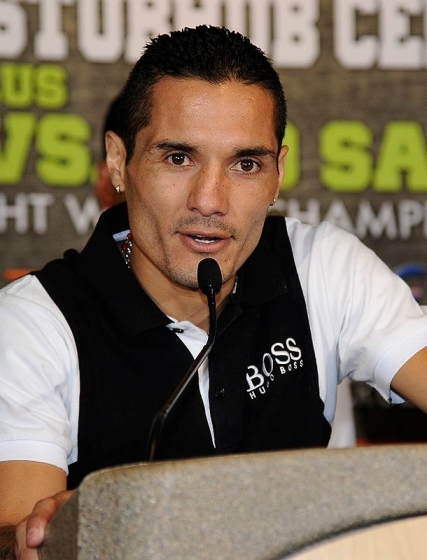 I think it is great to have so many Mexican fans behind me even though this fight is in his backyard. The support I am getting really makes me feel good.

We’re going to give the fans what they come out to see: a real fight with toe-to-toe, non-stop action.

As world champion, you have to defend against any and all comers. Every fight I’ve had, or he’s had, has been a war, and this will not be an exception. This is a great matchup, a fans’ fight. If I was a fan, I know for sure that I’d be watching.

I’ve studied a lot of tape on Santa Cruz. We’ll see on Saturday how it plays out. Fighters can change from fight to fight, but I know I am prepared and ready for anything. I think one of my best advantages is that I am shorter than he is and because of that I will be able to get inside. 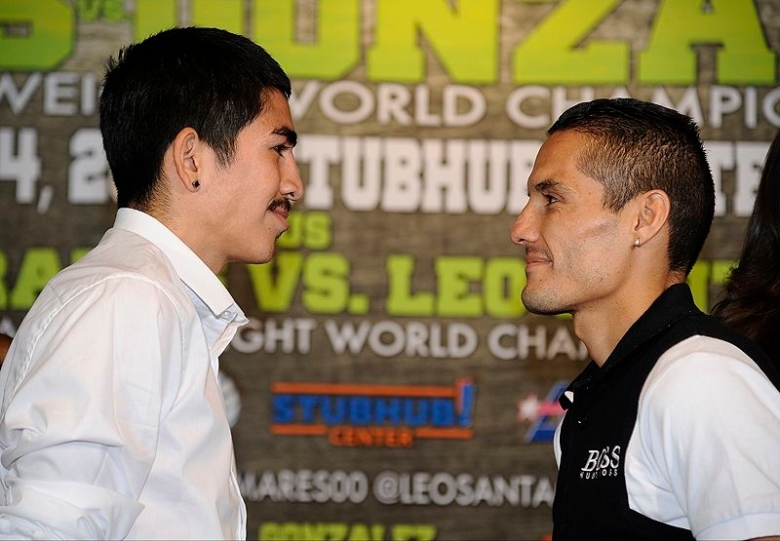 Mares vs. Gonzalez, a 12-round fight for Mares’ WBC Featherweight World Championship, will take place on Saturday, August 24 at StubHub Center in Carson, Calif.  The event is promoted by Golden Boy Promotions, sponsored by Corona and AT&T and will be televised live on SHOWTIME CHAMPIONSHIP BOXING® immediately following the series premiere of ALL ACCESS: Mayweather vs. Canelo at 10 p.m. ET/7 p.m. PT.  Also featured will be a 12-round world championship showdown between WBC Super Bantamweight World Champion Victor Terrazas and former IBF Bantamweight World Champion Leo Santa Cruz.  SHOWTIMECHAMPIONSHIP BOXING is available in Spanish using secondary audio programming (SAP).  Mares vs. Gonzalez is presented in association with Promociones Del Pueblo.  Preliminary fights will air on SHOWTIME EXTREME® (8 p.m. ET/PT).