Skip to content
"My shots were miles away. I expected that after 3 1/2 years away," admitted Hatton. "I was winning. I'm absolutely heartbroken..." 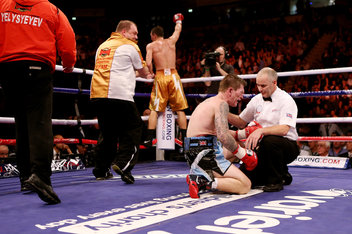 MANCHESTER, ENGLAND — Standing before his hometown fans, a teary-eyed Ricky Hatton could not utter the word “retirement.” He could only apologize for a back and forth battle in which he came up short, leading on all cards but suffering a debilitating body shot KO in the ninth to Vyacheslav Senchenko in Hatton’s first comeback fight since May 2009.

The sold-out crowd gave Hatton a huge ovation during his ring walk and the lyrics to his “Blue Moon” rendition reverberated throughout the arena. The opening round was marked by Senchenko landing the cleaner shots, particularly jabs and overhand rights. Hatton weathered these shots and got inside with short hooks to the body and left hooks to the head that kept Senchenko backpedaling.

Senchenko stayed competitive but struggled to meet the pace until the sixth, when Hatton’s pressure slowed just a step allowing Senchenko to re-establish his jab and right cross. Senchenko’s right hands couldn’t miss and the accuracy made Hatton become wilder with his own power shot attempts. In addition, Senchenko’s began timing Hatton’s rushes with right hands and the check left hook, the latter which Floyd Mayweather used to dispose of Hatton back in 2007.

With the momentum clearly with Senchenko, Hatton pressed harder in the ninth and had a decent round before catching a thudding left hook to the body. The punch brought Hatton to his knees, prompting the crowd to increase their cheers in hopes to will their fighter to the finish. But the punch was too devestating, leaving Hatton in a fetal position on his side well after the 10 count.

Hatton, who was leading on all scorecards (78-74 and 77-76 twice), was near tears in his post-fight interview and attributed the loss to recklessness and the three-plus year layoff.

“My shots were miles away. I expected that after 3 1/2 years away,” admitted Hatton. “I was winning. I’m absolutely heartbroken… It was a good shot to be honest; he nailed me with a few. I should have been looking for that… I’m just gutted. I wanted to fight for world titles… I have a lot to think about. I can’t keep picking me ass up off the floor. I’m not a failure.”

It was really tough seeing Hatton, bruised up and near tears, apologizing to his fans for not being able to get the win. Hatton’s pressure style is not conducive to a long career so it’s an amazing feat in itself that he was able to deliver such a competitive fight in his first bout after years battling drug addiction and depression. But the ring reveals the cold truth, and tonight it delivered a cruel, ironic twist to see Hatton destroyed with a left hook to the body, a signature punch of his that gave him a career-highlight knockout win over Jose Luis Castillo.

Hatton doesn’t want to retire on a loss, let alone back to back KO defeats. No fighter wants to go out like that. But tonight he gave it his all and deep down knows there’s nothing left. It’s up to his team to make sure he doesn’t forget that in the coming months if he tries to delude himself into another comeback. You’ve had a fine career, Hitman. Hold your head high and without shame.