Skip to content
Seth Mitchell has been forced to cancel a scheduled July 14 matchup with Jonathan Banks after doctors recommended a 6-8 week rest for a right hand injury. 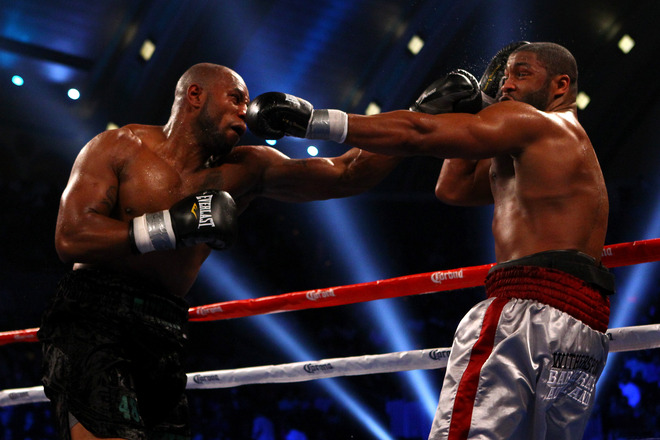 Seth Mitchell has been forced to cancel a scheduled July 14 matchup with Jonathon Banks after doctors recommended a 6-8 week rest for a right hand injury.

The undefeated Mitchell had been trying to train through the injury which was suffered in his third round knockout victory over Chazz Witherspoon on April 28.

“He injured his right hand in his last fight, which was five weeks ago, but he thought the (injury) would go away,” Golden Boy CEO Richard Schaefer told ESPN. “He went to see the doctor and the doctor said that nothing is broken but he recommended that Seth not do any sparring or have any contact for the next 6 to 8 weeks. He is scheduled to see a hand specialist next week and he will be evaluated to see if anything additional needs to be done.”

Mitchell is widely viewed as the best rising American heavyweight and was lauded by current world champion Wladimir Klitschko as a potential opponent in 2013.

The Mitchell-Banks bout was scheduled to be the undercard attraction of a junior welterweight unification bout between Amir Khan and Danny Garcia at the Mandalay Bay in Las Vegas.

It’s disappointing that Mitchell can’t jump right back in there but health comes first. Better to rest and get in a fall bout rather than try to fight through the injury and damage the hand even more. Chronic hand injuries are no joke and can totally alter a fighter’s career if not carefully treated.