Skip to content
With Pacquiao out of the picture, Floyd Mayweather and Miguel Cotto have come to terms to face each other on May 5 at Las Vegas’ MGM Grand. 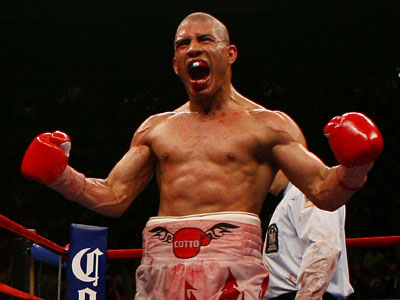 With Pacquiao out of the picture, Floyd Mayweather and Miguel Cotto have come to terms to face each other on May 5 at Las Vegas’ MGM Grand.

Mayweather confirmed the news earlier today when asked of his opponent choice during a meeting with the Nevada State Athletic Commission.

“Yes I do [have an opponent], Miguel Cotto,” said Mayweather.

Cotto, who defeated Antonio Margarito by a 10th round TKO in December, became a free agent after spending the majority of his career under Bob Arum’s Top Rank. Arum had been hopeful to resign Cotto to rematch Manny Pacquiao on June 9, but Cotto balked at the prospect of having to move back to welterweight, a weight he hasn’t fought at since losing to Pacquiao in November 2009.

Mayweather will be challenging for Cotto’s WBA junior middleweight title. Mayweather’s one fight above 147 pounds came in May 2007 when he defeated Oscar De La Hoya for the WBC strap.

“It will be a challenge for me to compete with him at this weight, but this is the type of test I thrive on and gives me the motivation to train harder,” Mayweather explained. “I have no doubt in my mind that my title belt collection will increase and Cotto’s reign as champion will come to an end on May 5.”

Formerly stable mates under Top Rank in the mid 2000s, Mayweather claimed that Arum blocked a potential matchup between them in 2005 at junior welterweight. In 2008, Mayweather retired and Cotto would suffer his first defeat to Antonio Margarito.

“I am here to fight the biggest names in boxing,” said Cotto. “I’ve never ducked anyone or any challenge in front of me. I have accepted everything to give the fans what they like… great and exciting fights. This is what the sport of boxing is all about; making the fights that the fans want and deserve to see. On May 5, stay tuned, because I will convincingly beat Floyd Mayweather.”

This should have happened back in 2008 but I’ll take it. Don’t be surprised if we see a catchweight in this bout. Style-wise if Floyd continues with his more flat-footed style, we’ll see some great action. It’ll be intriguing to see the inside work from both: Cotto’s great body attack against Floyd’s excellent defense and countering abilities. Mayweather most likely wins a decision, but Cotto will make it competitive.

It’s not Pacquiao, but do you see this as acceptable?