Skip to content
"Boxing is awesome," Couture stated. "I'm a huge fan of boxing...Hopefully there's a lot of boxers that will step in MMA."

James Toney’s nine months of MMA training were no match against MMA legend Randy Couture, who easily submitted the former boxing champion in one round.

Toney came to the ring looking immensely confident to the sounds of Rick Ross’ “BMF.” Despite scattered boos, Toney should no visible apprehension about stepping into a new combat arena.

Couture look determined and took less than 10 seconds before he shot on Toney’s legs and got the boxing star on his back. From there Couture was methodical, working short hooks to a hapless Toney’s midsection and head. Toney tried to stifle the attacks by covering up and pulling on Couture’s head, but the Natural had no concern for Toney’s defense. After pushing Toney into the cage, Couture punished him with more ground and pound before locking in an arm triangle. The crowd knew Toney was out of his depth, and carried on “UFC” chants throughout the drubbing.

Toney tried in vain to make it to his feet, but only got to a knee before being pushed back down. Toney motioned to the ref he was ok. Couture seemed impressed and could be heard audibly stating “you didn’t want to tap out, huh?”

Like a cat playing with a doomed mouse, Couture rained down a few more punches before again locking in the arm triangle choke. Toney was now on his back and completely helpless, and had no choice but to tap out.

Couture conceded in the post-fight interview that it was unrealistic to expect Toney to become a capable MMA fighter after just nine months. In addition, he praised Toney for stepping into the Octagon and hopes more boxers will do the same.

“Boxing is awesome,” Couture stated. “I’m a huge fan of boxing…Hopefully there’s a lot of boxers that will step in MMA.”

“I didn’t think he was going to be so aggressive at first,” a sheepish Toney said afterward. “I think my ground game is ok.”

On whether he’ll continue his MMA experiment, James Toney promised a return to the UFC. 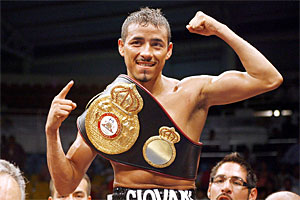 The first three rounds of the contest were vintage Calderon. The 35-year-old champion picked off the wild swinging Segura with sharp left hand counters. The huge 24×24 ring gave Calderon ample room to play matador, and he made Segura look foolish with counter shots. By the fourth, Calderon gained confidence that he had the fight in control and stood toe to toe with his younger opponent. Through quickness and accuracy, Calderon got the better of a late exchange off the ropes and seemed poised to possibly get a rare KO in the later rounds.

But in round five, it was Segura who nearly earned a knockout. He corned Calderon and strafed him with vicious body shots. Calderon got a brief reprieve after a questionable fall to the canvas was ruled a slip. But Segura went right back to work and emphatically took the round as Calderon went back to his corner looking like a fighter ready to quit. The fans in Puerto Rico thundered their support for the Iron Boy, chanting “Ivan! Ivan!” to re-energize their man who was clearly in trouble.

In rounds six and seven, the Calderon successfully avoided prolonged periods on the ropes and fought on even terms by countering and keep the action in ring center. The problem was Segura refused to concede, and continued to punctuate his constant pressure with debilitating body punching. While the rounds could arguably go to Calderon, the effects of Segura’s work downstairs made Calderon’s movement more labored and showed every observer who would have the momentum if the fight went late.

Round eight would prove to be the end for Ivan Calderon. Unable to use the darting movement he had earlier, Segura cornered Calderon and punished the Puerto Rican star with more thudding shots to the body. Calderon wilted and took a knee to stop the barrage. With both eyes swelling and a cut, Calderon took the 10 count and relinquished his WBO title.

The win makes Giovanni Segura the unified holder of the WBO and WBA straps at super flyweight. Before the fight Segura said he would chase his “prey,” and expressed satisfaction in executing his game plan.

“I know how it feels to wait for that super fight from your champion and that’s what I was thinking about,” he stated.

Calderon wasn’t impressed with Segura physical talent, but noted his conqueror succeeded tonight because he had the will to be champion.

“He doesn’t have style or good movement but he showed he’s a great champion,” he said.

Ivan Calderon also verified he does not plan to retire. He will rest for the remainder of 2010 before evaluating comeback plans next year.

Corley Gives Maidana All He Can Handle

Many expected Corley to be blasted out early by the hard-punching Argentinian, but grizzled contender showed no fear initiating exchanges with his younger foe. Despite being briefly buzzed in the second, Corley’s chin held up well and he continued to force Maidana into competitive firefights throughout the fight.

Maidana scored a knockdown in the eighth, but was buzzed himself when he recklessly rushed in to the end the bout. Corley refused to the yield in the championship rounds, and was actually the fresher fighter down the stretch. But Maidana’s knockdown and the benefit of fighting in his home country gave him wider scorecards than the fight actually warranted (117-110 twice, 115-112).

The lackluster win hurts Maidana’s profile, but still the clears the path for him to face rival Amir Khan for the WBA junior welterweight title on December 11.