Skip to content
The fight will be for the vacant WBC 154 pound championship. Margarito has previously fought at the weight. Pacquiao will be competing there for the first time and seeking to win a title in his 8th weight class. 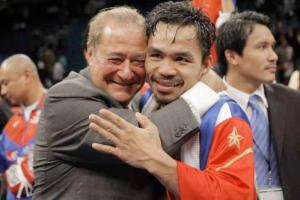 Top Rank CEO Bob Arum has confirmed that Manny Pacquiao and Antonio Margarito will meet in November at junior middleweight.

Margarito is not licensed in the United States following his 2009 suspension for attempting to use illegal hand wraps. Earlier this month, Las Vegas declined to re-license Margarito, advising that he should apply in California where he was suspended.

Arum will reapply in Las Vegas now that he can present a lucrative matchup. If Margarito is again turned away, the veteran promoter advised he will host the bout in Monterrey, Mexico.

A Cotto-Pacquiao rematch had also been suggested in recent months by Arum. But considering how dominant Pacquiao was in the first fight, Arum decided a Margarito bout is more intriguing to the public.

“Cotto was beaten and even with [Hall of Fame trainer] Emanuel Steward now with him, I don’t think people believe that it’s enough to make a difference and I’m not sure they would buy it as competitive,” Arum told Yahoo Sports. “But putting aside the controversy about the wraps, the one thing you know for sure with a Margarito fight is that it will be a hell of a fight for however long it lasts…Margarito knows only one way to fight and that’s coming forward. They’re going to get in there and fight. That’s what people want to see”

The fight will be for the vacant WBC 154 pound championship. Margarito has previously fought at the weight. Pacquiao will be competing there for the first time and seeking to win a title in his 8th weight class. Pacquiao’s last fight was a March decision victory over Joshua Clottey. Margarito took a unanimous decision over Robert Garcia in May.

Arum’s decision verifies that the fan-anticipated superfight between Floyd Mayweather and Manny Pacquiao will not happen this year. The two camps had been embroiled in another controversy following Mayweather not responding to Arum’s July 16 deadline to sign an alleged negotiated contract. Representatives for Mayweather have since denied that any negotiations took place.

At press time, Arum has not disclosed whether he will attempt to get Margarito re-licensed in California as Las Vegas has instructed.

Pacquiao-Margarito will take place on November 13.

Beats, Boxing and Mayhem will report more details on this breaking story as they become available.

Once again everyone has gotten what they’ve wanted except the fans. Bob Arum gets to keep the promotion exclusively with his house fighters, as we’ve known he’s wanted all along. Mayweather gets to continue his vacation; news today placed him Puerto Rico at a cockfighting event. And Antonio Margarito gets a big payday and title shot he doesn’t deserve.

Just another day in the world of boxing, my friends. I’ll be popping in Hearns-Leonard I and Ali-Frazier I to lift my spirits.