Skip to content
Anthony Joshua exorcised the demons from his disastrous loss. Now, Andy Ruiz must do the same... SAUDI ARABIA — Facing the most pressure to date in his professional career, Anthony Joshua maintained icy composure to frustrate and outbox Andy Ruiz to avenge his first defeat and recapture the unified WBA/WBO/IBF heavyweight titles.

For the last six months, Joshua and Ruiz have been polar opposites in everything from their personal backgrounds to physiques. Last night, their vastly different approaches to the biggest fight of the year hint at their future trajectories. 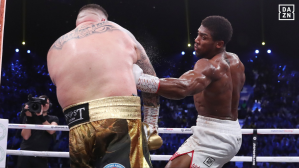 ADJUSTMENTS VS. CONTENTMENT: Instead of getting kudos for going into an immediate rematch with the man decisively KO’d him, the -re-fight talk revolved around Joshua’s supposed fragile mental state. Growing out his hair was viewed as being mentally lost. His words of being certain he would win was scoffed at for being empty platitudes.

Meanwhile, Ruiz’s huge upset gave him a long leash with media and fans, even when he showed up to the weigh-in packing an extra 15 pounds on his already massive frame. Oh, it had to be gamesmanship from the new champ! There’s no way he’d show up undertrained and throw away more potential massive paydays, right? Some even brought Ruiz’s absurd claims of a weighted sombrero or that he had converted a large amount of fat into pure muscle.

The ring is the ultimate truth-revealer and Joshua was the one who seized the moment. The decreased weight allowed him to be quicker on his feet and gave him the stamina to move for 12 rounds. But this wasn’t a track meet — a slashing Joshua right hand opened a leaky cut above Ruiz’s left eye to conclude round one. Joshua’s jab was sharp and stinging, knocking Ruiz’s head around at unnatural angles and giving the new champ second thoughts about rushing in.

You would think Ruiz, the fighter who just tasted his first multi-million dollar payday, would be the one hungry to keep the gravy train going. 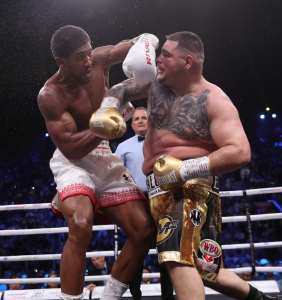 COMPOSURE UNDER PRESSURE: Ruiz extra flab certainly made Joshua’s job easier, but there were still tense moments down the stretch.

In round eight, Joshua began to tire and allowed Ruiz to touch him downstairs with solid hooks. Later, Ruiz landed a perfect counter right hook in an exchange. And the clinches were no longer a refuge for AJ as Ruiz clubbed him with looping rights.

This could easily have been a momentum-changing round. However, Joshua went right back to turning Ruiz with constant movement and popping the jab. Ruiz’s face showed frustration as he now realized Joshua could not be goaded into a slugfest.

FLAWED REDEMPTION?: While scorecards were wide in AJ’s favor (119-109 twice, 118-110), it was not a performance that will immediately catapult him back to the consensus #1 heavyweight. Questions remain about his chin against Wilder and if he has the acumen to outbox a spoiler like Fury or even the division darkhorse in Oleksandr Usyk.

There’s also a vocal minority on social media that’s perturbed Joshua didn’t blast out Ruiz like countrymen Lennox Lewis did Hasim Rahman in their return bout. That’s a misguided take, as Lennox had more than his fair share of cautious stick n’ move bouts (see David Tua), and the Hall of Famer summed it up well on Twitter:

Every fight isn’t going to be a KO. I thought AJ fought a good tactical fight and didn’t fall into trap of trying to mix it up in exchanges. This was a good addition to his experience. He also wisely unpacked his jab for this one. https://t.co/u1wmQZZJfR

I understand that ppl want blood… but, as a fighter, you have to be disciplined enough to wait for the opportunities to open up. Sometimes they don’t come. When that happens you play it safe and stick to game plan. https://t.co/xQo9igxWh3

NOT THE MEXICAN BUSTER DOUGLAS… YET: Andy Ruiz laying an egg on Saturday effectively killed any interest in a trilogy. It was also eye-rolling to hear him immediately cop pleas in his post-fight interview saying he wasn’t prepared and didn’t listen in training.

Yes, it was poetic that Ruiz’s 15-pound weight gain was the exact amount Buster Douglas brought into his ill-fated first title defense against Evander Holyfield. But Douglas also went into a complete downward spiral where he didn’t fight for another six years. Ruiz still has among the fastest hands in the division and if he gets his head on straight, has very marketable and potential action-packed fights he could pursue against Luis Ortiz, Adam Kownacki, Dillian Whyte, Alexander Povetkin or Michael Hunter.

Just like we gave Joshua the opportunity to redeem himself, Ruiz should be extended that same space to right his wrongs. COMPLETE UNIFICATION IS STILL A YEAR (OR LONGER) AWAY: Joshua was diplomatic when asked about future matchups with Wilder and Fury, stating coyly they’ll contact him when they’re ready. We can translate that as “I’m the cash cow and when you guys are ready to accept MY terms, we can make the fights.”

As Eddie Hearn stated, Joshua will have at least two mandatories to occupy his 2020 against Kubrat Pulev and Oleksandr Usyk. Meanwhile, Wilder-Fury II is targeted for February and there is a rematch clause on both sides, ensuring those two big money matchups will fill up the year as well.

Not having an undisputed champ until 2021 isn’t ideal, but compelling matchups will ease the pain. And Anthony Joshua’s performance this weekend ensures he has a good chance to be the last man standing.