15 wins, 15 knockouts. Last night in Philadelphia, Artur Beterbiev added another belt to his light-heavyweight crown and laid claim to being the best 175-pounder in the world by stopping previously undefeated Oleksandr Gvozdyk to unify the WBC/IBF titles.

It was a masterful performance from a fighter that not only showed his previously acknowledged brute strength and finishing prowess but revealed his high-level IQ to gradually outbox and break down a more mobile fighter.

THE END WAS SEEN AT THE BEGINNING: Although this was a very competitive fight that I had even through six, the second round encapsulated why I felt confident picking Beterbiev by late KO.  Early in that stanza, Gvozdyk boxed well behind the jab and had Beterbiev on the end of his right cross and left hooks. However, Beterbiev never showed the appearance of being bothered and began rattling Gvozdyk with right hands to the body and overhand rights upstairs. When Gvozdyk attempted to hold, Beterbiev mauled him and clubbed his taller but physically weaker foe with short, clubbing hooks.

This told us that while both were heavy-headed, Beterbiev was more durable AND stronger, allowing him to erase 1-2 minutes of good Gvozdyk work with 3-4 heavy shots to take the round. And although Gvozdyk is a capable boxer, he isn’t the “master boxer” some have portrayed nor elusive enough to avoid Beterbiev’s power to win seven clear rounds or score a KO.

THE APEX PREDATOR CLOSES IN: Ever watch a Komodo Dragon stalk an injured prey then slowly devour it? That is how this fight looked from the seventh round on.

After being hurt to the body in the fifth, Gvozdyk had a strong bounce-back sixth where he briefly stunned Beterbiev with a 1-2 and then cemented the round with a head-snapping straight right. That would be his last round on my card. 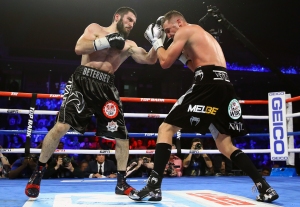 Beterbiev seemed to suddenly remember how effective his jab could be in disrupting Gvozdyk’s timing. It opened up the body punching in the seventh and eighth, leading to a dominant ninth for Beterbiev where he battered Gvozdyk. “The Nail” was hurt in the opening seconds with a left jab to the body. Later, Beterbiev swarmed up with right hands downstairs and then incorporated left hooks that stopped Gvozdyk from finding angles to retreat.

Now physically spent and being walked down, Gvozdyk had no energy to hold nor prevent Beterbiev from mauling him with body shots.

The tenth was all Beterbiev, who brought Gvozdyk to his knees three times before the ref called the merciful stoppage.

ON THE PATH TO UNDISPUTED: Most won’t argue if last night cemented to you that Beterbiev is the world’s best light-heavyweight. But there are still belts and other champions out there. WBO title-holder Sergey Kovalev faces Canelo Alvarez on November 2, with most favoring the latter because of Kovalev’s age. Should Kovalev win, he’s already on record as stating he’d like to face Beterbiev. If Canelo wins, in all likelihood he vacates and Beterbiev could possibly face the Kovalev or the next highest-rated contender (right now Gilberto “Zurdo” Ramirez) sometime next year.

The quicker fight to be made would be against WBA title-holder Dmitry Bivol, who just defended his belt with an easy decision win over Lenin Castillo last week. Although Bivol fights on DAZN, Eddie Hearn and that company have worked with Top Rank/ESPN before to make big fights, most notably the recent Maurice Hooker-Jose Ramirez unification. For his part, Beterbiev appears focused on getting all the titles and being the first undisputed champ since Oleksandr Usyk’s cruiserweight run last year.

“It doesn’t matter [who I fight next],” said the new unified champ. “Anyone. I’m focused on title, not on name.”

When it comes to Artur Beterbiev, the politics are low and the fists are heavy. Just how boxing fans like it.