Andy Ruiz gets the call for Joshua's U.S. debut. 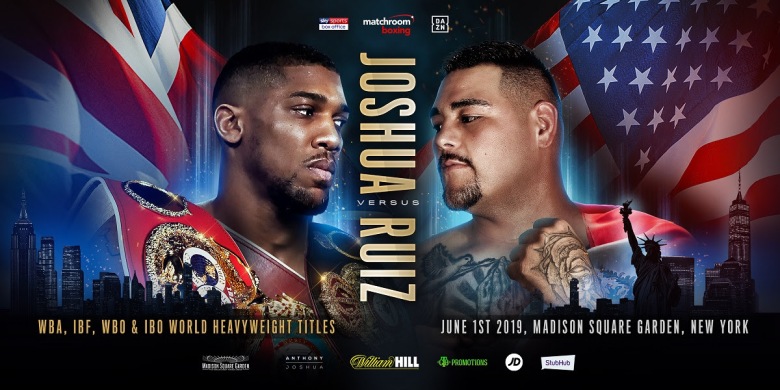 Ruiz is coming off a fifth-round corner retirement of Alexander Dimitrenko on April 20. The Joshua fight will be Ruiz’s second title opportunity since losing a close majority decision to then WBO title-holder Joseph Parker in December 2016. Since that defeat, Ruiz has reeled off three straight victories.

“I think being so tall he fights like a big robot. I think with my style, my speed, my movement, I don’t think he’s fought anybody like me. It’s going to be a whole different ball game. All the guys that he’s fought, they usually run around from him. I don’t think he’s good going back. I’m going to bring the pressure, the speed, and the combinations to him.”

“Ruiz is a different kind of challenge but one I embrace,” said Joshua. “We have worked in the boxing gym week on week and whoever is put in front of me at Madison Square Garden on June 1 will be dispatched in style. The rent will be collected.”

Joshua vs. Ruiz will air exclusively on DAZN.

Not bad for a last minute opponent. For all the talk about Luis Ortiz stepping in, there was too much bluffing going on between his various handlers. They ended up shooting themselves in the foot and missing out a golden opportunity they may never come again for a 40-year-old fighter. Not to mention, it would be a big risk to give Ortiz the call knowing his own drug history of two failed tests.

Also promising is Ruiz being a PBC fighter, meaning we can only hope the rapport between the companies stays good enough that we can finally get the AJ-Wilder showdown sometime in 2020.

As for how this fight goes, I see it similar to the Povetkin fight in some ways — Ruiz does good work when he does get inside but those moments are few due to Joshua’s superior jab, height and reach.

I see a late stoppage for Joshua somewhere between the 10th and 12th rounds.