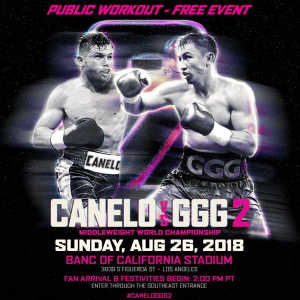 With these events, the actual workouts are very lax. The key point for observers is the fighters’ physical condition and both men looked on point. GGG had no noticeable flab around the midsection. The jab, whch carried him in the first bout, was sharp and thudding. Contrary to popular belief, that punch remains a key weapon if GGG hopes to get the W this time.

On Canelo’s end, much has been made of his slimmed down physique. Speculation aside, the reduced bulk should do wonders for his speed. This can possibly help with his countering and being able to retain stamina in the late rounds where GGG normally starts to surge. From the exercises, it’s possible that Canelo will be doing more work inside the pocket where his handspeed can allow him to get off first with flashy combos and skirt out of danger.