Kevin "Kimbo Slice" Ferguson, who rose to fame as bareknuckle fighter and influential MMA star, has died Monday night from a heart attack... 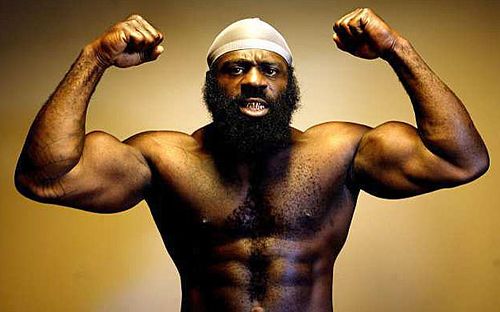 Kevin “Kimbo Slice” Ferguson, who rose to fame as bareknuckle fighter and influential MMA star, has died Monday night from a heart attack.

A spokesman for the Coral Springs Police Department stated the Bellator fighter was admitted on earlier today to Northwest Medical Center in Margate, Florida. He had been scheduled to rematch James Thompson on July 16 at Bellator 158 in London. Company president Scott Coker released the following statement on Slice’s passing:

We are all shocked and saddened by the devastating and untimely loss of Kimbo Slice, a beloved member of the Bellator family.

One of the most popular MMA fighters ever, Kimbo was a charismatic, larger-than-life personality that transcended the sport.

Outside of the cage he was a friendly, gentle giant and a devoted family man. His loss leaves us all with extremely heavy hearts, and our thoughts and prayers are with the entire Ferguson family and all of Kimbo’s friends, fans, and teammates.

After gaining a devoted following for his street fights in Miami, Slice became a pro MMA fighter in 2007. Despite never being a dominant in-ring force, Slice was a big ratings attraction and headlined the first MMA card on network television for the now defunct EliteXC. Later, he fought two fights for the UFC in 2009.

Slice made a brief foray into boxing where he compiled a 7-0 record before returning to MMA with an exclusive Bellator contract in 2015. His last fight, originally an TKO win over Dhafir “Dada5000” Harris at Bellator 148, was overturned to a no contest after Slice tested positive for an anabolic steroid and elevated testosterone levels.