Skip to content
Canelo gets by Austin Trout and unifies the WBA and WBC light middleweight titles... 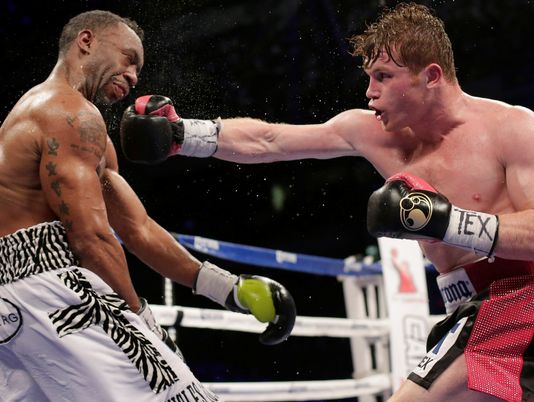 SAN ANTONIO, Texas — Golden Boy did everything to persuade Saul “Canelo” Alvarez to avoid taking on Austin Trout. He wasn’t marketable. You’ll mess up potential bigger fights. You won’t look good even if you win, But Canelo proved his championship worth in not only taking on the best challenger in his division, but showing new facets to his game in defense and counter-punching to take a unanimous decision and unify the WBA and WBC light middleweight titles.

Once again, we had scorecards that didn’t reflect the high competitiveness of this fight. However, the verdict was one that most sane fans won’t have much of a problem with.

ADJUSTMENTS, CLOSE ROUNDS AND PREFERENCE: The fight had lots of ebbs and flows with each man making a strong case for their strategies in every round. Starting off, Trout controlled the pace behind his southpaw right jab. Canelo began timing it and shooting powerful right hands down the middle. Trout’s chin held up and he made sure to keep enough distance to make Canelo have to lunge with follow-up hooks. Trout also kept himself off the ropes which nullified Canelo’s offense to one punch at a time. Nonetheless, these singular Canelo punches were very powerful and often times the clearest, most effective punches of the round. Over the first six rounds, I thought Trout’s activity and ring generalship was effective enough to have him ahead 4-2.

Canelo then promptly had his best round in the seventh when he drilled Trout with a straight right for the bout’s only knockdown. It was a delayed reaction with Trout taking the blow, trying to reset and having his legs turn to jelly. Despite eating a jarring right uppercut later, Trout controlled the rest of the round and was actually coming forward as the stanza closed. A pure heart display.

Trout did good work in rounds 8-9 by focusing on the body and mixing in his own uppercuts. Instead of holding inside or moving away, he picked his spots with hooks and took advantage of Canelo’s tendency to fight in spots.

Rounds 10-11 were very competitive with Canelo holding the edge with his powerful counter shots. Trout got caught several times with thudding counter right uppercuts. In addition, Canelo showed good head movement in slipping Trout’s jab and disrupting the rest of his offense. Even when Canelo went on the backfoot, he was still able at times to counter Trout’s jab. On the other hand, Trout seemed confused on how to adjust to land his own power shots.

Canelo backed off in the 12th, allowing Trout to win it and making the fight 114-114 on my card. I wouldn’t be mad with either guy winning and usually the one moving forward and landing the harder punches will get the benefit of the doubt. To his credit, Trout had no complaints and said the better man tonight won.

OPEN SCORING: This has been tried a bunch of times over the last 30 years and it never works. The scores were told to each corner twice in the fight and Canelo took a cautious approach in the 12th because he knew he had it won. Had that info been withheld, we might have been treated to an awesome finale to what was an excellent fight. I honestly don’t think there’s any true benefit to this as it takes too much drama out of the sport. Back in 1977, open scoring was tried in Muhammad Ali’s title defense against Earnie Shavers. The scores were only told to the television audiences so the fighters wouldn’t be influenced to coast if they had a lead. Being ever the strategists, Ali’s camp got around this by having someone running to the back to watch the TV and get the scores after every round.

WHAT’S NEXT?: Canelo has wanted Floyd Mayweather for the past year and he reiterated that point in his post-fight interview. Although Canelo showed he’s still prone to being outboxed, the jury is still out on if Mayweather has the legs left to do it (we’ll see in a few weeks against Robert Guerrero). Mayweather-Canelo would be a huge event fight and there’s no other option that makes sense for both. If Mayweather pulls some BS at the negotiation table and opts to fight someone like Devon Alexander, he’ll rightly get a huge backlash from fans and media.

As for Trout, I hope Golden Boy sees his worth and we get to see him return on Canelo’s September card. As for an opponent, the winner of Erislandy Lara vs. Alfredo Angulo is a good option. And if James Kirkland ever gets himself together, that’d be a good fight although I doubt Kirkland would face someone like Trout in his first fight back.

FIGUEROA DESTROYS COTTO: Miguel Cotto was in the house and unfortunately had to watch his cousin, lightweight Abner Cotto, get annihilated in just one round by the whirlwind that is Omar Figueroa. This kid has that constant pressure of Abner Mares and Juan Diaz, but a good bit of power to back it up. He connected with a hook to the body that he followed to the head that sucked the fight out of Cotto. The punches dropped Cotto, and when he rose he found himself trapped in a corner and quickly put back on the canvas for good with a stabbing left to the body. With Adrien Broner gone from the division, lightweight is wide open for Figueroa to make a name for himself..