Skip to content
Baghead and The God Inside My Ear highlight day 1.

And we’re off! The Buried Alive Film Festival began its official first day on Thursday night, delivering a psychedelic, genre-bending feature in The God Inside My Ear, and a bevy of short films under the theme “For the love of the undertaker.”

Here are the macabre highlights.

SHORTS PROGRAM #1: FOR THE LOVE OF THE UNDERTAKER

No one wants to be embarrassed in front of a crowd. This is where we find Josh, an aspiring musician who’s struggling to find his groove during a drum machine competition. He’s in danger of getting booed off the stage when Alexis, a sound engineer, begins to guide him from the audience. The surface result in a dope beat, but then it triggers a hidden death machine sequence straight out of the Saw films.

We now see that innocent and helpful Alexis is actually a conductor of death. The sounds of the victim suffering a gruesome death and the screams of the horrified crowd (and Josh) becomes her new soundtrack as she blissfully dances away from the carnage.

There’s only a single kill, but the special effects are top notch and a unique premise makes the horror element a nice surprise. This one takes the werewolf theme and turns it upside down. Our protagonist is a dog that gets bit by an unseen creature. The bite doesn’t turn our hero rabid or violent, but into a full-grown, naked human!

The human version still has a dog’s mind and is content to run around naked, eat dog treats and lounge on the bed. His owner, a single woman looking for a good lay, doesn’t even ask questions about how a strange man has ended up in her house. She gets the proverbial doggy style treatment from the human version of her animal, who also bites her during climax. This gives us our second body reversal where the human owner now turns into a dog during the full moon.

The horror is light in this one. However, Francine Torres and Michael Curran are hilarious in their roles and make this worth a watch for the creative plot.

What Comes from a Swamp (Tyler Macri, USA)

A kid finds a humanoid creature in the swamp, which he keeps hidden in the house and cares for. The kid is now a teenager and struggling to continue caring for the creature, which is also full-grown with a voracious appetite for meat.

This cinematography is excellent in conveying an environment full of dread and tension. The creature is mostly unseen except for its hands and the banging it makes when hungry.

There’s a subplot here with a butcher plant that’s farming these creatures for their meat, causing the fateful confrontation between the young man and the company’s underlings.

Count this one as having feature potential.

This was our first animated film and a welcomed change of pace. The story focused on two siblings: a teenaged older sister (Layla) and a younger brother. The “pink elephant” is the older sister’s compulsive disorder, which results in the desire to commit violence whenever she sees sharp objects. The younger brother knows this and likes to goad her, likely not understanding how seriousness of her problem.

As viewers, we know because we can see the violent images. These images switch to live-action and we see quick flashes of the girl imagining herself butchering the family cat and slicing her brother’s fingers with a pizza cutter.

In the climax, the girl is locked in the toolshed by her brother. The cat also happens to be in the shed and the girl is faced with overcoming her homicidal impulses.

I really enjoyed this one. It was a reminder you don’t have to be a monster to have monstrous thoughts. We’re a jaded bunch, so I’m sure most would’ve preferred a darker ending (Layla is able to master her compulsion… for now), but the conclusion fits with the strong will of resistance Layla displays throughout the film. 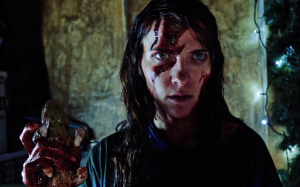 The male ego and mansplaining isn’t just an annoyance for this woman – it becomes a fight for survival in this satire from Finland. A couple’s car breaks down and they’re saved by a clan of male chauvinists who belittle the woman at every turn. From not being married and having kids to not believing she’s well-versed in horror movies, her identity is continuously insulted until the woman snaps and begins a “shotgun purge.”

In the process, the woman is able to liberate the other woman on the compound, who’s pregnant and has survived this long by “smiling” and “nodding” at their long-winded spiels about a woman’s place. These men, as expected, are bubbling idiots who go into religious-like trances when giving their hot takes on gender and feminism.

The final kill stuck with me the most, as the woman breaks up with her boyfriend for going into a “not all men” rant after her killing spree. She poignantly says “I can’t leave him behind” before running him over with a truck.

An overworked man comes home on his birthday to find a card from his mother. She includes a childhood picture, and that sets in motion an attack from a Ring-style ghoul. The ghost has the appearance of the man from his childhood years. However, I didn’t make the connection that the haunting was due to the child being disappointed by what the adult version of himself has become (Sheedy fleshed this out in the post-film Q&A).

I feel like an additional minute of exposition might’ve helped there, but it’s still an effective piece in six minutes.

Real recognize real. Or in this case, it takes a killer to appreciate a killer. That is the main takeaway from this film where two serial killer meet on a deserted road.

One is an older man who gets off on killing hitchhikers. This time, he picks up a mysterious young man who’s also a killer and prefers to work in a mask. The two are sizing each other up, believing the other is unaware of his true intention to notch another victim.

We get a fun standoff when they both realize their kindred psychopaths, and from there the two function like old pals swapping war stories.

In the post-film Q&A, Ellis revealed this is a modified version of a feature idea where the young killer takes out the older one and then functions as the main antagonist.

That’s the tagline for this story about a man who gets bit by a mosquito and can’t seem to stop scratching. The wound gets worse by the second and to the point where the man is literally tearing into his arm.

The special effects with the blood and gore is really good, but the premise didn’t hit me at all. If not for the tagline, the Trump angle wouldn’t enter your brain. 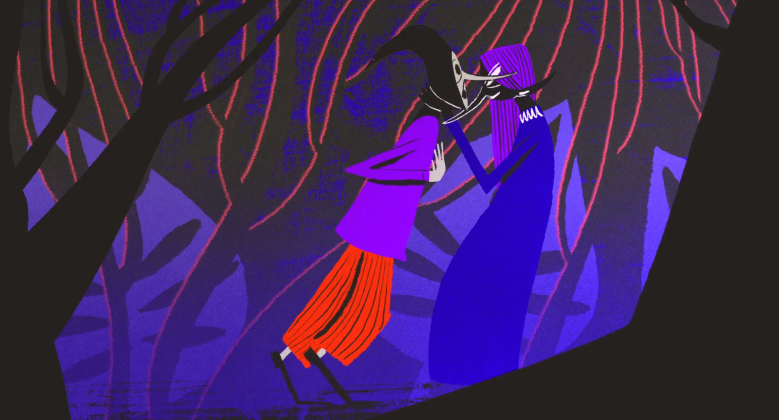 Should You Meet a Lady In a Darkened Wood (Daniel Stankler, UK)

We’re back in the animation world. Presented as a folktale, we have an overconfident taxidermist whose life’s work is his collection. He decides the only thing missing in his life is a woman. Per his calculations, the “lady in the darkened woods” fits his qualifications perfectly.

But like most have discovered via online dating, you can’t sum up a person’s worth and capability from a profile. And in this case, the lady in question has witch-like powers resulting in a dire end for our taxidermist.

Be careful what you wish for.

Clocking in at 20 minutes, this was our longest film of the program. It’s centered on Cole, a fry-cook at a burger joint who gets stuck covering the overnight shift, causing him to miss his anniversary dinner with his girlfriend. Outside, Jim and his business partner Billy get carjacked by a masked gunman. The gunman attempts to hide out in the burger joint, leading to a comical showdown between all invovled.

I couldn’t help but think this could’ve been really memorable if they went for the serious approach. Nonetheless, Cole is the charming underdog you can’t help but root for, especially when pitted against the slimy Jim, played well by John Nicholas and who deserves credit for carrying much of the film with his animated performance.

This is another one where the horror label feels like a stretch (more like a comic caper), but I enjoyed the ride.

I had the pleasure of seeing this at the Atlanta Horror Film Festival last month and it was even better on second viewing.

Baghead follows a witch with the power to channel deceased people into her body. All she needs is a picture and a personal item. Most people would use this to catch up lost family members on life and seek comfort. But Kevin, who was wronged by his fiancé before her fatal car crash, is looking for revenge.

Everything from the creepy basement to the witch’s design and the body channeling effects are fantastic. Julian Seagar, who plays the “gatekeeper” of the witch, was on hand to give some exciting news about the project having a ready-made mythology they plan to expand into a full universe (more on that later this week).

Track this down and see it ASAP.

[Review] The God Inside My Ear

“You either loved this film or hated it, there’s no in between!”

These were the words of William Tokarsky, who voiced the role of the toy gnome “Mr. Stuffy Bottoms” in Joe Badon’s surreal head trip The God Inside My Ear.

This amalgamation of comedy, horror and drama centers on Elizia, a shy woman who has a mental and emotional breakdown after being dumped by her boyfriend. Suddenly, we don’t know what’s real anymore as Elizia begins hearing voices, getting strange voice calls and experiencing cryptic visions.

Greggs had a heavy load in navigating such a wide range of emotions. One minute, Elizia is crying tears of joy because the “beauty” she finds in a horror movie sequence. The next she’s screaming her head off in fear or incredulous when the toy gnome starts talking to her (and her neighbor’s dog too, for that matter).

The narrative is loose and presented in fragmented chapters as Elizia tries all mediums (medical, psychic, psychiatrist, drugs, and friends) to cure her illness. We hear her repeatedly state she’s “broken” and can’t be fixed after the devastating loss of her boyfriend.

Ultimately, your view of this film will rest with its conclusion, where it’s implied that Elizia is the reincarnation of a nun that died several decades earlier. Her mental issues then have to be viewed as her own spiritual and psychological process of accepting death, ala Jacob’s Ladder. Her ex-boyfriend’s Jesus-like appearance adds some credence as to why the breakup was so devastating to her psyche.

For me, I found the dismissal and indifference of Elizia’s friends as the most striking aspect of this film. We continually hear them say “she’ll snap out of it” and it’s just “the breakup process.” Even in the hospital, the nurse injects her own views into the proceedings and not only does a hypnotism session, but directs Elizia to the quack psychiatrist (Satan, possibly?) who later tries to kidnap her. The constant dead ends and misdirection says a lot to how those suffering from mental illness aren’t protected and disregarded in modern society.

Shot in 13 days on a shoestring budget of $8000, The God Inside My Ear is the type of film that could very well end up being a cult favorite in several years. If you like your horror experimental, give this one a shot.