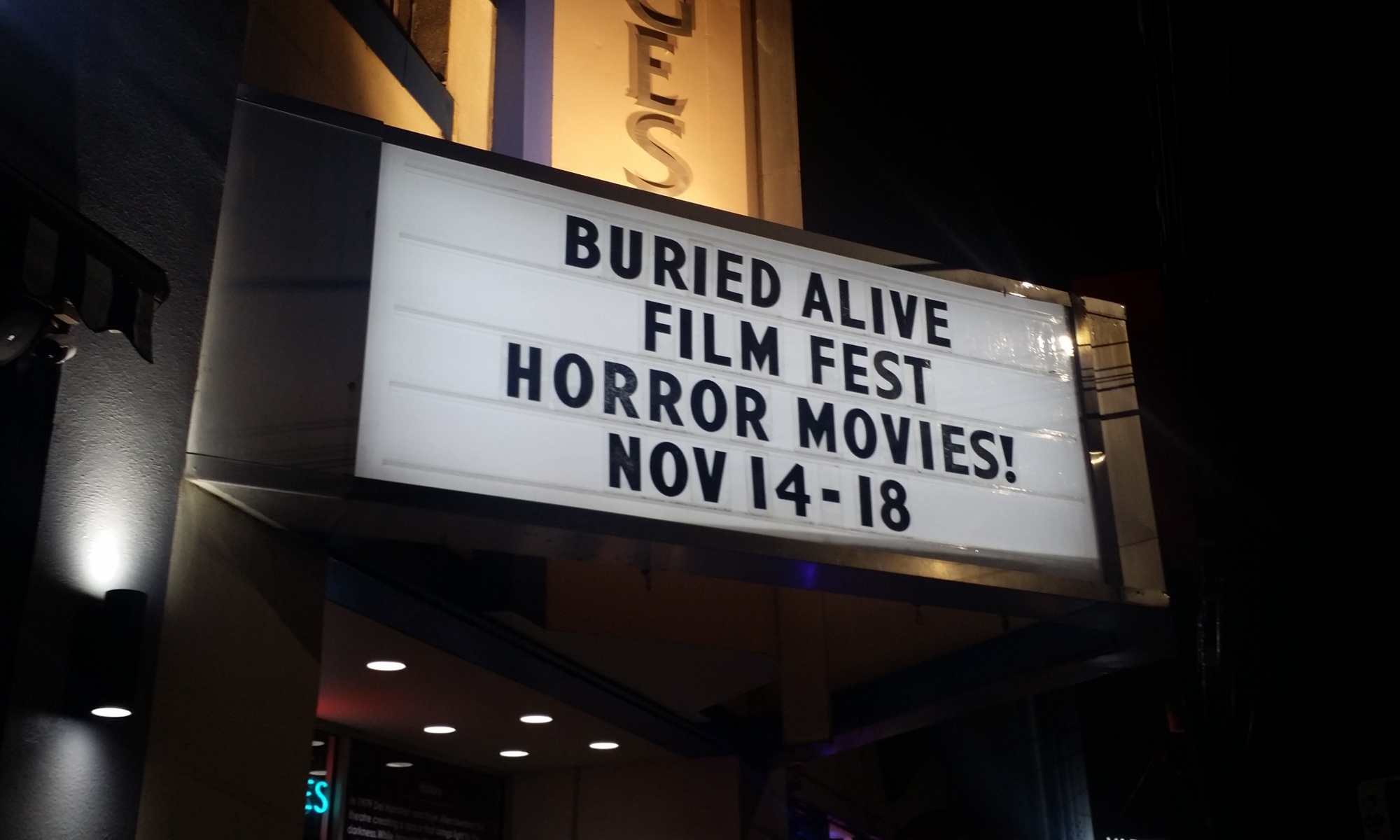 The Buried Alive Film Festival begun their week of horror with "Sinema Challenge."

The festivities for the 2018 Buried Alive Film Festival began Wednesday with a standing room only crowd for the annual Sinema Challenge.

The contest gave these ambitious filmmakers 13 days to create a film based on lottery drawings that determined the project’s theme and genre. The end result wias a smorgasbord of horror delights that ranged from adolescent slashers and vampire slaying DJs to cannibal lovers and a psychotic redneck DIY TV show.

The time crunch resulted in two submissions being disqualified for not making the 13-day cutoff. However, the good folks behind the Buried Alive event were gracious enough to still let the films be viewed. Killer Apps (Maya Kavchak, Trent Kinnucan) told the story of a young woman whose online dating attempts end with her suitors getting gruesomely killed in “accidental” ways. Her two friends don’t seem that concerned with the rising body count and even help dispose of the bodies. The plot plays out as ridiculous is it sounds and the crowd thoroughly enjoyed the absurdity. The second film, Coming of Rage (Tim McGahren), was slightly more serious in exploring the mood swings of a young girl hitting that rebellious stage. Still, the mood remained light as the climax of has our young protagonist becoming a slasher and dismembering and killing all her imaginary friends, represented by her dolls and stuffed animals.

From the main films, the big winner was Matt McGahren’s One Piece. Based on “true events,” it tells the tale of a bullied kid on Halloween night being goaded into entering the house where a maniac killed his family. There’s a candy bowl with explicit instructions to take “one piece.” Of course, no kid can just have one piece of candy, triggering an ax murderer that hunts down the kids one by one.

Kids getting axed would usually be a horrific subject, but McGahren subverts this by giving us an old man killer who not only can run faster than kids 50+ years his junior, but he also has a propensity to yell out “It said take one piece, motherfucker!!! (insert repeated cackling).” That was all it took to get the audience rooting for him. One Piece would take home two honors last night for Runner’s Up pick from the official judges and the Audience Award from the crowd.

My favorite of the group was Walt Guthrie’s Mama. In this one, we have a young black girl who’s afraid to go to sleep. Her mother is patient, thinking it’s simply jitters from letting her child see a scary movie earlier that night. But as the girl keeps talking, her details are too exact as she explains a killer clown followed them home and is in hiding in the closet. We get some tense moments as the mother cradles her daughter and tried to make a run for the door. The clown, clad in only briefs and makeup, then bursts from the closet and tackles them.

The last minutes gives us a bloody struggle between mother and clown while the daughter wails in the corner. The fighting is bloody and fierce, ending with the mother’s protection instincts taking over and stabbing the intruder dozens of times. It was one of those satisfying kills that elicited sports-like cheers from the audience. And let’s face it – black people making it to the end of a horror film is always a reason to celebrate.

We got a cool spin on the vampire slayer image with Robert Alvarez’s DJ Slay. The hunter cover is a lowkey but pretty club DJ who’s struggling to make ends meet. When she gets stiffed by a promoter, the vampire she’s hunting makes his presence known, offering to retrieve her money and give her better paying jobs. She pays along, acting as if his charms are irresistible. This sets the stage for his later ruin in her house via a stake to the heart.

Eric Kays’ Ouija Bored was the judges’ pick for best overall film. Four friends with too much time on their hands kidnap a woman to perform a demon-conjuring seance. Problem is, none of them have ever done it before and are clueless about a starting point. Enter the actual victim, who wakes up and conveniently has a Ouija board tattooed on her stomach. She matter of factly goes through the demon ritual process, even stabbing herself as needed. The inside jokes and snarky dialogue went over well with the crowd and the human Ouija board was a creative take on conjuring tropes. In fact, you could look deeper and say the film itself is giving commentary on how tired those tropes truly are.

Honorable mention to the remaining films:

To conclude the night, every filmmaker got on stage to discuss their work and take a well-deserved bow. The event was a great showcase of the creative minds we have at all levels of horror.

The official kickoff happens on Thursday (November 15). The festival runs through Sunday night and you can buy tickets and view the lineup at http://buriedalivefilmfest.com/schedule/.

BeatsBoxingMayhem will be providing daily recaps through the duration of the festival.