After six weeks of speculation, the Purge series has finally given us a backstory on the masked vigilante Joe.

Turns out Joe wasn’t always the brooding type that takes shotguns and baseball bats to his victims. Once upon a time he was a diligent factory worker, stuck between upper management and being a working stiff. He worked alongside his Dad and believed in the “social contract” that hard work eventually pays off.

Every time there was a disapproval flare-up among the workers, upper management would rely on Joe to quell the dissenters with pep talks. His father warned him not to trust management, but Joe (and everyone else) received the devastating wake-up call when he arrived at work to find the doors padlocked.

Not only had their jobs been eliminated, the insult was exacerbated by an upper management representative giving them an insincere apology before leaving them with no severance and no work options.

After this, Joe effectively snapped. Playing by the rules had lead his life nowhere. He was angry and needed an outlet. Enter the droning “self-help” tapes he plays while prowling the night for Purgers. The narrator preaches on the “healing powers of violence” and Joe indulges with religious fervor. It’s not pretty, but at least you can say he’s retained a semblance of morality in protecting the defenseless on Purge Night.

“We both kill because the government says it’s OK.” – Henry

At least Henry provided us with a profound quote before he left this world. Like most villains, he just had to pontificate on his evil plans for Miguel and Penelope instead of just killing them. Before he could take out Miguel’s eye, the Marine got loose and satisfyingly strangled him to death. Satisfying for everyone except Penelope – she’s sick of the killing no matter who’s doing it. Until Penny can reconcile her feelings of abandonment, she and Miguel will remain at odds.

Against her best judgment, Jane makes it to David’s house in hopes of saving him from her assassination contract. Turns out her gut instinct was right. Not only had David brutally killed the assassin Bracka, he had his own Purge secret – he hosts a party where fellow powerful men get to sexually assault women.

The social commentary was heavy on this one. In his mind, David isn’t a rapist. He makes a point to state the women, while restrained, don’t have their clothes removed and are “free to go” afterward.

This shows the complete lack of respect he has for the female gender. They are nothing more than “toys” to be played with and discarded when his interest wanes. He gets to move on to other matters while the women he and his ilk assaulted have to carry mental trauma the rest of their lives.

It looks dire for Jane, but keep in mind she does have the number to the Matron Saints. That crew would love nothing more than to bust up a high-level sex trafficking ring. Let’s hope a “PIG” branding is in David’s future.

Rick and Jenna had the biggest emotional arc of the episode. They make it safely back home, but Jenna can’t forgive Rick’s enthusiasm to join the NFAA. She makes it clear she will leave him if he doesn’t let his ambition go. 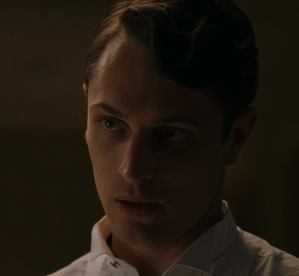 On Rick’s end, we find out his desire for social mobility is rooted in an upbringing of poverty. He doesn’t want his child to experience the same and is taking an “ends justify the means” approach. The thing about Rick is his duplicitous nature in doing business makes it difficult to discern when he’s being genuine. We don’t know yet whether his pleas for forgiveness are real or further manipulation. Take note of the how the director emphasizes this by shadowing half his face during these moments.

With Jenna, she can never truly love Rick while Lila is still an option. This is made clear when she sneaks a phone call to Lila’s cell and a stranger answers, telling her bluntly that Lila’s dead. Jenna immediately clutches her pregnant stomach, symbolizing that she acutely felt the loss of the dream family life Lila promised her.

That heartache is short-lived when a bloodied Lila ends the episode by showing up at their door and frantically begging for help.

The title of this episode is “The Forgotten” and we see that to varying degrees in each character. Joe feels society has forgotten men like him, eliminating their lifelong trades and leaving them no recourse outside of violence to survive. The women like Jane who endure sexual assault by powerful men are ignored by society. Miguel and Penny have forgotten to the importance of relying and trusting each other. And finally, Rick and Jenna’s love has been forgotten in the face of the power wielded by the NFAA.