When confronted by the greatest challenge of his career, he selected flight over fight...

LAS VEGAS — Be careful what you wish for. For over a year, knockout artist Nicholas “The Axeman” Walters has pushed for a showdown with Top Rank wunderkind Vasyl Lomachenko. Money issues, specifically Walters not liking his sub $1 million purse, resulted in the fight not coming off in 2015. Last night, Walters entered the ring with a satisfactory purse ($500,000), but left with his reputation in tatters and no prospective paydays for the immediate future.

When two top-level fighters face off, the conventional wisdom is that it results in a high-level, and hopefully fan-friendly, contest where each man has to adjust strategies and dig deep for the win. From the ring walk, we saw Lomachenko confident in his abilities to do that while Walters looked doubtful of his standing.

It took Lomachenko roughly two minutes to figure out Walters. The feints preceded southpaw lefts and right hook combinations. By the second, Walters’ jab disappeared following a few counter left hands. His normally vicious body shots had their impact blunted from Lomachenko’s footwork and upper body movement. Four round saw Lomachenko incorporate inside work to his dominance as he bullied Walters and forced the Jamaican slugger to give ground. 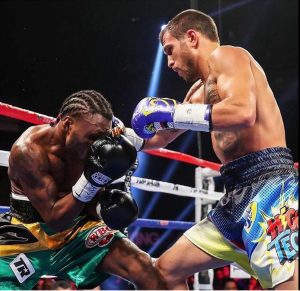 It was fitting that round seven was the end. In those three minutes, you began to wonder how much longer Walters could survive. The Axeman’s legs buckled from guard-splitting straight lefts. When he retreated, Lomchenko pounced with 3-4 combinations. The competition has ended, but the humiliation was just starting. Walters decided there was one thing he could do about it.

Against the advice of his corner, Walters got off his stool to adamantly tell referee Tony Weeks that he wanted no more. Walters would blame his performance on the 11-month layoff, specifically calling out HBO for not giving him regular bouts.

It would be dishonest to say an 11-month layoff didn’t play a role in Walters’ performance. But boxing, more than any other sport, truly embodies the adage of “It’s not if you win or lose, it’s how you play the game.” There are many cases where a loser’s performance is more celebrated than the winner (see Bradley-Provodnikov, Lewis-Klitschko, and the original Rocky movie).

When confronted by the greatest challenge of his career, Walters selected flight over fight.

Nicholas Walters’ defeat to Lomachenko won’t be looked at in the same light. When confronted by the greatest challenge of his career, Walters selected flight over fight. He chose complacency and displaying the behavior of a mediocre fighter over the potential greatness some saw in him after his destructive 2014 wins over Vic Darchinyan and Nonito Donaire.

Nicholas Walters will turn 31 in January. Last night was his first defeat. I say this as reminder that the story of his career is not over. If there’s one thing boxing loves over a great fight, it’s a great comeback story. Vitali Klitschko redefined his career after quitting against Chris Byrd, as did Roberto Duran in the years following the infamous “No Mas” fight against Sugar Ray Leonard. Time will show if Walters is in that same class.

As it was on Saturday night, Nicholas Walters’ destiny remains in his hands.