I CAUGHT HIM WITH MY PUNCH, I THOUGHT I WAS SAFE. I WAS WRONG. GOLOVKIN HIT ME BACK AND IT WAS OVER. — DANIEL GEALE 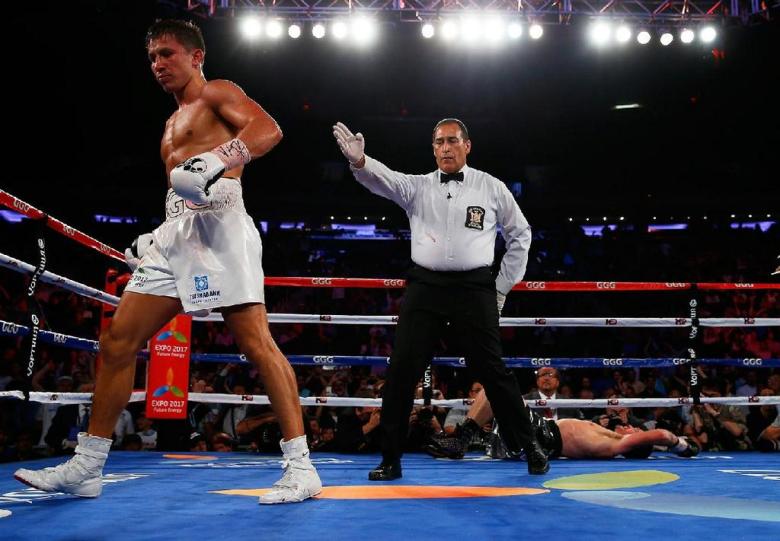 NEW YORK CITY, NY — Gennady Golovkin’s trail of destruction through the middleweight division continued last night at Madison Square Garden with GGG scoring a one-punch knockout over former titlist Daniel Geale. What was supposed to be a tough challenge that took Golovkin into deep waters turned into another exhibition of his punching accuracy, frightening power and underrated footwork. Could a certain future Hall of Fame Puerto Rican be the next potential “good boy?”

HOW GGG RAN THROUGH GEALE: In analyzing this fight, I thought Geale’s hard jab would be a good weapon that kept Golovkin controlled in the early rounds. Instead it was GGG winning the jab battle and keeping Geale backpedaling and out of rhythm. Geale managed to land a few rights in the opening stanza, but Golovkin crashed home his own overhand right that was the most telling shot of the round. In what turned out to be a future omen, Geale found himself on the canvas after being tripped by a photographer’s wayward lens strap.

By the second, Golovkin had Geale’s timing down and back him into the ropes. Geale was moving laterally and not completely set before GGG started firing hooks his way. Geale managed to duck two shots, but GGG only needed to get one in — a right cross smacked Geale on the side of the head for the first knockdown. To his credit, Geale finished the round solidly with combinations to keep Golovkin cautious.

The third round was a chilling example of how much of an equalizer Golovkin’s power is. Geale managed to land a flush straight right off the ropes. In one sweeping motion, GGG lunged forward off the shot with his own right hand that put Geale on the canvas. Geale sprawled out completely and managed to get to his feet. However, Geale had no balance and was coherent enough to shake his head to the ref in acknowledgment that he had enough.

OTHER CHAMPIONS PUT ON NOTICE…BUT THERE’S ONLY ONE THAT TRULY MATTERS: Golovkin make it clear in his usual jovial and comedic post-fight interview that he wanted to unify the division starting with linear and WBC middleweight champ Miguel Cotto. The other champs, Peter Quillin and Sam Soliman, were also name-checked.

Golovkin is far overdue for his shot at the true middleweight title. Due to injury and clear avoidance on the part of promoter Lou DiBella, GGG didn’t get a chance to lift the belt off Sergio Martinez. Cotto’s trainer Freddie Roach was in attendance, so we can only hope that he fancies his man’s chances against the deadly power-puncher from Kazakhstan.

DON’T UNDERESTIMATE COTTO: While Golovkin would be the deserved favorite, I’d strongly disagree with the idea that Cotto wouldn’t even entertain a Golovkin showdown. If history has taught us anything, it’s that Miguel Cotto doesn’t shy away from tough fights. With his Pacquiao fight looming, he took on a dangerous bout against Joshua Clottey. When there was noise about facing Oscar De La Hoya, Cotto still took on Antonio Margarito. Austin Trout was a high-risk, low reward fight that cost Cotto .

So with that track record, is it really much of a stretch to think Cotto would face GGG in December despite a potential lucrative showdown with Canelo Alvarez looming for May?

JENNINGS GETS A LUCKY BREAK: Bryant Jennings got the biggest win of his career due to a 12th round point deduction to Mike Perez, winning via scores of 113-114, 115-112 and 114-113. A well-documented slow-starter, Jennings also seemed to be battling nerves as he let Perez outwork him and jump out to an early lead (arguably the first 3-4 rounds).

When Jennings took the fight inside behind a high guard, he did some great work to Perez’s bulging midsection along with short, snapping hooks upstairs.

The problem was the work was never consistent. There was too many instances of Jennings letting Perez grapple and lean on him. Jennings also spent A LOT of time complaining about these tactics (and head butts). You can argue this paid off in the end, because referee Harvey Dock took the deciding point in the 12th after Perez hit on a break. There was some controversy about the timing  of the deduction due to the fact there was never a “hard warning” to Perez. And considering the flow of the fight and neither exerting clear control, a draw just “felt” more appropriate.

The win puts Jennings in line to face the winner of current WBC titlist Bermane Stiverne’s defense against Deontay Wilder. Stiverne-Jennings is likely a tactical fight with Jennings having a good chance to win if he adopts to make it an inside fight like he did in spots with Perez. Although he’s untested against good competition, Wilder’s height, reach and power probably gives Jennings a lot of problems.