Skip to content
The fighters who dominated and carried boxing in 2013.

We’ve finally come to the end of BeatsBoxingMayhem’s year-end boxing awards. Last up are the fighters who carried and also dominated the sport in 2013. Read on and see if you agree. 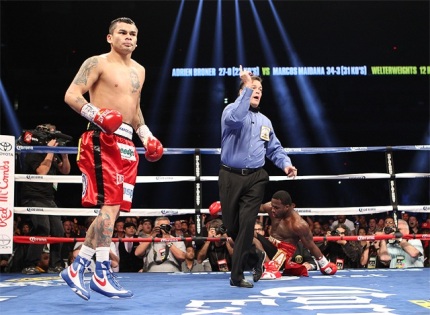 The fact that Marcos Maidana is now viewed as a legit challenger to Floyd Mayweather tells you how great a 2013 he had. The knockout of Lopez came in a fantastic shootout, and the Broner win also earned him the WBA welterweight title (his first belt). If Maidana wins the Mayweather sweepstakes, it’s quite the Cinderella story. Who would have guessed this for Chino after getting outclassed by Devon Alexander in 2012? 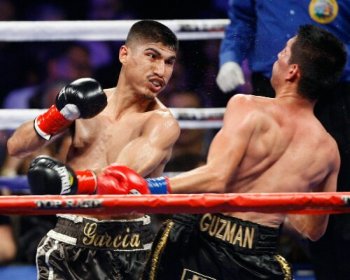 Despite problems this year on the scale, Mikey Garcia had his best outing as pro in 2013. He stormed out the gates with a three-knockdown, technical decision win over rugged Orlando Salido to win the WBO featherweight strap. He followed that up by easily knocking out Juan Manuel Lopez at featherweight (Writer’s Note: Garcia failed to make weight and lost the belt on the scales), and moved up to super featherweight to dispose of Roman Martinez to win the WBO strap in a second weight class. The fellow champions at super featherweight hail from the Orient in Takaschi Uchiyama (WBA) and Takashi Miura (WBC), which likely means Garcia will scale another weight class and seek out more well-known prey like Yuriorkis Gamboa. 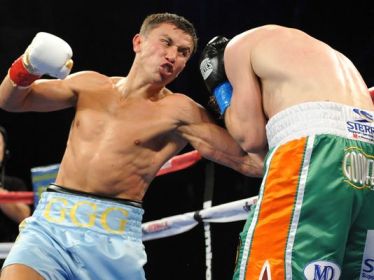 GGG’s 2013 is a good example of how to continue raising your profile despite being avoided by the best names in your division. Golovkin showed his dominance against middleweight hopefuls Rosado and Ishida, but rightfully endured criticism in the first half of the year since he had yet to meet a legit, Top 10 middleweight. He erased that this summer by leaving Matthew Macklin a yelping mess on the canvas courtesy of a left hook to the body. Stevens wasn’t a top 10 middleweight, but he was a dangerous puncher, allowing Golovkin to put to rest any questions about his chin.

To gain a higher spot on this list next year, GGG will need to finally lure Martin Murray in the ring, and then snatch the crown from Sergio Martinez.

– 2 defenses of the WBA and WBC junior welterweight titles

– Wins over Zab Judah and #2 man in the division, Lucas Matthysse

Ever since he knocked out Amir Khan last year, Danny Garcia has been viewed by most as a vulnerable, transitional champion. Even worse, he started having his skills overlooked by his loudmouth father Angel. And to be fair, Garcia did himself no favors by failing to finish off Zab Judah and struggling down the stretch of their April fight.

The Judah fight made Garcia a considerable underdog heading into his September fight against Lucas Matthysse. Instead of another KO of the Year candidate from Lucas, he got a boxing lesson from Garcia, who weather Matthysse’s first half aggression to shut his eye with lethal left hooks. A 11th round knockdown sealed Garcia’s win, who’s now received his rightful recognition as one of the sport’s premier fighters.

– Unanimous decision in Fight of the Year winner against Ruslan Provodnikov

Bradley turned his fortunes around heavily in 2013. He nearly lost (and some would say should have if knockdowns and 10-8 rounds were properly scored) to Ruslan Provodnikov but deliverd the clear-cut Fight of Year in 2013. He then showed his versaility and ring smarts by using his legs and speed to outbox Juan Manuel Marquez. Bradley now sits as the #2 ranked fighter in the welterweight division behind Floyd Mayweather.

Sergey Kovalev needed just 12 months to go from obscurity to world champion. It wasn’t just his power that served him well in all his victories — Kovalev showed adept skill in cutting off the ring and hurting his opponents with accurate, short shots. Nathan Cleverly, a long-tenured titlist and undefeated at the time, was no match for Kovalev and even considered retirement afterward. Kovalev is on the fast track to unifying the division with Adonis Stevenson now within his sights.

We didn’t get the usual Fight of the Year from him, but that doesn’t mean Akira Yaegashi was no less dominant in 2013. Ending 2012 on the sour note of losing a decision to Kazuto Ioka, Yaegashi bounced back with a tuneup KO over Saenmuangloei Kokietgym, and tough but clear decision wins Oscar Blanquet, Toshiyuki Igarashi and Edgar Sosa. The latter win is particularly impressive as it comes after Sosa’s win over Giovani Segura (who waged war with Hernan Marquez in a Fight of the Year favorite). If you ignored the little guys this year, Yaegashi is a good reason to start playing attention in 2014.

Rigondeaux arguably achieved the best win this year when he schooled Nonito Donaire in April. The Filipino Flash was a consensus Top #5 Pound 4 Pound fighter at the time, but was made to look like a novice. Rigondeaux followed the signature performance with an easy decision victory over a reluctant Joseph Agbeko. The challenge in 2014 for Rigondeaux will be opponent selection, as HBO backballed him for a time on the grounds that he’s a “boring fighter.” Put him in there against a Carl Frampton or a Kiko Martinez, and that boring tag will be forgotten.

– Successful defense of the WBC welterweight title against Robert Guerrero

The king stays the king…to a degree. Mayweather had an excellent 2013 in first making his Showtime debut against a credible Robert Guerrero, who cemented his welterweight credentials with wins over Selchuk Aydin and Andre Berto. Floyd easily outboxed him. Next up was the challenge of facing a strong light middleweight in Canelo Alvarez, whose performances against Josesito Lopez and Austin Trout had some enamored enough to believe he could dethrone boxing’s kingpin. Mayweather showed how foolish that was by completely dominating Canelo to remain the man in two weight classes. 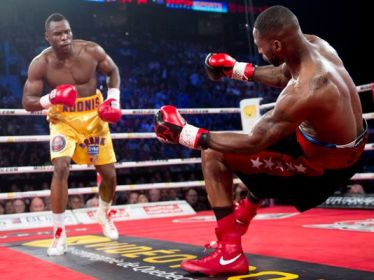 – Avenged lone defeat at the hands Darnell Boone by KO

2013 was the Year of the Black Superman. First, he showed his old-school mindset in rematching the only man to defeat him, Darnell Boone. Stevenson KO’d him in the sixth. He was supposed to just be a solid test for  champion Chad Dawson. Stevenson dusted him in the first round. And to show his reign was legit, he immediately took on two ranked challengers in Tavoris Cloud and Tony Bellew. Both barely won a round before being stopped. Stevenson gave you everything you could want in 2013 from a fighter. He was active, faced top challengers, and ended his fights with knockouts. He can do even better in 2014 with fellow champs like Sergey Kovalev on the horizon.