Skip to content
A list of fighters who will have their careers on the line right from the beginning of 2014. 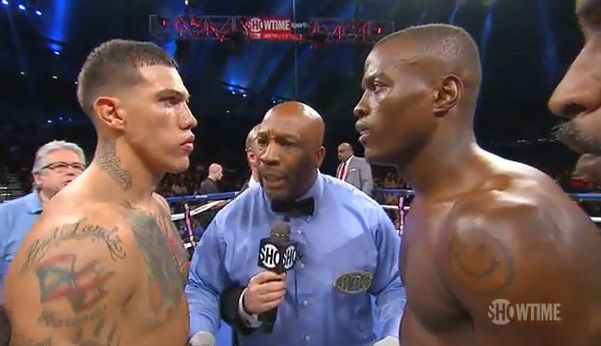 Note: Starting today (December 22), BeatsBoxingMayhem will count down 10 Award/Distinction lists on the Sweet Science in 2013. From your standard Fight of the Year category to a few curveballs like this list, I’ll be looking at the sport from as many angles as possible. Enjoy.

Wins and losses. Dollars and sense. These four pillars are what drive the hard reality of what it means to be a prize-fighter. Sometimes, these forces can work for them — a strong fan base can bring money despite the merits of your win-loss record. On the other hand, said record can be spun as a tool by bigger forces (promoter, networks, sanctioning bodies) to keep a fighter frozen out of deserved opportunities.

This list represents the fighters that, for various reasons throughout the last 12 months, find their careers at a perilous crossroads headed into 2014. No longer can excuses be made for them. And nothing less than absolute victory throughout 2014 will save their careers from the worst fate of all…general apathy.

One of the time-honored spectacles of pro wrestling is the bad guy (heel) champion retaining his title on technicalities and nefarious means. The tactics serve to infuriate the audience and bring a bigger payoff when the good guy (babyface) finally disposes him. Ricky Burns is a good guy by nature, but his two fights in 2013 have effectively ended fan faith in him and set the stage for his biggest threat, American Terence Crawford, to end his title reign in early 2014.

Burns started 2013 by getting soundly outboxed by unheralded Puerto Rican contender Jose Gonzalez. Even in his native Glasgow, Burns’ ineptitude in dealing with Gonzalez’s counter-punching and movement had him behind 84-87 on all three cards after the ninth. Then a miracle happened; not by Burns’ own doing, but in the guise of an injured wrist, which Gonzalez claimed was so bad that he shockingly quit. Burns got little credit for retaining his title, making his first fight removed from Frank Warren and under the banner of Eddie Hearn’s Matchroom Boxing a dubious one.

There wouldn’t be any redemption in Burns’ second bout of the year, a brutal September 7 battle with Ray Beltran. Instead of a boxing lesson, this time Burns was the recipient of a good ol’ fashioned mugging. Beltran made the bout an inside battle of durability, and repeatedly pillaged Burns’ frame against the ropes. In one of the more remarkable displays of courage seen this year, Burns fought from the second round on with a broken jaw. He refused to quit despite being dropped in the 8th.

On fair cards, Beltran would have left Glasgow with the WBO title. Instead, he had to settle for a shameful hometown draw. Burns, with a jaw that would later require a titanium plate in surgery, had to endure his own fans booing the decision, which to this day has overshadowed the bravery he showed that night.

Instead of achieving greater heights in 2012, Burns is now viewed as a lame duck champion by most. Negotiations are ongoing to face Crawford in March in Glasgow. With Crawford a HBO darling and holding the distinction of being America’s best lightweight, Burns has the chance to redeem himself to fans on both sides of the pond.

Although the broken jaw Ortiz suffered in June 2012 has kept him from active competition, that hasn’t stopped Victor from staying in the public eye. He participated in Dancing with the Stars, shot a hilarious “facelube” commercial, and recently delayed his boxing comeback to star in the Expendables 3.

Although these activities are definitely less painful than exchanging punches for a living, Ortiz has derided most of the fighters in and around his weight class. At every chance, he calls Josesito Lopez’s win over him a fluke. He’s on record as calling Canelo “overrated.” And who can forget Ortiz’s pitches for a Mayweather rematch?

These antics, coupled with his reputation as a “quitter,” has made him the butt of many jokes. When he showed up earlier this month in Brooklyn to officially announce his January 30 comeback against Luis Collazo, Ortiz was soundly booed.

From the above picture, it’s obvious that Ortiz is in his own world. However, the boxing world is not. The fact is Ortiz only has one victory in the last 2 years. In addition, he’s lost his last two bouts by knockout. Should Collazo pull off the win, it will serve as the final nail in the coffin regarding Ortiz’s credibility as a top fighter. 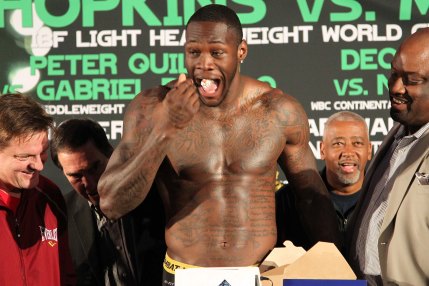 30 wins and 30 opponents not worth a damn. The 6’7, 28-year-old Deontay Wilder is no doubt an exciting fighter. He’s physically imposing, has massive punching power and is aggressive in his pursuit of knockouts. Problem is, he spent 2013 feasting on no-hopers (Matthew Greer, Nicolai Firtha) and washed-up former contenders (Sergei Liakhovich, Audley Harrison). Going into his sixth year as a pro, Wilder has yet to see the fifth round.

We’ll find out soon enough how good Wilder is courtesy of an undeserved #3 ranking by the WBC, who’ve ordered the #2 (Chris Arreola) and #1 (Bermane Stiverne) contenders to face off for the title vacated by Vitali Klitschko. In the meantime, you can watch Wilder KOs to support the belief he’s the real deal, or use clips like this to argue his competition thus far is a concerted effort to hide a weak chin.

Gary Russell has effectively been a “prospect to watch” for the past two years. He made the biggest mistake of his career in 2013 when he turned down a high-profile matchup against Daniel Ponce de Leon (Russell denies this) because he wanted to test his surgically repaired hand on an easier opponent (which he has admitted to). His promoter Golden Boy allowed the move, but his fight, a 10-round decision over Juan Ruiz, was not aired.

Hopefully, 2013 has shown Russell that talent alone won’t get him to the top of the super featherweight division. While allegedly he brushed off Ponce de Leon like another big fight would come, ESPN-level guys like Arash Usmanee, Javier Fortuna and Rances Barthelemy enjoy higher ranking due to their desire to take risks against good competition.

Will Russell dare to be great and take risks in 2014?

Gabe Rosado’s career took on the form of a Greek tragedy in 2013. He got the biggest exposure and paydays of his career, fighting three fights split between HBO and Showtime with one being broadcast on a Mayweather pay-per-view undercard. The big downside was that Rosado couldn’t manage a victory in any of these fights.

When you look behind the numbers, you can’t help be sympathetic. In January, I watched from ringside as he tried in vain to fight off Gennady Golovkin in his first fight at middleweight. The bloody affair wasn’t stopped until there was frantic shouting from his corner and most of us ringside. In May, I watched ringside in disgust as Rosado got jobbed via a split decision defeat to J’Leon Love, who later tested positive for a banned diuretic that got the verdict turned to a no-contest. And finally in October, Rosado seemed on the verge of a emphatic victory over Peter Quillin until a bad cut suffered on the left eyelid in the 9th lead to a TKO stoppage (despite repeated pleas by Rosado to continue).

Rosado now finds himself out of the title picture at middleweight and forced to drop back down to 154 to face Jermell Charlo on January 25 in DC. Again, Rosado will have the odds stacked against him as he won’t be the house fighter. But as sympathetic as most fans are to his tough 2013, time is running out. Another loss, no matter the circumstances, would be crushing to Rosado’s dream of becoming a world champion. More than any other fighter on this list, Rosado’s career depends on his next fight being the “W” that’s eluded him since 2012.

NEXT: On Monday, BeatsBoxingMayhem will recount the Top Masterclass performances of 2013.