Skip to content
All the news (and blood) from HBO's first 2013 "Boxing After Dark" show at Madison Square Garden.

The first HBO boxing card of 2013 is in the books and I’m headed back to ATL. While the main even didn’t exactly have the definitive ending everyone wanted, and the super featherweight title match draw between Rocky Martinez and Juan Carlos Burgos was a reminder of the alarming problems in boxing when it comes to judging, the Top Rank card was a success and hopefully leads to many more shows making their way to the iconic Madison Square Garden. On to the news and notes from the evening.

Upsets and Nasty KOs on the Undercard: It was nice to see a decent crowd for the undercard. Normally in places like Vegas, the venue doesn’t start to fill up until the televised portion begins. Top Rank smartly made sure popular local fighters like Glen Tapia and Sean Monaghan were on the card to ensure an eclectic ethnic mix of fight fans. When factoring in the main card fighters, you ending up with a melting pot of Kazakhstan, Irish, Italian, Puerto Rican and Mexican nationalities.

Puerto Rican prospect Felix Verdejo (2-0, 1 KO) was the most explosive young figher on the card as he needed two punches to blow away Tomi Archambault in just 21 seconds. Verdejo told the media the fight had three “firsts” for him. One, he had never KO’d anyone with just two punches. Secondly, he’d never knocked anyone out with a double left hook. And third, it was the first time he actually felt the power of his shot travel up his arm. Just imagine how poor Tomi Archambault felt.

Anthony Ferrante (dubbed in my press row at Jackie Jr. from The Sopranos), got the biggest win of his career with a brutal, face-down knockout over previously undefeated Olympian Isa Akberbayev. Those who had seen Ferrante before had characterized him as a “club fighter” at best, and in most derisive terms as a “bum.” Well, Akberbayev had him looking like a combination of James Toney and Eddie Chambers. After trading knockdowns in the first, Ferrante used his shoulder to avoid Akberbayev’s right and counter with his own, which began to carve up his opponent’s face. Akberbayev seemed only a punch or two from going down as early as the eighth and it seemed like Ferrnate was content with just a points win. However, he made a statement and lived up to his “Boom Boom” nickname by planting Akberbayev face-first with a counter right.

Akberbayev was motionless for a long time on the canvas and although he left the ring on his own power, word came that he had to leave the arena on a stretcher. It would not surprise me at all if he never fought again.

Rosado Is a “Good Boy,” Golovkin Is a Happy Killer: The script for this one was Gabriel Rosado was tough enough to put up a good fight, but ultimately would make Gennady Golovkin look like a monster.

The storyline was followed almost to the tee with Golovkin doing an excellent job from the outset of cutting off the ring and making Rosado deal with mental and physical pressure. Rosado’s eyes were as wide as half dollar coins as he was wary of every Golovkin power shot that came his way. Golovkin made the fight harder for himself by using his jab in spots — when he was consistent, it landed flush through Rosado’s guard and set up left hooks and right hands. It was the right hands that cut Rosado above the left eye in the second and had him wobbling badly in the third.

It got ugly from there. Rosado had his moments, particularly in the fifth, when he caught Golovkin with some nice uppercut and right crosses. Although the power-puncher from Kazakhstan was swelling, he never seemed in danger and nodded approvingly when Rosado caught him. On the other hand, the challenger’s face took was rearranged into a garbled mass of blood and swelling and broken bones by the seventh. The crowd and press row began murmuring of when the fight would be stopped, but with Steve Smoger being a lenient ref in regards to letting guys take punishment, it fell on trainer Billy Briscoe to save Rosado. Rosado’s father opposed the call, but Briscoe put it as blunt as possible in stating he had to stop it before Gabriel was killed.

Word came back from Golovkin’s team that he’d be willing to grant Rosado a rematch so long as he accpted his request for them to start training together. Max Kellerman didn’t have his finest interview moment in trying to ask Golovkin, as non-native English speaker, elaborate questions. But it did yield the line of the night in Golovkin calling Rosado a “good boy.” Usually, someone of Caucasian descent calling a man of color a “boy” is ground for a fight, but it was obvious this was a language barrier issue and there was no ill intent.

Far as what’s next for Golovkin, I’d love to see him in there with a Peter Quillin or Matthew Macklin. Golovkin has his flaws (minimal head movement, not particularly fast), but I can’t see anyone in the middleweight division he’d have a subpar fight with. On Rosado’s end, I hope he’s not the exception to the rule and that HBO and other networks start to put more stock in a fighter’s ability and level of competition over having a glossy but ultimately vapid record. 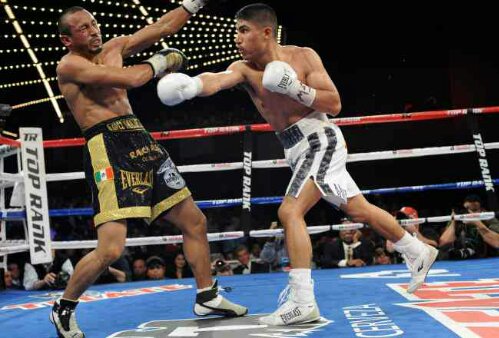 Garcia Becomes Legit: Yes, the headbutt foul leading to the technical decision ending was disappointing. Even with that finish, you can’t help bit marvel at the clinic put on by Mikey Garcia, who had Orlando Salido completely outclassed from the opening. Like many people, I believed Garcia was going to put through the fight of his life. Instead it was Salido, dropped by left hooks in the opening round, who had the look of a shell-shocked warrior.

Every clean shot had Salido either backpedaling, his knees buckling or flat-out tasting the canvas, as he did again with the latter in the third and fourth. To his credit, he continued coming forward and trying to brawl, having marginal success and forcing Garcia to hold before the accidental head butt. Even so, it’s hard to imagine a demand being there for a rematch. I liked that Garcia called out Yuriorkis Gamboa. It’s an easy, exciting fight to make and much better than watching Gamboa get bullied and thrown around the ring by Timothy Bradley (a fight that’s amazingly being discussed now).

Keep It Up and Do Better, MSG: Although we had a full house last night, I felt the buzz could’ve had been even better around the city if just an extra step had been taken on the promotional end. I’m not sure about their policy, but Madison Square Garden should strongly consider making the weigh-ins open to the public.

I strongly suggest coming through for future shows at the Garden’s Theatre venue. It’s spacious enough for a good crowd but small enough that you’ll have a good view no matter where you’re seated, as you’ll see from a few pics below I posted on Instagram last night.

That’s all from NYC. Let’s hear your thoughts on the card. 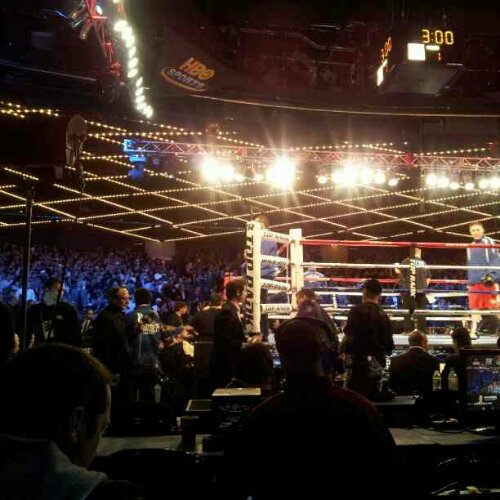