Skip to content
"Who else is he going to fight other than me to get himself back in the driver's seat?" - Carl Froch 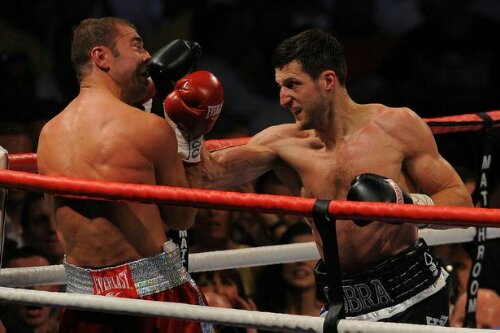 Lucian Bute returned to the ring this weekend, scoring a 12 round unanimous decision over Denis Grachev in his native Montreal. But the win did little to convince Carl Froch, who shockingly routed Bute in May to a fifth round TKO, that their scheduled 2013 rematch will go any different.

In a video interview with Sky Sports, Froch broke down Bute’s comeback win and the importance of their potential rematch.

Bute didn’t look like he was fully motivated to me. He took his time and labored the first 2-3 rounds. He sort of used his jab and moved around; it’s hard to change your mindset and get something going after a sluggish start and not have a sluggish fight all the way through. I think the good thing is that Bute picked it up in the end and finished very strong. He had some good moments in round 11 and had the second burst in the 12th. He dominated and took control to finish strong and did what he had to do to win.

Who else is he going to fight other than me to get himself back in the driver’s seat? I think the fight with myself needs to happen if he’s serious about staying in this sport. I don’t know what his mindset is but it’s a big fight for him at home. He’s probably going to get paid very well and it’s either going to be a foot back in the door for him at the world level or maybe on the flip side a big payday for him to retire on. I think the fight will probably happen, it’s just the mindset he’ll have coming into it.

I know I’m very confident after the annihilation and whooping I gave him in the first meeting… I know it was at home in Nottingham and [there] was a lot of pressure on me. The odds were stacked against me; all the bookies had him as the favorite. He was coming in an undefeated fighter and I was coming off a loss. I put in a career best performance… this will be my ninth world title fight when I face Yusef Mack on the 17 of November. That was a very good performance I put up against Bute and wiped the floor with him.

The question mark now is did that finish him or was that [his last fight] just a labored performance? We’ll find out if and when the rematch happens with me.

At press time, the tentative plan is to hold the rematch in either March or April 2013.

Carl Froch sure is brimming with confidence, isn’t he? You can’t blame him after the beating he put on Bute. It’s just as the Englishman described — he wiped the floor with Bute in a beating it’s hard to imagine he can reverse. We can look at Miguel Cotto as a recent example of a fighter coming back to avenge a bad beating (his rematch TKO of Margarito). But with that fight, we’re all aware of the controversial circumstances that will forever cloud the first fight and not to mention Miguel had his moments. Bute was ran over from the opening round to the last.

There was nothing I saw in Bute’s win over Denis Grachev to make me believe Froch won’t score another KO and perhaps live up to his words of retiring Bute. Nonetheless, should Bute go through with the rematch, he deserves a ton of credit. Great fighters avenge defeats, and we’ll hopefully find out if Bute can show he’s still a force.