Skip to content
INDIO CALIFORNIA — Last Saturday’s ShoBox tripleheader signaled the end of a successful career and the continued hopeful prospects of three fighters, as Cornelius “K9″ Bundrage, Erislandy Lara and Gary Russell Jr. all walked away with dominant victories.

Bundrage kept his name alive in the September 15 Canelo Alvarez sweepstakes with a sloppy, mauling win over Cory Spinks. It looked to be a short night when Bundrage dropped Spinks hard with an awkward overhand right in the first. Spinks never truly got his legs back for rest of the fight, but the former champion gamely tried to fight out of it by coming forward and fighting inside. Bundrage, perhaps due to ring rust from a year off, allowed the weaker Spinks to push him back by fighting in spurts and spending several rounds just looking for a single knockout punch.

Bundrage trainer Emanuel Steward was not pleased, and told his fighter with an assortment of choice four-letter words to stop letting Spinks gain confidence and continue mauling him inside. Bundrage finally headed those words in the seventh, scoring three knockdowns off right hands to secure the stoppage.

Spinks might continue fighting, but this will be the last time we see him on TV getting a title shot or in an important contender matchup. His balance was bad and every solid shot seemed to hurt him. Without his legs, a fighter with Cory Spinks’ style will always be in for a long, painful night. He’s gotten the most out of his career and has been in the mix at the top of the light middleweight division for the better part of 6-7 years. Spinks has nothing left to prove and at 34 can leave in-ring competition with his head held high. 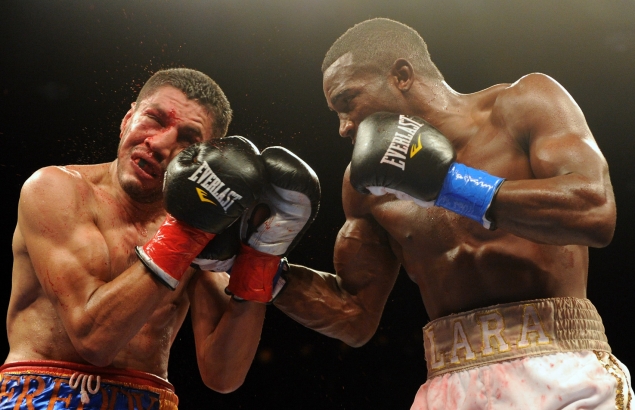 He had to work harder than expected, but Erislandy Lara still secured a unanimous win over a game but outclassed Freddy Hernandez. Lara mixed his attacks between catching Hernandez off the backfoot and around the guard with counter right hooks, and coming forward behind accurate straight lefts and hooks to the body. Hernandez never stopped coming forward and even bothered Lara at times with body punching. Nonetheless, by the second half of the bout most of Hernandez’s punches lacked power while Lara still landed clean power shots (64% of his power punches). The final scores read 99-90, 98-91 and 95-94.

Gary Russell Jr. continued his gradual climb up the featherweight rankings with an easy third stoppage of Christopher Perez. Like most of his opponents thus far, Russell Jr.’s hand speed was too much. In exchanges he got their first with blistering hooks, dropping Perez badly at the end of the second round. Perez had recovered by the third, but was essentially a deer in headlights and hit the canvas three more times in the third to prompt the stoppage. Russell Jr. is on record stating he’d like his next opponent to be former WBO featherweigh titlist Juan Manuel Lopez.

So what’s next for this crew? Bundrage at 39 isn’t the ideal option for Canelo’s first pay-per-view opponent, but at this stage he’s damn near the only one available. We’ve already had three opponents spectacularly fall (Paul Williams, James Kirkland, Victor Ortiz), one get declined by the WBC (Austin Trout), and another simply getting ignored due to lack of name recognition (Erislandy Lara). Facing Bundrage would at least be a unification matchup and he’d come to fight for however long it lasts.

It wouldn’t be pay-per-view worthy, but Golden Boy could move forward with the plan to stage it on CBS.

Lara didn’t blast out Hernandez like I expected, but he still looked good in taking the decision. His business prospects are looking up, as it’s been confirmed that Lara’s brought on Al Haymon as an advisor. Following the victory, Lara’s trainer Ronnie Shields said they’d love a shot against Bundrage, which seems like a no-brainer since they both fought on the same card and are in the same division. But Steward called the fight “low reward-high risk” and declared Bundrage was only interested in big fights.

Manny Steward is no fool. The between the lines translation is that Bundrage would get beaten, probably badly, for much less pay than what’d he receive against someone like Canelo. Lara throws straight, highly accurate shots while Bundrage throws wide, looping punches. It’s no question whose blows would get there first.

Gary Russell Jr. showed clearly he’s done with this level of competition. While his desire to jump in there with someone like JuanMa is admirable, he still needs 2-3 more fights before considering that level. Hopefully we’ll see Russell Jr take on some Top 15-20 guys now. I’m still interested to see how he reacts when someone with some power connects flush.