Skip to content
Atlanta's Buried Alive festival this week. Read about all the can't-miss films and how to get tickets.

It’s that time of year again to be disturbed courtesy of the 14th annual Buried Alive Film Festival. I had the pleasure of covering this massive horror event last year and can happily report the event has gotten more ambitious with screening 8 features and nearly 50 short films over a four-day period starting tomorrow (November 14) at Atlanta’s 7 Stages Theater.

And while I don’t want to spoil some of the confirmed festival surprises, here’s an overview of what to expect and why this weeklong event is a must for all fans of the cinematic macabre.

THE ANNUAL SINEMA CHALLENGE IS ALWAYS THE SLEEPER EVENT

One of the most unique aspects of the Buried Alive festival is its fourth annual Sinema Challenge, where local directors are tasked with creating an original film within 13 days. The filmmakers don’t just have free reign — they must center their projects around two random drawings which assign a horror genre and subject.

You can imagine the stress of such a quick deadline, but last year showed me how well pressure can create diamonds when dealing with the talents we have in Atlanta. I’m expecting this year to be no different.

The other great aspect is the crowd is red-hot for these projects as the family and friends of the filmmakers and actors come out to support. This was a sellout last year and again for 2019. But if you didn’t manage to snag a ticket, don’t worry as BeatsBoxingMayhem will have full coverage up tomorrow morning on all the winners.

The shorts block for the first day is appropriately titled “The First Shovel in the Grave is Always the Best.” For those of you who like your horror making you say “WTF did I just watch?” this is the can’t-miss block for you. From straight-forward gore to a feral, cannibalistic lover to even a frightful alien encounter told through a living painting, you’ll get as much of a mind-fuck as your senses can handle. 9 films will be showing with a total run time of 81 minutes.

The feature for the evening is Antrum: The Deadliest Movie Ever Made, which tells the story of a “cursed” film that is alleged to kill everyone who views it. You don’t need to know any more than that, but for the insufferably curious, you can get a little more of the mythology here.

This is where it’s at for feature lovers as Day 2 spotlights three films. The first is VFW, a wild and gory tale of war veterans defending their favorite bar against deranged and mutated drug addicts. It’s as crazy as it sounds and stars Fred Williamson, Stephen Lang, and William Adler as the war vets looking to make a bloody last stand. A treat for Grindhouse fans and also notable for being a Fangoria-backed film.

Andrew Leman’s 2005 film The Call of Cthulhu is getting a whole new soundtrack courtesy of the jazz fusion band Samadha, who’ll be performing it during the film’s 10:30 p.m. special screening. Last year, the band did a fantastic job with the 1915 silent film classic The Golem, so I personally can’t wait to see their approach to a modern flick.

The last feature of the day will be a midnight screening of Hellbound by Ben Winston. What makes this one of the more intriguing films of the festival is the fact Winston shot the project on 16mm for under $5000. We can certainly expect a 60s and 70s visual tone, but we’ll see if the premise, which has two cocksure bikers falling into a horrific journey through the mountains, lives up to the name.

On Saturday, Short Blocks #4 is one to keep an eye on as the women take center stage (“Ladies of the Graveyard”).

There are certain types of horror experiences that are completely unique to the female experience and that’s captured here in films like How To Be Alone and also the brooding Lili, which is sure to elicit strong reactions from those in attendance.

On the more light-hearted side, Blast-Off Burlesque is returning for a live rendition of The Toxic Avenger. Last year, they did a hilarious take on The Lost Boys (complete with their own buff saxophone player) so I can only imagine what they’ll cook up for Toxie. The showcase kicks off on Friday at 10 p.m. 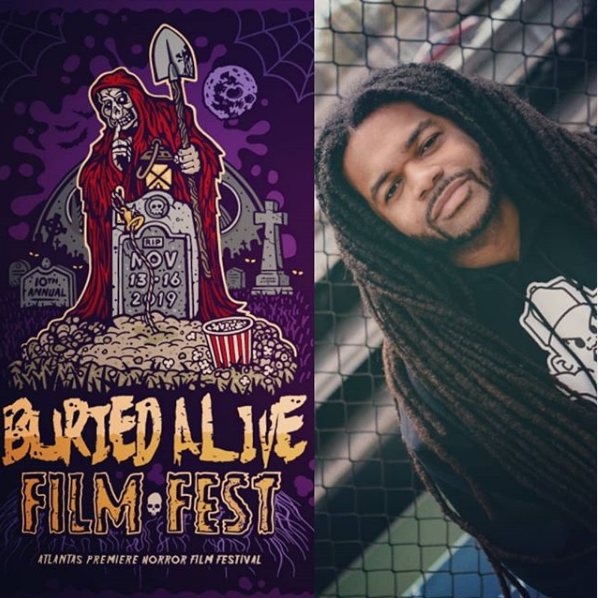 Sunday will be a special day for me as I had the honor of being one of the judges to help decide this year’s award winners. It was extremely difficult and we took hours to debate the merits of all these projects and narrowed down our choices to Best Feature, Best Animation, Best Special Effects and best WTF movie. The ceremonies will begin at 8 p.m.

In addition to the awards, it’s still worthwhile to come out early as several documentaries will be shown throughout the day, including ones on the history of the counter-culture group The Church of the Subgenius (2 p.m.) and The Legacy of the Universal Werewolf (4 p.m.).

If you’re in Atlanta, this is the hottest ticket in town for horror. Don’t miss it.