Skip to content
J. Zachary Thurman explains to us why you've never met a killer doll like Finley... 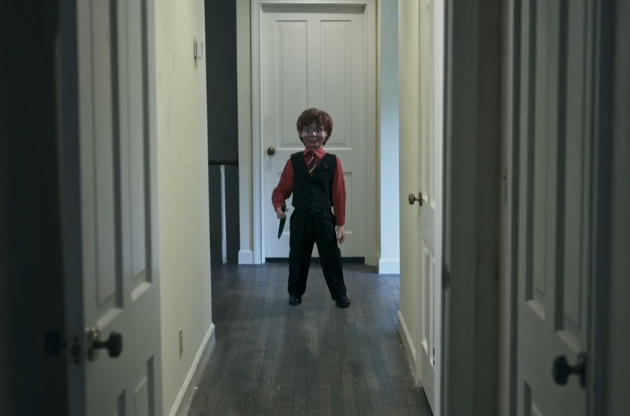 Ever wonder how much trial and error it takes to become an efficient horror movie killer? Look no further than J. Zachary Thurman’s Finley, premiering Friday night at the Atlanta Horror Film Festival. Unlike the typical possessed killer doll motifs, Finley has a legit gripe for his murderous streak — stopping a group of college kids from taking over his home (gentrification isn’t kind to longtime residents, people…even murderous doll residents).

I talked with Thurman about Finley’s origins, balancing terror and comedy, and overcoming the challenge of fitting in 25-minute short into festival guidelines.

BeatsBoxingMayhem: I won’t see the film until the festival, but despite the cover giving us a classic slasher vibe, I get the feeling this will be a story about Finley’s journey rather than us getting a traditional “final girl” from the college kids. Am I on the right track?

J. Zachary Thurman: Yes. Finley is primarily focused on Finley’s journey as he learns from his mistakes. It was decided early on that this is the story of a dummy and not the story of the three college students he terrorizes. Yes, they serve an important role to his story and character development, but I wanted the audience to have something new and unique to watch. I think it flips the idea of what it means to be the victim — Finley is evil, yes, but he is also, in a way, the victim of this movie and you’re almost rooting for him to kill the innocent college kids.

With his appearance, you can straddle the line between terror and humor with a character like Finley. Would you say the comedic and horror elements are balanced or did one side become more dominant?

I’ve always been fascinated with blending genres and especially comedy-horror. My first feature film, Furry Nights, did comedy by having characters in furry costumes and campy dialogue. But today’s audiences are smarter than ever so I wanted to trick them so they never know if a scene is about to be funny or terrifying. Writing Finley, I knew I wanted the entire narrative to walk through three stages: Horror, Comedy, and then back to Horror. I think it evens out. I recently was at a premiere where people were hiding their faces during the first few minutes of the film and by the end they were laughing and begging to take pictures with the prop doll.

At 25 minutes, Finley is one of the few longer films among the shorts. Did you originally envision a longer piece or did the creative process yield more opportunities as filming commenced?

My first cut of Finley (now the director’s cut) runs 46 mins long. I really wanted the film to be 12 minutes, but after getting into production and seeing how the character arc was shaping up, I knew it needed more time. It needed time enough at the beginning to make the audience believe they are watching just another horror film about a killer doll, so when that initial “kick” of comedy comes in they are immediately on the doll’s side and wanting to see more of Finley’s shenanigans. We’ve been very lucky with festivals that watch the entire film, but we’ve also seen the downside of having a length like 25 mins. Many festivals will write me telling me how much they enjoyed the film, but do not have time to program it. But that’s okay! The 25 min runtime is the bare minimum to tell Finley’s story correctly.

Some filmmakers would say it’s better to keep the monster hidden as the imagination is scarier than reality. From the trailer, it doesn’t appear you had those reservations with the character. What about the Finley character has made you confident he’ll resonate with audiences?

I actually do agree that the scariest monsters are always the ones you don’t see; however, Finley isn’t really a monster. He’s an anti-hero. Finley is our titular character and as such this story is his — he’s a likable villain that deserves the limelight rather than hiding in the shadows.

Is this just the beginning for the Finley character and what other projects are on deck after this?

We have a few ideas for a sequel or even potentially remaking this into a feature film, but I do think his story was told. His character arch is definitely closed, so will he return? Perhaps. I owe a lot to Finley so I plan on having him appear in some of of my future projects as a little easter egg.

As for the upcoming projects, I start production on a new horror short in November. This one is going to be a challenge because it is a psychological horror. Comedy-Horror has always been my go-to and I’m always looking to challenge myself as a filmmaker (as I did with the puppeteering on Finley) so this one is cookie-cutter horror. Hopefully, I’ll be able to share it with you all next year!

Finley debuts Friday night during Shorts #4 Block (“From Inside the House”) starting at 7:50 p.m. Screener and daily passes are available at http://www.atlantahorrorfilmfest.com/tickets.html.

Keep up with all of J. Zachary Thurman’s work at http://unpluggedfilms.com/films/.