Last weekend, Ring of Honor wrapped up an extended TV taping here in the Atlanta. There were some major developments, storyline and otherwise, that will heavily impact ROH through the first quarter of 2019. Juice Robinson Looks to the Past to See the Future

The biggest news came from Juice Robinson, who delivered a “State of the Union” style promo on ROH’s current status. Juice feels that the brand has lost its values, specifically pointing out to the Honor System falling out of favor. For Juice, it’s the Honor System that gave us the great matches and legendary reigns from the likes of Samoa Joe and Bryan Danielson.

But in order to restore ROH to the glory days, Juice needs to be invested. He earned a big pop for telling us that he’s “not here for a cup of coffee” and plans to have an extended 2019 run. To that end, he surprised all of us in bringing out Bandido, David Finlay, Tenille Dashwood, Tracy Williams and Mark Haskins to form LifeBlood.

“The reset button has been hit and this is the new era of ROH,” Juice declared.

On paper, this looks great…perhaps too much so. LifeBlood is a good chunk of the new talent within ROH, essentially taking some excellent matchups and feuds off the table. The first hour of taping indirectly touched on it by having good matchups between David Finlay and Tracy Williams, and Bandido and Mark Haskins, the latter arguably being the match of the night.

Still, it’s one of those “good problems” for a promotion to have and rest assured there’s plenty of salivating tag and six-man matchups for LifeBlood to get involved in against The Kingdom, Briscoes and Villain Enterprises.

Cobb Will Face a Real Man in Next Defense

The TV title picture got its #1 contender when “The Last Real Man” Silas Young defeated Eli Isom in a solid match. The theme was the underdog Isom fighting for respect and refusing to stay down. Young taunted him for being a “kid” and not worthy to face him. But as the match progressed, Isom began to show his own nasty streak and got several near falls before succumbing to Young’s “Misery” finisher.

Young then cut a promo on Cobb and the two had a face-off before Shane Taylor interfered. Cobb was jumped and laid out. Interesting to note that Taylor lifted up the belt over Cobb and not #1 contender Young, perhaps hinting we could end up with a triple threat matchup.

Although I would’ve preferred a Cobb-Isom matchup due to the style contrast, Young will make Cobb dig into a more aggressive style and make for an old-fashioned, smash-mouth match.

Sabin came up limping a few minutes in. I can’t recall exactly where the injury occurred, but he wasn’t in the process of doing anything risky or out of the ordinary. The look on his face said it all as he rolled outside, having gone through three previous knee surgeries.

Reps from the back huddled around him for the entire match as he couldn’t put any weight on right leg and looked in considerable pain. Taylor won by pinning Titus, but it was an afterthought as we all looked to Sabin who had to be helped to the dressing room.

ROH later announced that he likely he suffered an ACL tear, his second on the right knee.

Sabin is likely gone for the rest of 2019. But knowing his history, no one is surprised by the short statement he left on his Twitter. 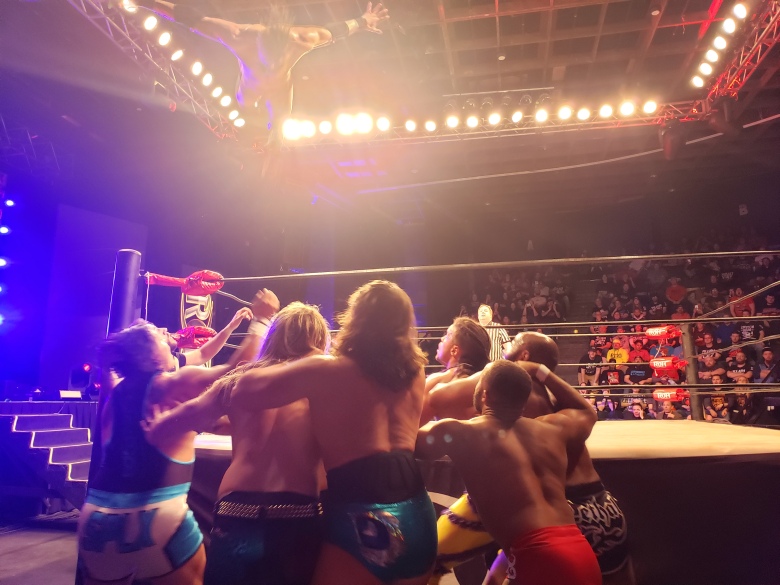 Prior to this match, LifeBlood interrupted champion Jay Lethal’s promo and had a friendly debate on who will restore ROH to glory. It was decided that this could only be settled in the ring and Lethal recruited Cobb, Flip Gordon, Dalton Castle and Jonathan Gresham for an awesome 10-man tag main event.

With so many guys, everyone had to get their spots in quickly. Nonetheless, Bandido and Flip Gordon got the biggest reactions when they delivered some acrobatic chain wrestling sequences. Bandido also got the biggest spots with two top rope dives onto everyone.

The final sequence was Haskins catching Castle in the sharpshooter for the submission win. We ended the show with the Honor handshake and Lethal putting LifeBlood over as the future oh ROH. Who’ll be the first to dispute that claim?

Newsflash! The Briscoes still don’t give a damn about anyone. HonorClub members can currently check this match out as it opened the TV tapings. Colt suiting up was a nice surprise. The Briscoes won with the Jay Driller and then proceeded to put Chuckie through a ringside table with a top rope elbow drop. Great spot.

Briscoes get the win and Mark puts Chucky through a table afterward with a top rope elbow drop. Jay tells the camera "It's a new year, no one's safe!" #ROHAtlanta pic.twitter.com/FkHS7fzj8J

A good back n’ forth, physical matchup. Finlay was sporting red welts from Tracy’s chop but gave as good as he got. Lots of near falls before Tracy won it with a piledriver. Now that they’re in a stable, it’ll be awhile before we see this matchup again.

Two more LifeBlood members that made their “last” match count. In fact, this was my Match of the Night. Haskins focused on wearing down Bandido’s leg for the sharpshooter. Bandido showed off some good countering ability and finished the match with a springboard German suplex.

Bandido gets the win over Haskins with a springboard German duplex. Match of the night so far. Lots of good submissions from Haskins working the leg. #ROHAtlanta pic.twitter.com/jSW3ZRx0up

Crowd was giving Young grief for his tights being a size too small. Good match with Isom seemingly close to pulling it off. Young wins with Misery.

Skyler runs down the Atlanta crowd until Villain Enterprises’s music hits. PCO was very over and hit 2 sentons onto the floor for big pops. Scurll gets the submission with a chicken wing on Hollis.

The Kingdom comes out and taunts VE during their celebration, setting up a match for a future taping.

A bit awkward to start, but ladies found their groove. Crowd seemed a bit perplexed by Vaughn’s baseball gimmick but warmed up after she hit a running corner knee strike (tapping each turnbuckle beforehand like she was running the bases). Klein got the win with a modified fisherman’s suplex. 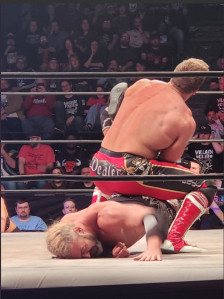 Shockingly, this match was the first time the NWA title has been defended in Atlanta since 1993. A bit of plodding match that picked up when Black mistakenly caught Kamille Kaine with a running dropkick through the ropes. Crowd was into Aldis and he got the submission with the Texas Cloverleaf.

Crowd was into the match until Sabin went down early with the knee injury. Kenny had a hard-on for Gordon and got tossed for hitting him with a chair. It was a nice spot as he caught Flash while he attempted a suicide dive. Taylor got the pin with a tombstone on Titus.

Fun big guys vs. small guys match, with the latter’s offense attempts causing them to literally bounce off the rotund Bouncers. Beer City Bruiser got the pin on Kross with a frog splash.

Kross had a funny spot where he teased a Dragonball Z “Kamehaameha” attack before Nova pins him.

Cool match with some big dives off the apron from all the ladies. Sakai looked to be in control until Rayne caught her with a reverse DDT for the win. Sakai had some animosity after the handshake by sliding out of the ring instead of letting Rayne help her up. Wouldn’t mind seeing those two ladies in a one-on-one matchup.

Haskins is probably the first LifeBlood member that gets a world title shot. He ended the match by making Castle submit to the sharpshooter. Everyone shook hands except Castle, who looked to be selling the back pain.