Chris Eubank’s expected a coming out party and instead received a boxing lesson from George Groves, who worked diligently behind a disruptive left jab to score a clear unanimous decision (117-112, 116-112, 115-11) at the Manchester Arena.

It was clear early on that Eubank didn’t come into this fight with a Plan B. He fully expected his athleticism would allow him to get inside and use his explosive power. Instead, he found himself stuck on the outside and eating jabs. When he attempted to barrel through, Groves would tie him up and force a reset at ring center. This essentially was the pattern of the entire fight. 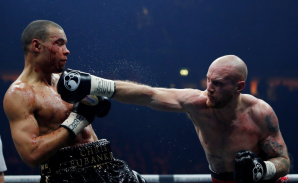 As the fight wore on, Eubank’s attempts to get inside got more and more reckless. We got errant fouls from both, but Eubank would get the worst of the legal and illegal actions. He received a bad cut over his right eye from a clash of heads. He was lucky in the middle rounds when the referee missed a flash knockdown.

Eubank found his best success when he took risks and worked from mid-range. Groves would give ground to the ropes and Eubank had space to pound the body and exchange upstairs. Eubank particularly did this well in the championship rounds where Groves’s stamina began to wane.

We would find out later that Groves suffered a dislocated left shoulder early in the 12th, robbing him of the left jab that kept Eubank’s contained. The challenger took full advantage and dominated the stanza, but Groves showed durability and slickness by rolling with of Eubank’s power shots.

At press time, the severity of Groves’s injury is unknown. All are hopeful it won’t be an extended delay as Groves is set to the meet the winner of Callum Smith and Jurgen Brahmer (February 24) in the World Boxing Super Series Finals. Usually, recovery time can range anywhere from six weeks to three months.

In the meantime, Chris Eubank has to take a long hard look in the mirror. It’s time to stop believing his own hype and get with a new trainer. Naseem Hamed was commentating and absolutely ripped him, going as far to say Eubank showed he’s not a world-class fighter. It’s hard to argue with that considering Eubank was rendered clueless by Groves’s jab and look like an amateur throwing wild haymakers.