Skip to content
All good things must come to an end... 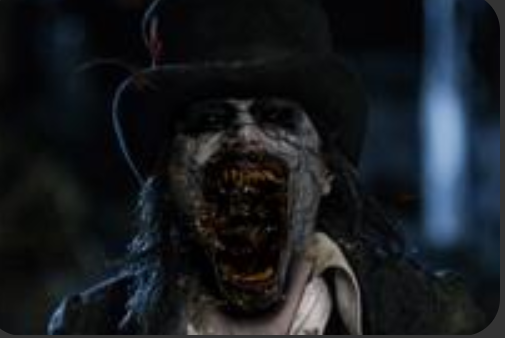 After four days, we’ve reached the final day of the Atlanta Horror Film Festival. While this day was shorter than day three, we were treated to a creative block of “weirdo” shorts and a full-length feature that takes horror to the rodeo.

As the title implies, this final block of short films was for every off the wall submission that couldn’t be easily defined.

“Cold Process,” by William Pisciotta, goes back to a simpler time when we had door to door salesmen. This one was heavy on Southern charm and attempting to sell beauty products to a lonely housewife. They flirt, but there is a sinister flair to the banter, and we find out it’s due to the salesman hawking bath products made from human flesh. Seeing the victim’s last moments juxtaposed with the salesman’s pitch is particularly effective. Another subtle theme is our insatiable consumerism and general disregard about where our products come from (diamonds, for example).

“Alfred J. Hemlock,” by Australia’s Edward Lyons, follows the story of a woman being propositioned by a demon. Hemlock is said demon, and he preys on people during their weakest moments. In this case, the woman had just been dressed down and abandoned in a dark alley by her abusive boyfriend. Hemlock’s hook is his promise to give you power over those who have wronged you. But when the woman resists, we get to see how evil (and funny) Hemlock can be. It wouldn’t surprise me if he were related to Beetlejuice.

Imagine being the only one who can see this face. Matthew McGahren’s “Grinning Man” tells the story of a young girl terrorized by a ghoulish figure only visible to her. Unfortunately, The Grinning Man can do more than just look menacing as he slaughters the girl’s entire family in her bedroom.

At 21 minutes, Vanessa Ionta Wright’s “Rainy Season” is the longest entry. It also follows familiar ground as a rendition of the Stephen King story. We find a young couple arriving at the small town of Willow. Upon visiting the local general store, they are warned to leave for at least one night. Of course, they disregard it and are in for a night of terror at the hands of unseen monsters. Overall, the story reminded me of Shirley Jackson’s famous short story “The Lottery” in that we see how evil a societal tradition can be.

My absolute favorite was Samuel Goodwin’s “Homesick.” Over the course of this festival, I’ve watched numerous films that feature kids getting terrorized. But this is the first one where we see a kid fight back. The 12-minute film finds the young child spending time alone waiting for the return of his mother. As night arrives, we begin to wonder where are the adults and why the child seems on such high alert. We discover it’s because this world is infested by zombie-style monsters. But no need to fear, this child was well-prepared by his mother, and shows how deadly he can be in putting down a threat.

Lasso: I have a confession to make. I wasn’t looking forward to this film. I mean, horror set at the rodeo? How creepy could that possibly be? Well, I’m happy to be proven wrong, because Evan Cecil’s Lasso had a gumbo mix of legit perilous moments for the heroes, gruesome kills (on both sides) and a transformative journey for the main character.

The plot centers on Kit (Lindsey Morgan) and Simon (Andrew Jacobs), two young chaperones for an Active Senior Tour group that is visiting a remote, small-town rodeo festival. Kit is hands-on and personally invested in the group while Simon is aloof and clearly there for the paycheck. Things take a turn for the worse when the cowboys turn out to be bloodthirsty maniacs who want to treat the group like human livestock.

Initially, you’re expecting Kit to be the focus since a pretty young woman in distress is a straightforward horror trope. But Lasso gets creative by splitting Kit and Simon up to lead separate groups once the killers arrive. From here, we see Kit is much more valuable in a crisis — she works to keep the seniors calm, tries to fix the broken down bus, and later searches for an alternate escape route. In contrast, Simon is indecisive and cowardly when confronted with any of the killers (even when he has a numbers advantage).

Luckily for Simon, early on he’s surrounded by his own group that includes the most formidable good guys in the flick. Enes (Sean Patrick Flannery) is a one-armed cowboy who’s still deadly enough to take down a few killers himself. Trish (Skyler Cooper) is a transgendered female bull rider who more than holds her own in hand to hand combat. And rounding out the crew is Rosheen (Heather Mignon), a self-centered rodeo queen that knows the area.

A male lead in a horror film is always challenging since we instinctively don’t give them liberties to be afraid. When Kit flees, we’re rooting for her to get away. When Simon ran away or hesitates to fight one of the killers, I heard audible sighs from others in attendance bemoaning his cowardice. It became more galling when his shortcomings lead to others being killed. However, it builds a gradual but steady redemptive climax for his character where he has to outwit the killer cowboys’ strongest fighter one on one.

Kids and seniors are considered the most vulnerable members of our society, so inserting a group of them in a horror setting made for some dismaying kills. Most simply didn’t have the physical ability to keep away, and we see a variety of brutal deaths befall them (taser, bludgeoning, skull fractures).

Fortunately, the killer cowboy group gets their comeuppance in satisfying and macabre fashion. All the survivors get in on the fun, which includes dismemberment and a cow brand to the face.

You won’t like Simon for most of the film (hell, you still might not like him by movie’s end), but he will have gained your respect for saving the day.