Skip to content
Chivalry doesn't exist in the streets.

It wouldn’t be complete year in Hip-Hop without a high-profile jumping. The latest spectacle came yesterday courtesy of A Boogie and PNB Rock, who paid Lil B a physical receipt yesterday at the Rolling Loud Festival for a preceived Twitter slight. Over the years, Lil B has garnered a lot of good will beyond the lyrical troll content that ignited his popularity and birthed an entire subgenre of adherents. His slang and brand has become a mainstream staple on platforms like ESPN, and rececently he’s even taken up the mantle of defending legends like Nas from slander. All that has mainfested with almost universal condemnation for the actions of A Boogie and PNB Rock, who for all intents and purposes are being viewed like Brutus and Cassius after shanking Caesar. 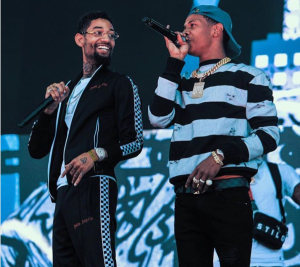 The thing is, this sudden condemnation of Boogie and PNB is just the latest example of the rotating goal posts that makes up what passes as Code of Ethics in Hip-Hop culture. There ia an unwritten rule against criticizing a fellow artist publically. Because there is so much money invested in mainstream artists, it can be damaging for an established artist to be critical, even with well-meaning intentions. It’s come to be framed as “hating,” especially when it concerns a veterab being critical of younger musicians. Generally, it’s expected that if you don’t have anything positive to say, keep your mouth shut or give empty praise along the lines of “so and so is doing his thing” or “he’s bringing a different sound to the game.”

We have a few high-level examples of how it can go left. The Nas-Cam’Ron beef started back in 2002 because Nas was bold enough to say on the radio that Cam’s breakout Come Home With Me album was “trash.” The entire quote goes “I like Cam, he’s a good lyricist, but the album is wack!” And from that statement we had a beef that lasted for years.

That is tame compared to these next examples. Let’s take E-40 and Biggie. Most know the main points of this confrontation. A magazine asked Biggie to grade emcees based on his personal perference. There must have been some good weed and liquor during that interview because Big was very candid about everyone (basically told KRS to GTFOH with that Teacher of Hip-Hop moniker). But 40 got the worst being ranked zero (“I don’t fuck with duke at all.”). Instead of handling it on wax like he did AZ and Rasheed Wallace (see “Record Haters“), 40 addressed it during a Biggie show in the Bay.

Biggie and his entourage were surrounded after the show by a crew of Oakland killers. Depending on who you believe, this was all set up by 40 or just local street dudes taking it upon themselves to defend 40’s rep. Peace was made on the phone, and Biggie was escorted to out of Oakland safely.

What happens when you don’t get a pass for a loose tongue? Look no further than Joe Budden’s brief feud with the Wu-Tang Clan. All that started from Budden taking umbrage with a Vibe emcee poll that ranked Method Man over him. Budden maintained that he had all the respect in the world for Meth, but that he’d destroy him on the mic (“I will chop that man’s head off his shoulders.”). Well, the Wu had other ideas. Inspectah Deck made a diss record, but Raekwon and a few goons took it further by assaulting Budden in his Rock the Bells dressing room.

We not the Britney Spears types. We’re not the Justin Timberlakes. We will whoop your fucking ass. You got niggas coming fresh out of jail looking for record deals. These are sociopathic muthafuckas. – Method Man

I could go on and on (Slowbucks vs. 50, G Unit jumping Gunplay, Dogg Pound’s “NY NY” video set being shot up, etc.), but let’s get back to Lil B. Because he’s become a fan favorite, you’re granted a certain immunity from the public against “lesser” artists. You could be dead wrong, but the general public will side with you because you’re the more known commodity. Because of his brand (the Lil B curse etc.), Lil B believed he reached a certain point where he could talk freely about anyone, even to the point of calling an artist like A Boogie, who’s just reaching his highest mainstream recognition, a knock-off of a female one-hit wonder. See below tweet:

I FEEL LIKE I REP NEW YORK HIP HOP HARDER THEN SOME OF THE ARTIST FROM NEW YORK! THESE NEW YORK ARTIST SOUND LIKE FUTURE N DEJ LOAF – Lil B

Lil B made the cardinal mistake that many emcees have made, and some fatally — Before you publically criticize or attack someone, make sure they’re playing by the same rules you are. Like Budden, you might open your mouth thinking you’re setting up a lyircal battle, and instead end up with a swollen eye (or worse). Not everyone is here to go back and forth on records in the time-honored battle tradition. A few would rather put hands on you as Lil B find out in his hometown of all places.

As much as we love Lil B, he isn’t exempt from an ass-whooping for running his mouth. We all love to say “Keep That Same Energy” when it’s not applied to one of our favs. If you found it funny when Gunplay was getting rag-dolled by G-Unit, Tru Life punching Cam, or understood why E-40 ambushed Biggie, then save the caping narrative for Lil B. Chivalry doesn’t exist in the streets. Choose your words and actions accordingly.