Skip to content
MONTREAL -- Despite a dramatic 12-round that featured Jean Pascal flirting with a stoppage defeat, the former light-heavyweight champion dominated a tentative and overmatched Lucian Bute to a unanimous decision before a sold-out, hot crowd at the Bell Centre..

MONTREAL — Despite a dramatic 12-round that featured Jean Pascal flirting with a stoppage defeat, the former light-heavyweight champion dominated a tentative and overmatched Lucian Bute to a unanimous decision (118-110, 117-111 and 116-112) before a sold-out, hot crowd at the Bell Centre. Bute was the overwhelming crowd favorite, but the repeated “Bute!” chants couldn’t overcome Pascal, who although utilizing his fighting in explosive spurts pattern, also displayed skillful countering ability that kept Bute confused and domesticated.

PASCAL’S THREE KEYS: The initial four rounds were a chess match with Bute scoring well with his jab and Pascal doing solid work with hard right hands to the body. However, Pascal completely walked away with the fight starting in the fifth behind these three factors:

1. THE WEIGHT: The main reason I picked Pascal by decision is I felt he’d have hard time adjusting to the natural strength and durability of a career light-heavyweight. That proved to be the case as even the Pascal haymakers that didn’t land clean had Bute stumbling backwards and reluctant to counter. In addition, when Pascal did land clean, Bute froze and was driven to the ropes where Pascal would work him over with 7-10 punch combinations.

2. FOUR-ROUND FIGHTER NO MORE: I interviewed Pascal for Knockout Nation earlier this week, and he was emphatic in stating that his tactic of exploding in spurts was not due to bad stamina, but a strategy to demoralize and dominate his opponents. I admit, I kind of snickered at that, but it’s hard to deny it isn’t intentional and more importantly, not effective. Pascal would take Bute’s best shots and played possum long enough each time that Bute, and many times the crowd, would think he was actually hurt. Then in the span of a few seconds, it was Bute frantically stumbling back on his heels after eating left hooks and overhand rights, or covering up on the ropes after being spun around by Pascal.

3. JEAN JONES MAYWEATHER JR.: Roy Jones worked with Jean Pascal and was in his training camp for this fight. The results were evident in Pascal’s sharp lead right hand that many times stopped Bute’s offense cold. Pascal varied the punch as a counter shot too, fighting out of a shell and popping Bute right down the middle ala Mayweather whenever Bute got bold enough to lead (Note: Pascal also worked with the Mayweathers for this fight). To make it more embarrassing for Bute, in the latter rounds Pascal literally looked in the other direction while waiting for Bute to get in range before popping off a quick right hand. 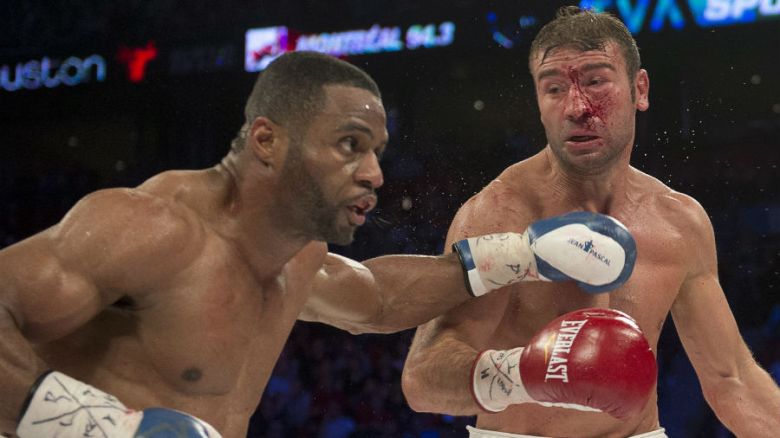 UNNECESSARY DANGER: Pascal flirted with disaster the last two rounds by taking his possum strategy to the extreme. While it  seemed like he just took the 11th off, Pascal started the 12th by letting Bute wail away on him in a corner for over a minute. The ref was out of sight of the camera, but you could hear him state several times for Pascal to “show him something,” indicating he was close to stopping the fight. Pascal never seemed alarmed by this and would simply lift his head up and nod to the ref that he was ok.

Considering the dubious calls we’ve seen in situations like this, it’s incredible, and downright foolish, to see Pascal taking a risk like that in a fight he was dominating. Nonetheless, Bute had been conditioned enough by this point to expect a strong Pascal flurry, so he was hesitant to really go all out. Pascal did indeed manage a big flurry at the round’s midway point, but it was Bute who closed the round in stlye with a few counter right hands to manage a moral victory of sorts for his fans.

PASCAL VS. STEVENSON: This is the next logical big Montreal fight, but Pascal didn’t seem enthusiastic to call out Adonis Stevenson, preferring to praise their comradery based on ethnic ties. It also important to note Stevenson is allegedly in talks to face Andrzej Fonfara next, which means Pascal might have to wait until the summer or possibly take Sergey Kovalev.

BUTE’S NEXT MOVE: If I’m Andre Ward, I’m kicking myself for not taking that Bute fight years ago. Many will say Bute is completely washed up, but that crowd reaction says fans north of the border are still willing to pay good money to see him. If I’m HBO, I put on a triple-header for my next Montreal card with Stevenson and Kovalev in separate bouts, and Bute getting one last chance to salvage his career against another former champion in dire need of a win, Chad Dawson.

MIKE PEREZ STUMBLES: On the undercard, Mike Perez was extremely lucky to walk away with a draw against Carlos Takam, who quite simply bullied and worked him over inside for the second half of their ten-round fight. Early on, Perez was the aggressor in feet only, coming forward but not being able to land many clean shots on Takam, who elected to fight off the backfoot with a low punch output. An accidental butt produced a bad cut on Perez’s left eyebrow in the third, and Takam slowly started to get confidence.

Takam upped his punch output and found massive dividends when he took the fight inside. As the much bigger fighter, Takam was able to muscle Perez to the ropes and sapped his energy with clubbing shots to the body. The judges had it 96-94 Takam and 95-95 twice for the draw. My score was a clear Takam win, 97-93.

Perez dedicated the fight to Magomed Abdusalamov, who Perez beat badly in November and put into a life-threatening coma. Although Abdusalamov is slowly going through the recovery process, it’s not a far-fetched theory to think Perez wasn’t in the best mental state headed into this fight. In addition, Abdusalamov was a massive heavyweight and landed his own heavy leather in that November fight. Considering that it’s barely been three months, the turnaround might have been too quick for Perez.

However you look at it, the one clear thing from this fight is HBO’s eagerness to paint Perez as a threat to Wladimir Klitschko was a complete “prisoner of the moment” stance.