Skip to content
When you talk about a professional career that spanned 21 years and 61 fights, there's bound to be some performances that flew under the radar. Today, Beats, Boxing & Mayhem presents six underrated wins from the career of the Greatest.

Today, Muhammad Ali turns 69 years old. It’s amazing to think how much the Ali legend has grown in what is now the 30th year since he’s hung up the gloves. Like any legend, a lot of myths have been mixed with the truth about his legacy, covering his political and religious beliefs, to what he actually accomplished in the ring. We all know the main facets of his in-ring career: the controversial Sonny Liston wins, the George Foreman upset, and the Fight of the Century and Thrilla in Manila wars with Frazier. But when you talk about a professional career that spanned 21 years and 61 fights, there’s bound to be some performances that flew under the radar. Today, Beats, Boxing & Mayhem presents six underrated wins from the career of the Greatest.

Coming into this bout, Muhammad Ali had made three title defenses in the past year against Sonny Liston (KO1), Floyd Patterson (TKO12), and George Chuvalo (UD15). The latter bout had been less than two months ago, and Ali had pissed blood after the battle due to Chuvalo’s well-executed body attacks. But the new champion wanted to remain active, and felt he had unfinished business with the powerful but limited Cooper.

In June 1963, just one bout before Ali would beat Liston for the title, he had faced the British Cooper in his native England. Ali dominated and clowned for most of the fight, until he got caught with a jarring left hook at the end of round four. Ali hit the canvas visibly dazed, but recovered in the corner and stopped Cooper in the fifth on cuts (as Ali had predicted before the fight).

However, Cooper made big noise claiming he would’ve won if the knockdown had happened earlier in the round. Plus, many pointed to the fact Ali got roughly 5-6 more seconds in between the rounds due to a torn glove.

In this rematch, there would be no Hail Mary shots for Cooper. Ali remained on his toes for much of the early rounds, peppering Cooper with long left jabs. When he sat down on his shots, he opened a gaping cut over Cooper’s left eye. This time, Muhammad Ali prevailed with a dominant sixth round stoppage. 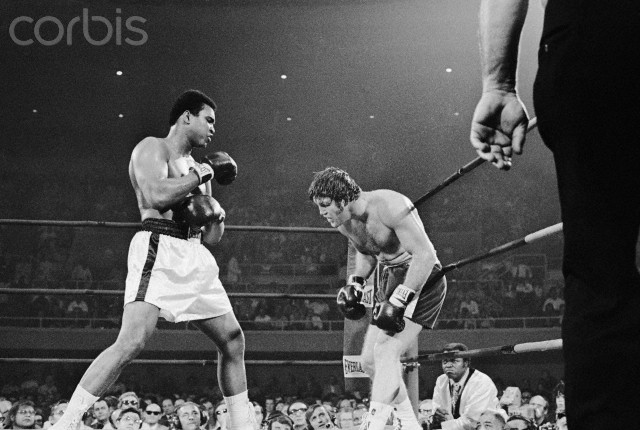 Having lost to Joe Frazier in the Fight of the Century one year prior, Ali was now in the middle of one of his best runs as a professional . From March 1971-February 1973, Ali would go 10-0 with 6 KOs. Because rematch negotiations had stalled with Frazier over money, Ali hoped to go through the Top 10 and eliminate all potential opponents for his rival.

Quarry had been the first man to fight a comebacking Ali in 1970. Ali’s speed proved to be too much, and he took an easy 3rd round TKO on cuts. But Quarry earned the rematch after going on a two-year, six fight win streak.

Despite showing a later ability to chop down bigger men like Ron Lyle and Earnie Shavers, Quarry still was no match for Ali. Quarry was a legitimate Top 3 fighter, being ranked by Ring Magazine as the #2 contender in 1971. But Ali simply toyed with him, clowning to the crowd and laughing off Quarry’s attacks. The jab was too hard and stinging, and Quarry was wary of being countered with the deceptive power of Ali’s straight right. Quarry took a slow beating before the referee ended the humiliation at the beginning of round seven, much to the satisfaction of Ali.

In recent years, we’ve seen a few southpaw heavyweights get to the championship level (Chris Byrd, Michael Moorer, Sultan Ibragimov, etc). Back in the 60’s, there had never been a southpaw to challenge for the belt until Ali signed off to face Karl Mildenberger.

Ali had fought just a month previous (an easy TKO over Brian London), and had difficulty adjusting his offense to Mildenberger’s stance. The German was also game, refusing to be intimidated by Ali’s speed and reputation. His biggest success came when he doubled Ali over briefly with a pinpoint body shot. The champ remained poised, and slowly began to land right hands more consisently, and even left hooks when Mildenberger got too reckless rushing in. After three knockdowns (rounds 5, 8 and 10), Ali earned a 12th round TKO. While he never trailed on the cards, Muhammad Ali would for years list this as his toughest stylistic fight, even over Joe Frazier and Ken Norton.

This fight suffers the misfortune of being sandwiched between two of the greatest fights in history: 1971’s Fight of the Century, and 1975’s Thrilla in Manila. Both fighters were still popular going in, but much of the transcendent luster had been lost. Frazier had been bounced off the canvas six times by George Foreman to lose his title in 1973. That same year, Ali had his jaw broken, and was soundly beaten by Frazier’s sparring partner, Ken Norton. In a rematch, Ali escaped with a close split decision.  As a result, both Ali and Frazier were viewed as having seen better days.

However, the hype went up the week of the fight when Ali and Frazier got into a scuffle during a Howard Cosell taping, reigniting the heated rivalry that surrounded their first bout.

Ali, much wiser and respectful of Frazier’s ability, came in with a sound game plan known as the “shock ’em and lock ’em” strategy. In the first bout, Ali would clip Frazier with shots coming in, only to be brutalized in return once he was trapped on the ropes. This was how Frazier rebounded to later wear Ali down in the first bout. This time, Ali would bounce back to ring center once feeling the ropes on his back, or immediately tie up Frazier. This strategy kept Frazier muzzled for most of the bout. By the time Frazier began to turn up the heat in the late rounds, Ali had enough energy to prevent from being overwhelmed.

While nowhere near exciting as their other two fights, this rematch is one of the best performances, strategy-wise and health-wise, Muhammad Ali had in the 70’s. Early on, announcer Don Dunphy even commented that both fighters were exceeding the pace of their first encounter. Frazier’s trainer Eddie Futch would later complain that Ali was allowed to hold too much. The referee, Tony Perez, would counter that Frazier used the clinches to rest. You decide. 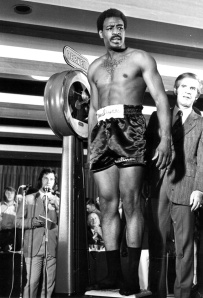 At 6’3, Muhammad Ali rarely fought fighters that could equal his height or reach of 80 inches. When he met the 6’3 Alvin “Blue” Lewis, The Greatest adopted a technique rarely seen from him, body punching.

Lewis utilized a high guard early on in hopes of picking off Ali pet jab-straight right combo. Instead of punching through the guard, Ali elected to focus his jab to the pit of Lewis’ stomach. He sat down on these shots, often in front of Lewis to maximize power. Ali was viewed as deficient when it came to inside fighting, so the strategy befuddled Lewis.

Ali’s uncharacteristic aggression paid off in round five, when he dropped Lewis with a straight right. Lewis would beat the count, and last until Ali stopped him in the 11th. A surprising performance from Ali.

This bout gets most of its attention for the infamous quote “What’s my name?” Ernie Terrell had drawn legitimate anger from Ali by insisting on calling him Cassius Clay. Initially, Terrell thought they were just hyping the fight. When he realized it made Ali irate, he continued doing it in hopes Ali would become careless on fight night.

It would prove to be a huge miscalculation on Terrell’s part.

At 6’6 with a good jab, Terrell represented the tallest fighter Ali ever faced. Early on, Ali was slow to mount offense while trying to figure out Terrell’s timing. Much like he did with the smaller Sonny Liston, Ali forced Terrell to lean forward when he jabbed. Through cat-like reflexes, he took away Terrell’s main weapon with his legs and head movement.

But by the seventh and eighth rounds, Ali was in complete control. He now ridiculed Terrell for his earlier taunts, asking him “what’s my name” after an especially punishing eighth round. Instead of pushing for the knockout, Ali continued the beating through the 15th, as he had promised Terrell and the media he would do.

Cruelty aside, the Terrell fight is one of Muhammad Ali’s best performances. It’s the best fight one can use when assessing how a prime Ali would match up with modern greats and giants like the 6’5 Lennox Lewis, and the 6’7 Klitschko brothers.