Skip to content
Antrum immerses you in two worlds that liimuniate the power and danger of myth.

When a project boasts the tagline of being “the deadliest film ever made,” one can argue the bar has been set at an impossibly high standard. You risk an extreme polarization of your audience between absolute hate and cult-like adoration. But for anyone who’s seen Antrum: The Deadliest Film Ever Made, you quickly realize this was never a film intended to play it safe within the established standards of the found-footage genre.

Antrum can generally be described as a “film within a film,” starting with a “mockumentary” on how Antrum’s alleged curse leads to it becoming a lost film during the 70s. Like the well-received Hell House series, we get details on mysterious accidents to several individuals. In this case, it’s critics who’ve seen the film and fall victim to bizarre deaths (dropping dead, ocean accidents with exotic fish, etc.). An Indian movie theatre burns down and kills everyone inside during a 1988 showing. And later, a 1993 San Francisco riot commences and results in the death of a pregnant woman.

The expectation from this buildup is the film will stay in the background. Instead, the initial 10-minute mockumentary is simply a buildup for the actual film, which has now been “rediscovered.” A very cool, immersive feature is the below “warning” (complete with a 30-second countdown) before the lost film plays. 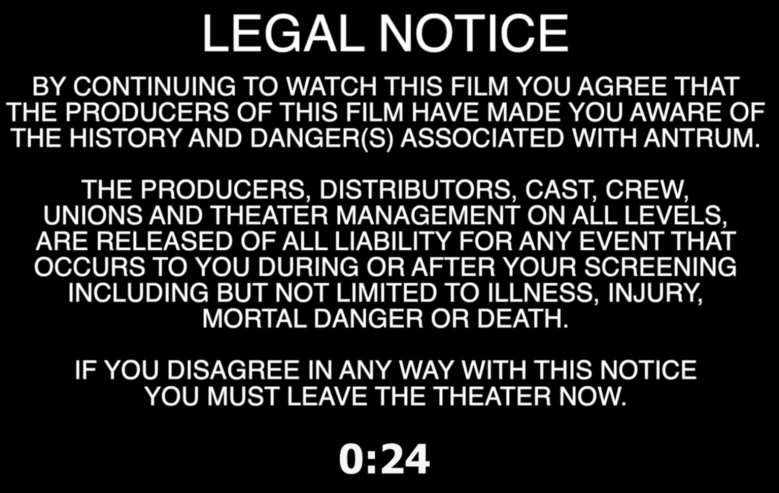 The story itself focuses on two siblings, Nathan (Rowan Symth) and Oralee (Nicole Tompkins), who venture out into a remote forest location to “dig a hole to Hell.” The reason for this foolhardy mission is the fact the young Nathan believes his dearly-departed dog is suffering in Hell (due to a cruel comment from their mother). Oralee comes up with the scheme in hopes of putting her brother at ease. She goes all-in, bringing props from the major religions, a faux pas Satanic book, and the pet’s dog collar she plans to stash for Nathan to “find.”

Unfortunately for the pair, things begin to go gradually go bad. First, it’s small mishaps like running into a suicidal man who planned to end his life quietly in the forest. Later, it’s an injured wolf prowling their campground. The heightened danger is reflected in book chapters which highlight for the viewer when the siblings symbolically “descend” into the next layer of Hell.

Although the mockumentary portion of the film tries to give you a heads up that Antra “slowly” gets under your skin rather being a constant shock to your senses, it doesn’t quite prepare you for how much of a slow burn you’ll have to withstand. It’s heavy on dialogue and seemingly mundane activities. Yes, the grainy, 70s-style presentation, unsettling music, and random, disturbing flash images (later explained as overlays added to the film by an unknown party) help to keep you engaged, it won’t be enough for some horror fans (there were 2 walkouts around this time at my screening).

The pace picks up after during the film’s climax, which finds the siblings kidnapped by a pair of occult worshippers heavy on human sacrifice. I won’t spoil how the two parties run into each other, but it’s not farfetched when you’re randomly wandering the woods.

The last 30 minutes does a superb job of blurring the lines between the real and supernatural worlds. The danger of myth-making is clear during the sequence when Oralee reveals the “lie” she made up of them being able to dig to Hell. By then, it matters little to Nathan — his mind has accepted the story as real and put up all the mental blocks required to accept it. Much like the zeal we see in religion and politics, there is nothing she can logically say to sway his mind and soon enough, she begins her own descent into madness.

Once the lost film ends, we’re briefly transported back to the mockumentary for additional folklore. We discover many of the film’s overlay images are tied to the Biblical-era entity Astaroth, which hints at that being the reason for the “curse” surrounding the film. As to who laid those images atop the original film, that’s something to be explored should this film get a sequel.

If you can tolerate a deliberately plodding pace over the first half, the extensive and unique mythology-building yields a strong payoff and poignant commentary on how misplaced belief can create your own literal “Hell on earth” despite whatever views you hold on religion. Antrum hasn’t killed me (yet), so I’ll test my luck with a second viewing.

Antrum: The Deadliest Film Ever Made, is available now on VOD and Amazon.