Skip to content
For the first time, an all-Mexico showdown will commence this year on Cinco de Mayo. 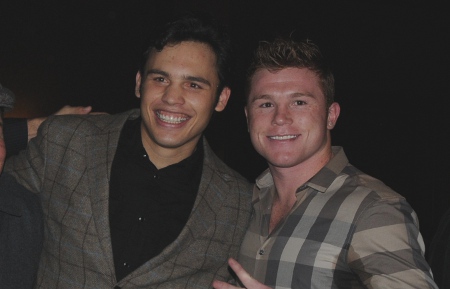 For the first time, an all-Mexico showdown will commence this year on Cinco de Mayo when Canelo Alvarez takes on former WBC middleweight champion Julio Cesar Chavez Jr. The event will air live on HBO pay-per-view May 6.

The fighters had been deep in negotiations the last with month with both sides having no qualms about going to the media whenever talks stalled. A breakthrough happened this week when Chavez Jr. stated he was willing to agree to a 164.5 pound catchweight stipulation.

“I dedicate this fight to Mexico,” said Chavez Jr. “I’m going to win, but my country will too because this is the fight that boxing needs.”

“I’m excited to announce my fight against Julio César Chávez, Jr. and confirm that I will be prepared, like I’ve been throughout my career, to give a great fight,” added Alvarez. “I want to remind you that when two Mexican fighters face-off, a spectacular show is guaranteed, and I can assure you that May 6 will be no exception especially during the Cinco de Mayo festivities.
Cinco de Mayo and Mexican Independence Day in September are important dates for us Mexicans, and I’m expecting a great night for boxing and the whole world.”
At press time, the Las Vegas venue for the fight has not been determined.