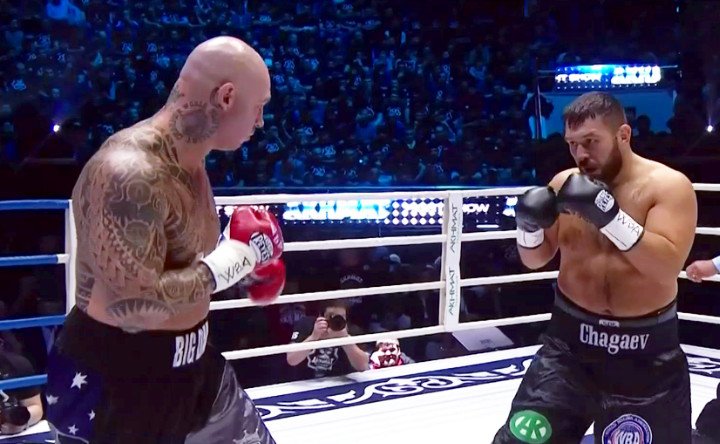 Browne relied on his three inch height and reach advantage to work from the outside and off the backfoot. Chagaev utilized his superior speed and accuracy to score with short southpaw lefts and hooks inside. In the fifth, Chagaev briefly wobbled Browne with a looping left hook.

That punch made Browne more aggressive, prompting the two heavyweights to pick up the pace and exchange shots. Chagaev excelled in the middle rounds with better combination punching and floored Browne with a right hook to the body followed by a left hook upstairs.

An atmosphere of determination took over the seventh. For Chagaev, it concerned finishing what he started in the sixth. For Browne, it was the desire to land a big shot to reverse the tide. Both men delivered big shots, but Chagaev’s offense stayed consistent and inflicted more damage.

With less than a minute remaining in round 10, Lucas finally landed a flush right hook that sent Chageav toppling to the canvas. His legs gone, the former champion could do nothing by lay on the ropes after rising. Browne rained down non-stop hooks to force the referee stoppage with 30 seconds remaining.

The win improves Browne’s record to 24-0 (21 KOs) and awards him the “World” version of the WBA heavyweight title. The “regular” title is currently held by Tyson Fury. Chagaev falls to 34-3-1 (21 KOs), suffering his first defeat since dropping a unanimous decision to Alexander Povetkin in 2011.