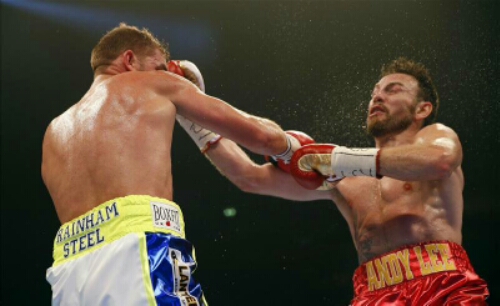 MANCHESTER — Securing two knockdowns in the third round proved decisive for Billy Joe Saunders as he defeated Andy Lee tonight for the WBO middleweight title at the Manchester Arena.

What was billed as an all-action fight turned out to be a slow-moving chess match with little sustained punching. After two close opening rounds, Saunders dropped Lee twice in the third via counter right hands. Although badly hurt, Lee managed to survive. Rather than capitalize on his advantage, Saunders would maintain a wary respect for Lee’s punching power for the remainder of the fight.

In the championship rounds, Lee was the aggressor but he couldn’t land any clean shots outside of sporadic hooks to the body. One judge had it even (113-113), but was overruled by scores 114-112 and 115-111. The majority decision win gives Saunders his first world title, and options to unify with fellow titlists Danny Jacobs (WBA World) and Gennady Golovkin (WBA Super and IBF), or a rematch with Chris Eubank Jr.

The fight wasn’t a dust-up, but you have to be happy for a hardworking guy like Saunders. As with any new titlist, the task switches to finding the right opponent for the first title defense.

Gennady Golovkin? Also not likely. GGG’s goal is to unify all the belts, but it’ll take a huge amount of money to make Saunders come to the U.S. Golovkin was able to entice David Lemieux by offering him a career-high payday, which is why that fight had to be on pay-per-view. That card broke even with 150,000 buys. Unlike Lemieux, Saunders has never fought on HBO and is relatively unknown to most U.S. fans. A pay-per-view to up Saunders’ purse wouldn’t give the promoters a profit.

Danny Jacobs? This one is possible. The fact that Showtime aired this contest lets you know they have interest. Danny Jacobs just destroyed Peter Quillin on their airwaves and could up his stock even more by adding the WBO title to his ledger. Showtime might not be willing to pay Saunders big bucks, but PBC creator Al Haymon might be willing to part with the money necessary to make this happen. But again, Jacobs-Saunders isn’t going to bring in huge ratings whether on PBC or Showtime due to Saunder’s name value in the U.S.

Chris Eubank Jr.? Consider this one highly probable. In recent statements, Saunders has given off the impression he’d rather keep the title in the UK. Eubank is coming off a big win over Sullivan and a Saunders-Eubank rematch would do numbers as a domestic grudge match. In addition, Saunders being the champion and winning the first bout gives him a bigger slice of the money split. The fight makes perfect sense financially and style-wise for Saunders. I’d be shocked if this fight isn’t made by the spring.